Maintaining Your Purchasing Power In A Crack-Up Boom

Home » Articles » Maintaining Your Purchasing Power In A Crack-Up Boom 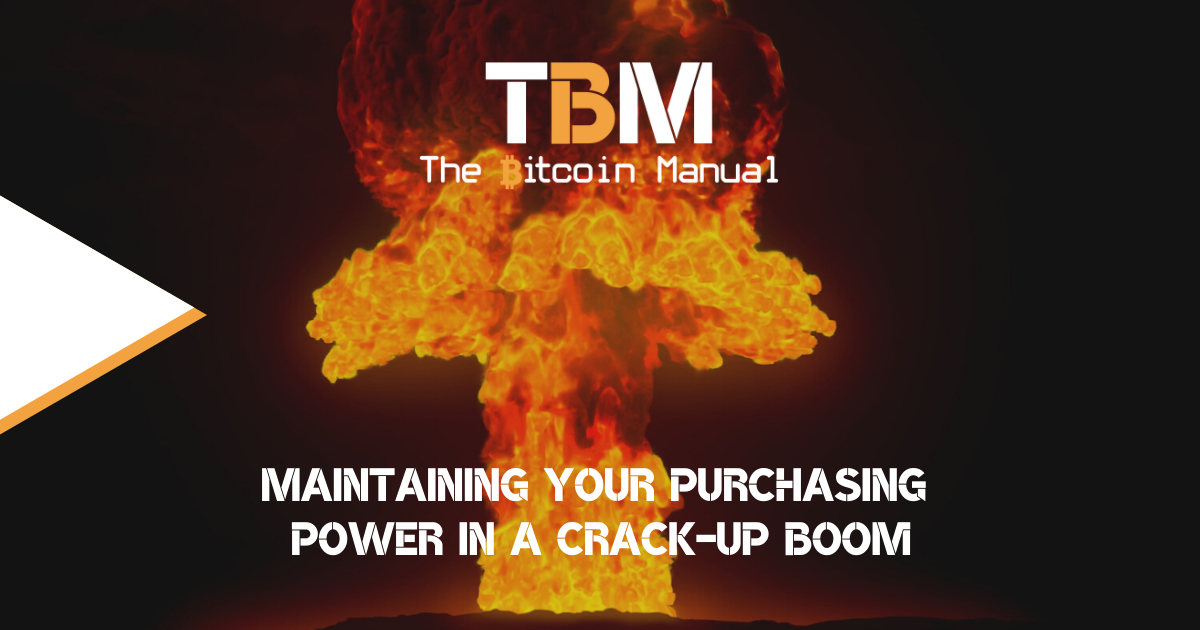 I’ve traditionally been a saver; I never did much investing apart from the various index funds and retirement funds that are spoon-fed to us when we start working. I purchased a few stocks in my time but never traded a hare.

The stocks I have were local companies that kicked off dividends; I was drawn towards value investing over any trading.

As a “previously disadvantaged” South African, listed companies are encouraged to increase “black” ownership, and there were several offerings that assisted investors like me. Since we were previously excluded from the market, this was a method to fast track ownership.

I didn’t understand it then, but it sounded like a good deal, and I signed up. Most of my capital would be saved in cash to take positions in other index funds.

I never questioned it.

I was too busy trying to gain experience and work my way towards a higher income. I always thought that once my income increases, I would have my base generating consistent returns and take more risk.

One of those risks was, of course, Bitcoin, and boy did that one throw me for a loop. It forced me to learn and take responsibility for my future; I was awoken from this routine lull many working-class folks find themselves in, never questioning the investment formula they’ve chosen.

Now I cannot speak for the whole country but for the people I’ve come into contact with, investing is not something people do. They save in cash, buy real estate and contribute to their pensions; that’s the extent of it.

Over the years, as inflation continues to erode your fiat and fiat-based investments, I’ve noticed a trend towards investing. People are starting to take an investment in buying local stocks, trading stocks and forex.

I was pretty shocked to see how many working-class friends were trading commodities like gold, oil or US stocks. I don’t want to sound condensing, but these are people who I would never think would be an active investors.

The need to preserve wealth naturally forces people further out the risk curve, and anything offering yield is considered an investment. There are plenty of people shitcoining

Due to the lack of financial illiteracy in the country, scams are a dime a dozen. I know several people who were roped into Ponzi schemes, using a pitch of traditional investing like bots or the promise of gains in the cryptocurrency market.

The pitch of the vehicle is different, but the scam is the same. You give me a small amount, and I’ll 10x it in a month, when in fact, they’re simply running away with your money and showing you paper gains on some dashboard they control.

The proliferation of scams and fraud is always a great indicator of the trend towards a crackup boom.

A factor that encourages the path towards a crackup boom is when money is so bad at holding a value that people are willing to take any risk to maintain their purchasing power.

The ingredients for a crackup boom.

The global economy has been on life support since 2008, and we’ve been living on borrowed time through money printing ever since the GFC (Global Financial Crisis). Kicking the can down the road seemed like a solid policy until the shutdown in 2019 that did wonders in shrinking the economy, and we’re still coming to terms with the effects.

To kick start the world economy again, governments worldwide are co-ordinating the largest money printing exercise the world has ever seen. As new currency units are made available, it dilutes the purchasing power claims of all units.

As this trend continues, people become desperate to try and store their value somewhere, and they bid up prices of assets. As assets begin to skyrocket, it causes a feedback loop that drives a loss of faith in the currency.

What is a crackup boom?

The concept was developed by Austrian economist Ludwig von Mises who refers to a crackup boom, a specific type of economic crisis. The crisis involves a recession in the real economy and a collapse of the monetary system. The collapse is due to continual credit expansion and resulting in unsustainable, rapid price increases.

The crackup boom is characterised by two key features:

Unit bias is a sure way most people lose money in any fiat market conditions. We are so tied to the number of currency units we hold or earn, and we do not consider what they can purchase us in the future. As the currency continues to lose value each year, that is an opportunity cost lost in acquiring more of another asset.

People will hold on to their currency and take the brunt of inflation or invest in assets thinking they have some protection, but the return does not exceed monetary inflation. So while your currency units are increasing based on the investments you hold, the relative purchasing power is decreasing even faster than the amount you can accumulate.

Staying ahead of inflation.

In a crackup boom, your primary goal is to preserve your purchasing power. You are not trying to make money. You are trying to maintain what you’ve already earned. Traditionally people have sought shelter in more stable fiat currencies or precious metals. The reason they do this is that assets like companies and real estate can only capture so much of the monetary premium before they are overvalued.

Once there aren’t enough bidders to continue to drive up prices, even the appreciation in these assets can be captured by the increase in monetary inflation.

Keeping this in mind is why Bitcoin is the best tool for maintaining your purchasing power in a crackup boom. Since it is finite and no one can create more or issue more than the protocal allows, it can continue to receive bids from the market and capture more of the monetary premium looking for a home.

South African bitcoin pleb falling down the rabbit hole and willing to share every bump, scratch and knock along the way
View more articles from this author
PrevPreviousPoliticians Pandering To Bitcoin Plebs
NextBitcoin “Sorry” For Bank of EnglandNext