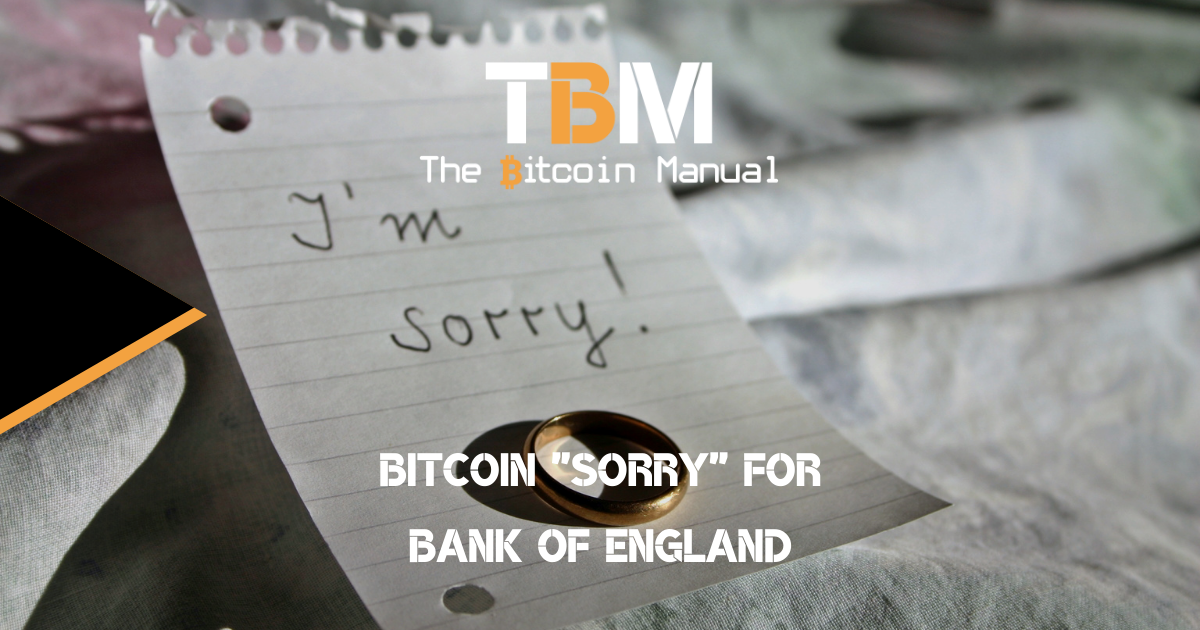 I was just merrily getting on with my day job yesterday and up popped a string of mainstream media articles around the Bank of England. I thought to myself, “What are these charming people in charge of UK’s monetary policy up to now?”

According to the pap, the Bank of England governor said he is “very sorry” for the rise in inflation and increased living costs in the UK. Hmm… I don’t know about you but as soon as I read that, the hashtag #sorrynotsorry came to mind followed by the InBetweeners scene! Like, is he really sorry? At all?

In July, they rolled out “bank bail-ins” where templates were sent out from the Bank of England to all high street banks and building societies to basically take money out of customer accounts (i.e. you and me) if needed to help them stay afloat. Wonder if he’s going to be sorry about the impacts of that in 2022 if bail-ins are used.

As always, DYOR on this to make sure you have a rounded view and not just taking the opinion from some guy writing articles online wearing a hoody and jeans!

In March 2020, we all saw our interest rates in savings accounts go down to pretty much 0. The base rate was set at 0.1% but you know how it is. Banks will happily take the mickey and give you 0.1% (or 0.01%) but charge you upwards of 18% interest on your credit card bills if you can’t make the monthly repayments. Oomph…

The official reported inflation from these articles I mentioned is going up to “5% in the short term“. But we all know that 5% isn’t exactly a true number. For every day people like you and me, a quick scratch at the surface shows a different story to this “5%”.

House prices themselves went up 13.4% in the year after the pandemic hit, gas and electric prices have gone up 250% since January 2021 and supermarkets have been ramping their food prices up by 27% in some cases.

Anyway, let’s say that the inflation rate is 5% for arguments sake.

When you weigh this up with having a savings account at 0.1% then you are basically taking a pay cut of 4.9% each year just by parking your hard earned money in one.

Sure, you still have the same number of £ in your bank account but what those £ can buy you in 12 months becomes 4.9% less effective, assuming no changes in inflation.

This is what we mean when we harp on about purchasing power on TBM.

I don’t know about you but that doesn’t sit easy with me.

After those low savings rates were announced in March 2020 and seeing my purchasing power to buy my own house literally disintegrate in front of my eyes, something finally activated in me about Bitcoin. This has then morphed in to a firm belief I have that Bitcoin is the best long term savings account going.

Thankfully, as the inflation rate of Bitcoin is already programmed in and hasn’t changed since it launched in January 2009, we know what we’re getting.

No need to hear apologies from anyone as more Bitcoins can’t just be magically printed out of thin air. Although that’s mainly because Bitcoin doesn’t have a mouth! It’s just a technology that records transactions between one wallet to another and its inflation rate is set in stone.

What this does mean is that anyone can verify and see what’s going on under the hood if you really wanted due to the open and public nature of the tech. An openness and transparency that isn’t apparent with our apologetic friends at BoE.

The name of the game of saving or growing your purchasing power is to find ways to beat inflation over the long term and a traditional savings account is proven not to help with this at all.

So this means you are going to have to take some risk with investments in various things to keep up.

As seen above, having a house over the last 18 months would have kept you above that 5% although that money is locked up in bricks and mortar so access to that is limited i.e. not liquid unless you remortgage it.

However, I prefer saving in Bitcoin as it’s more liquid should I need to access it but I wouldn’t want to sell it and incur taxes. Bitcoin is classed as an asset in the UK so this is something to be aware of.

Instead I’m adopting the forever HODL approach, whereby I’m saving my £ by buying Bitcoin and borrowing against it for when I want to make a major purchase in the future like getting my own place. This means I don’t have to sell my BTC and get those sats back once I pay back the loan.

In the meantime, I’m leaving some £ behind to live in the present because life’s short and you need to have some lifestyle. Any spare cash at the end of the month goes in to the Bitcoin pot.

This is what I’m comfortable doing now but it took time to figure out, research and do what I can to hopefully make life a little easier in the future. Whether it will work or not, I don’t know but as always, Do Your Own Research. I’m just trying to keep ahead of the inflation curve with Bitcoin, for which I will make no apology for.

British bitcoin pleb falling down the rabbit hole and willing to share every bump, scratch and knock along the way
View more articles from this author
PrevPreviousMaintaining Your Purchasing Power In A Crack-Up Boom
NextThe Importance Of A Regular BTC Security CheckNext