Why The Plebs Matter Most

Home » Articles » Why The Plebs Matter Most 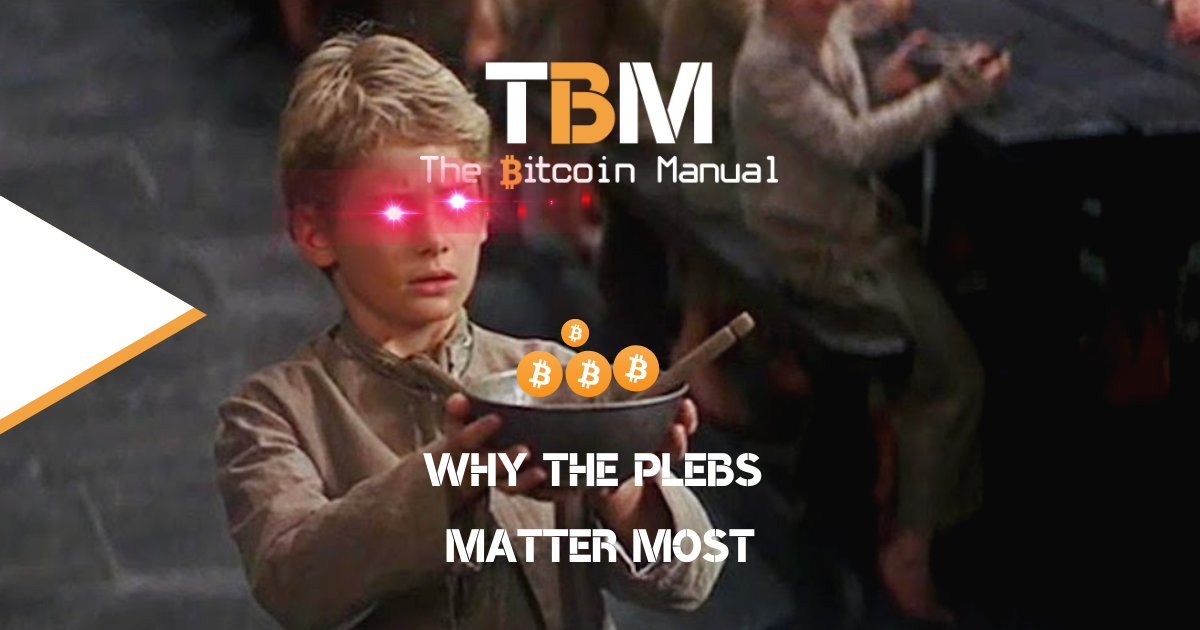 I don’t pay much attention to the drama that goes on in the Twitter space since I am but a humble pleb shouting into the pillow that is a tiny Twitter following and the majority of bots that do bother to engage with my content. The bear market erases a lot of the cheer and dopamine hits you get from visiting Twitter, and once that subsides, it can quickly devolve into screaming matches, with most of them being pretty harmless and uneventful.

It reminds me a lot of schoolyard gossip more than anything else.

However, one incident did come across my feed of a certain “cryptocurrency affleuncer” (affluent influencer) ranting with his fellow thinkbois stating that they’re not interested in talking to bitcoin plebs because they are not his customers, they don’t invest in his funds, so why should he be bothered?

A sentiment that is well within his right, and sure the average person shouting on Twitter probably doesn’t have that much disposable income that they can piss it away on private equity deals and think nothing of it, but that doesn’t mean they have no value.

I would say plebs have more value than you think.

Plebs are your customers

While they can live in their ivory towers and sniff their crafted narratives wafting in the office, the truth is plebs are at the end of the value chain; they make or break the company. If you cannot convince enough plebs to become customers that cover your expenses, you’re going the way of the dodo.

Plebs are your marketing department

Bitcoin and the wider digital asset space is one of tribalism, and if you play in this space, you will hit a wall known as the bitcoiners or bitcoin maximalists. This cohort of people can be your worst social media and PR nightmare if you’re building rug pull technology or not doing things above board, or they can be an amplifying force for your product or service.

Plenty of bitcoin-only companies enjoy the free marketing that plebs provide; they take the time to use your product, build documentation and tutorials, and teach others how to use it, which is something no ad campaign can give you. Plebs actively lower bitcoin companies’ marketing and user question costs and amplify the organic reach of your company’s messaging.

TBM isn’t a company, just a hobbyist blog, and the only reason my blog posts get any views is because of plebs who took the time to read them and share them with their friends.

If you create a product that the plebs find helpful, you can rest assured they will amplify your message further than your marketing budget ever could. As they say, there is no better marketing than word-of-mouth marketing.

Plebs test out your products

When you launch a product in the bitcoin space, you’re going to get pleb users and feedback like it or not; they are enthusiasts; they are going to support projects that match their worldview and ethos and warn their network to say away from certain products and services.

Before you can even push out a press release, set up your ad campaigns are start paying for podcast interviews, the plebs will be sharing their thoughts on Twitter, meet-ups, and instant messaging apps and having that translated into different languages.

Your product is nothing without user data. You need to see how customers use it, how they struggle, where the pain points are and then match it with qualitative feedback, and who do you think will offer you that feedback at scale? The plebs, obviously.

If you’re a company that runs a P2P service, then plebs are your inventory; they provide the liquidity on both ends and fill up your order book, so if you’re going the P2P route, you’re actively signalling to the plebs, that your product is nothing without them.

The reason bitcoin can have these massive dumps and rips is because we have single market actors with a massive amount of bitcoin, looking to buy or sell, and they can move the market in the direction they prefer. As more plebs get involved every time these large holders sell, the plebs provide the floor; they break off pieces of bitcoin and reduce the whales’ ability to retain the same amount of bitcoin without committing more fiat.

Plebs are the buyers of last resort; when bitcoin takes a tumble, you’ll see plebs jump into the market like piranhas willing to swarm around that liquidated bitcoin and gobble it up.

If you want to build and fund builders in this ecosystem, there needs to be a decentralised network to build on top of, or the entire promise of this space goes to zero. If it wasn’t for the bitcoin network, none of the other products would have a reason to exist.

One of the reasons bitcoin continues to exist is because it’s meaningfully decentralised; when all products and altcoins fail, bitcoin will still be around because thousands of people worldwide are willing to run a copy of the bitcoin source code and save a copy of the time chain. Bitcoin is demandingly decentralised as thousands of people monitor the network and enforce the rules from their computer or a dedicated bitcoin node.

You could copy the infrastructure and run thousand of nodes on AWS, but that would only be decentralisation in numbers and not in nature.

You can’t have meaningful decentralisation without the plebs.

Plebs are the reason VCs back founders

When a founder goes over to a venture capital firm to pitch for funding, they use a lot of technical buzzwords and marketing jargon; they copy and paste a few meaningless stats about growth in a certain market and why their product can either ride that growth or address issues in that growing ecosystem. In venture capital land, the talk is all about the product, but ultimately VC’s invest based on the number of plebs a product can attract.

How many users, how many customers, what is the life cycle of the user, the retention, the average spend, and the cost to acquire a user? That’s what drives private equity to back a product and continent to back it in future rounds.

Plebs are the collateral in the private equity game.

The more users you get and the more you get them to spend, the more you can justify ridiculous valuations when you raise capital.

Plebs are the VCs of tomorrow

If you believe in the bitcoin thesis, then you should consider the fact that the plebs of today stacking for tomorrow are going to command a massive portion of global capital in the future. They will be wealthy individuals, so would it not behove you to get them on your side?

Many of them may not have the material wealth in today’s terms to be an angel of venture capitalist, but who is to say as bitcoin breaks new barriers in purchasing power, as bitcoin becomes more scarce, as the world cries out for sound collateral, that these holders won’t be the ones you need to vaccine to back your startup idea and fund it, or invest in your fund?

It would seem rather short-sighted, in my opinion, to dismiss people who are committed to growing their net worth and would be looking to deploy it in businesses that match their ethos and view of the world.

If the product you’re building doesn’t need plebs to use it, then who is it for? If it’s a B2B product, I am pretty sure that downstream there is a consumer-facing service or product that would push revenue upstream to the B2B product, so in what world would plebs not be your source of income?

The only reason I can think where plebs would not matter to you is if you’re building something that would be government-funded, sold to the government, or the government is your only customer, or you’re building rug pull technology which was never about the customer, but extracting liquidity from the market without having to provide goods or services, which the altcoin market has proven is a pretty profitable venture.

If that’s the products you want to fund and build, by all means, I’m not here to tell anyone what to do with the time and money they have, but I hate to break it to you that building something useful for society isn’t going to come without pleb involvement.

You have to please the plebs eventually

You can build the best-looking product with amazing features and keep your costs as low as possible, but if you don’t get the plebs on your side to use it, you are dead on arrival, and your product will fail.

Unfortunately, the fiat system created a pleb majority world, and those plebs are slowly moving into bitcoin; as they move into bitcoin, the pleb army grows. So if you have an issue with the plebs, I recommend you get over it because they are not going anywhere.

They’re only going to get bigger, louder and wealthier with time.

South African bitcoin pleb falling down the rabbit hole and willing to share every bump, scratch and knock along the way
View more articles from this author
PrevPreviousInflation Is An Insurance Premium Against illiquid Markets
NextBitcoin Is UbuntuNext