What Is A Bitcoin Interest Rate?

Home » Articles » What Is A Bitcoin Interest Rate? 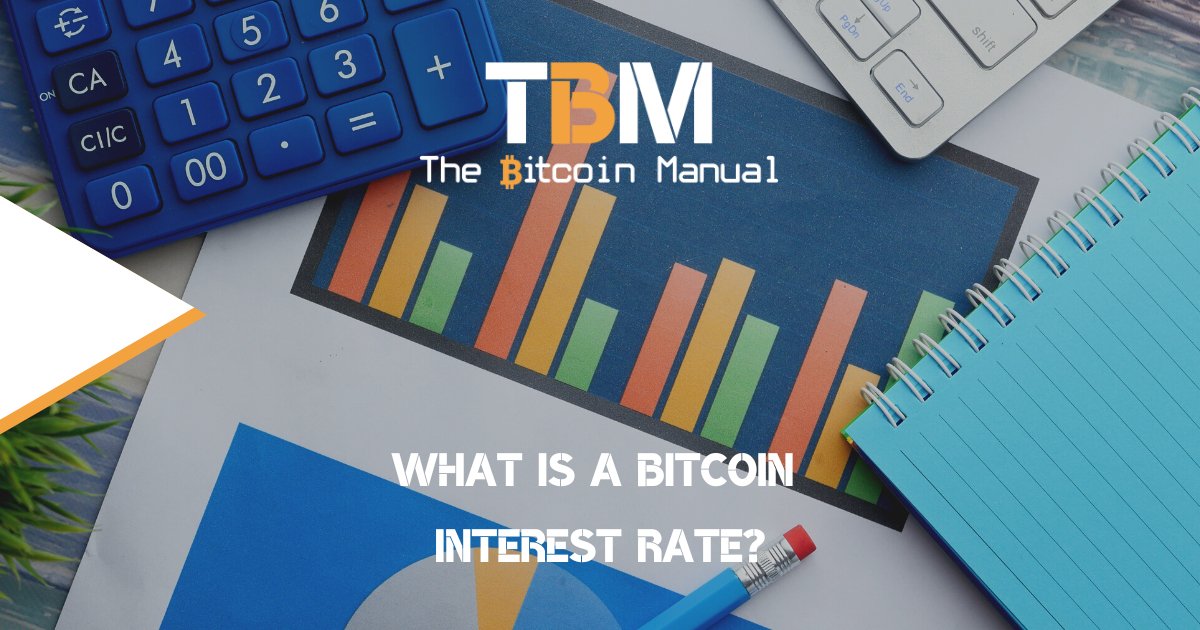 In the fiat system, we’ve all become accustomed to the idea of interest rates; we’ve all been taught that you could save your money in a bank and in return for trusting the custodian with our funds, we would be paid an interest rate. An interest rate is an amount a lender charges a borrower and is a percentage of the principal—the amount loaned. The interest rate to access funds is typically noted annually, known as the annual percentage rate (APR).

In bitcoin, however, there is no interest rate, which leads many traditional investors to label it an “unproductive asset”.

Is bitcoin an unproductive asset?

An unproductive asset is one you own with only one way to profit by having someone else pay more than you paid for it. In the case of bitcoin short term, you’re either trying to capitalise on momentum trades, sentiment or competition for the float to try and trade for a profit. Long-term holders, however, are banking on the increased adoption and the network effect and scalability of bitcoin. As more holders of bitcoin join the network, the more trade bitcoin facilitates, the higher the use of bitcoin, and the more valuable it can get.

The more individual institutions that accept bitcoin, the better the networking effect, but since bitcoin itself doesn’t generate an income; it is often labelled an unproductive asset since it has no cash flow.

In a world of fiat money, we’re encouraged to seek out cash flow to offset inflation, but with bitcoin, we know the inflation rate, which continues to decrease over time. There is no need to try and outpace inflation by taking on risk since the price appreciation or, rather, the purchasing power of bitcoin far outstrips its dilution by new issuance.

Does this mean that Bitcoin and crypto are a Ponzi scheme? Of course not, Gold doesn’t produce any tangible values either but has maintained its purchasing power over thousands of years. If you own one bitcoin today, you still only own one bitcoin in 2030; your ownership in the network is never diluted you have 1 of 21 million bitcoin.

Attracting liquidity out of cold storage

If the bitcoin thesis is correct and it continues to increase in purchasing power simply by holding it, then the incentive to go out and deploy capital and take on risk to try and earn a return is extremely low. Why would you want to earn 1, 2 or even 5% if the asset you’re holding has a compound annual growth rate of 10 times that simply by holding it?

The incentive is to take money off the table and secure it in the best way possible. The only way to get that bitcoin to move from cold storage is to tempt it into an ecosystem that improves the network in some way, shape or form and also pays you interest for your service as a liquidity provider, and this is where bitcoin interest rates come into play.

Establishing a yield curve with a risk-free rate for bitcoin.

Risk-free doesn’t mean you are taking on zero risk but rather a minimal risk when compared to other options available for netting a return on your capital. When you conduct on-chain deployment of capital, you retain ownership of the funds as you are the only one who has the right to sign that transaction via your private key, but there are ways you could lose that capital.

There is simply no reward without risk, and that is why these applications need to provide you with an incentive to attract bitcoin out of the safety of cold storage and into these markets. Since you have complete control over your funds, you can always increase or reduce your exposure to the risk at any time by paying the on-chain fee to move those funds back to cold storage.

So what kind of offerings would form part of the bitcoin risk-free rate?

The Lightning Network is a second-layer solution for routing micro-payments and requires bitcoin users to lock bitcoin into the network. The more bitcoin and the larger the size of the channels, the easier it becomes to route payments, and the faster and cheaper settlement becomes on Lightning. To attract users to provide liquidity services such as Lightning Pools and Magma are providing Liquidity Pools where routing nodes can access additional liquidity when needed and pay a return to those who provide these funds.

As the Lightning network grows, so will its demand for bitcoin. If the supply in these channels isn’t enough to meet network demands, the network can respond by increasing interest rates to attract capital from on-chain users to lock into Lightning.

Bitcoin privacy has come under pressure as chain surveillance companies, and KYC on-ramps continue to make it harder for bitcoiners to move their funds without it being tied to their identity. Thankfully many privacy solutions are in the works, and JoinMarkets is a possible solution which allows you to hide your transactions in a crowd. In order for JoinMarkets to have enough capital to hide your transactions with a bunch of other transactions, it requires a certain amount of liquidity. If there isn’t enough to go around, the privacy of certain users is impossible.

By providing an interest rate, join markets entrance liquidity from exchanges and cold storage into their ecosystem to help mask payments. Those who use the JoinMarket for privacy pay a fee to those willing to put up their bitcoin to help obfuscate payments.

The Liquid Network is another bitcoin side chain aimed at traders and those wanting to issue stablecoins and securities that are settled on bitcoin rails. As more assets are listed on the Liquid network, the need for bitcoin as a trading pair will need to increase to allow trades to settle. For example, trading pairs like L-USDT to L-BTC and L-CAD to L-BTC can be set up using Liquidity Pools.

As users require funds to trade between stablecoins or STOs on Liquid, the need for bitcoin will fluctuate, and interest rates will be established for these different markets. Users may be tempted to supply capital for these liquidity pools and earn a return from the trading fees earned when users trade between these different liquid-based assets.

Another option for those looking to earn a return on their bitcoin is to go full “risk on” and hand over their funds to a custodian. These custodial services would then have complete ownership of your funds and look to deploy it with various trading strategies, hypothecate or rehypothecate your funds to try and earn a return and provide you with compensation for the risk you’re taking, which is why these services might offer you a higher interest rate.

Once you hand over funds without keys, you have no say in how that capital is used; you are at the mercy of the custodian and how they operate, so you need to take this into account before becoming an unsecured creditor of any service.

We’ve seen many yield-offering platforms go bankrupt in recent years, and this is a real risk you’re taking when using these services. Remember, not your keys, not your coins, so if you’re comfortable with having bitcoin IOU for the sake of a few extra basis points, know that there is a possibility that a partial redemption or, worse, no possible redemption is a likely outcome.

Placing capital on the playing field to earn a yield

In this early stage of bitcoins, monetisation and price appreciation, the search for yield on your coins might not be a very attractive proposition unless you are a trader or enthusiast who would like to support the growth of the bitcoin ecosystem by taking on a risk. For most people, it makes very little financial sense to go out and risk your funds when you could miss out on massive price appreciation.

However, once bitcoins annual returns start to decline, these interest rates might become more attractive.

If you are looking at interest baring products on bitcoin, you need to weigh up the risk and reward and size your positions accordingly. Remember, even the on-chain yield products are in their early stages, the software and monetisation models have yet to be fully fleshed out, and as an early adopter, you’re taking on that risk.

Do you have any interest in earning interest?

Does earning interest on your bitcoin sound like an attractive proposition, or do you think it is a greed-driven activity? Have you deployed bitcoin into the market to make a return? Which method did you use? Are there other interest-earning options for bitcoin that you think should be considered? Let us know in the comments down below.

South African bitcoin pleb falling down the rabbit hole and willing to share every bump, scratch and knock along the way
View more articles from this author
PrevPreviousBitcoin App: Jam
NextBitcoin App: SatsoverflowNext