What Is A Bitcoin Fire Sale?

Home » Articles » What Is A Bitcoin Fire Sale? 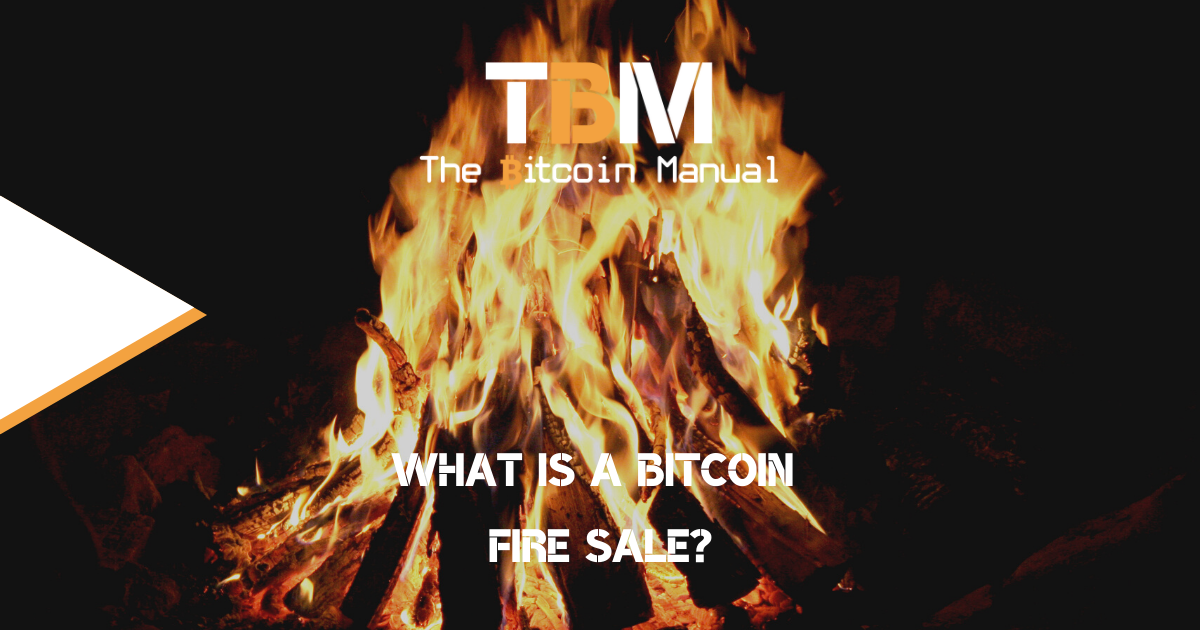 For many of us, our first interaction with bitcoin will be with a centralised exchange; you would create an account, fund your exchange wallet and purchase your first bitcoin at a price you think is a good entry point. From there, you can choose to leave your funds on an exchange hoping to sell it at a later stage for more fiat than you paid or remove that bitcoin to a wallet where you hold the keys.

Holding your own keys requires you to transfer bitcoin the asset directly from person to person, also known as peer-to-peer via bitcoin the network, and then only do you truly interact with bitcoin. The cryptographic transactions are verified by a network of people and recorded in a public distributed ledger called the blockchain or time chain.

When you use bitcoin on the network, once a payment is made, it can’t be reversed, and if you lose your wallet, you lose your bitcoin. This is the innovation that bitcoin brings, but most newcomers don’t get to take steps to experience it and rather focus on the price the asset can trade for on these secondary markets run by exchanges.

Most people do not realise that the Bitcoin network is a separate entity from the traded markets and therefore associate the network’s health with the price it trades for on these exchanges. This gives exchanges a considerable amount of influence over investor perception and driving sentiment.

The bitcoin float traded on the open market does not represent the network; it is only an indicator of the amount of fiat users are willing to pay to hold value on the bitcoin network. Since only a fraction of bitcoin hits exchanges and it determines the price, the trading of the float can see massive swings in volatility and in extreme cases, we see traded bitcoin sold at heavy discounts.

What is a fire sale?

A fire sale is when market actors seek to offload assets without consideration for the liquidity of the market; they are willing to sell at any price to offload their assets. As a result of constant selling pressure and no equivalent response from the buyer side, bitcoin reaches heavily discounted prices. These fire sales are usually brief periods where supply overwhelms the current demand due to some fear or distress in the market.

The term “Fire sale” originally referred to the discount sale of goods that were damaged by fire. Today it more commonly refers to any sale where the seller is in financial distress.

Why do bitcoin fire sales occur?

Fire sales are not a common occurrence, and since no one expects them or prepares for them, they might be brief, but they can be sharp declines that drive panic and fear. Trigging an avalanche of bitcoin dumping requires a major event, and here are some reasons fire sales happen.

The bitcoin price doesn’t go up in a straight line, despite what many traders may think at the time. During bull markets, it’s easier to get suckered into riskier positions thinking you can’t lose. If you’ve made a bunch of long trades that pay off, you’re often lulled into a false sense of confidence that you’ve figured out the market, and you can repeat the trick again, only with higher stakes.

When traders are at their most leveraged, they are sensitive to even the smallest price movements that can lead to cascading deleveraging. Let’s consider the following example, bitcoin has been trending upward for months with only 10% retracements, and traders have been hitting the money on this trade, buying up dips and leveraging long.

You could see traders overexposed since they’ve never been margin called before. These traders didn’t leave capital around in case of emergency, so they got liquidated. Once they get liquidated and forced selling occurs, it decreases the price further, pulling more traders into this deleveraging event.

As more traders get stopped from their trades, that bitcoin hits the spot market, and the sale of the year is on.

As a bitcoin miner, your incentive is to sell as little bitcoin as possible to run your operations and to hold on to your stack as long as possible. However, this is easier said than done during times when bitcoin prices are low, competition is high, or electricity costs are soaring, it can put miners in a tough spot.

They will need to tap into their bitcoin treasury to sell bitcoin, or worse, they will be forced to shut down and liquidate the entire operation, which can lead to fire sale prices.

Like any industry, bitcoin and crypto businesses will have a high failure rate; some might be due to poor business models, poor management, overcapitalisation or fraud. Regardless of the reasoning, when there are centralised entities that hold large amounts of bitcoin, be it their own treasury or customer deposits.

If a large entity in the bitcoin space ends up going bust, the assets might be locked until bankruptcy proceedings are complete, which can take ages. This can force loans to be liquidated; it can force assets to be clawed back and cause all kinds of havoc, which requires bitcoin to be sold to cover claims and losses.

The altcoin market has always been a parasite living off of bitcoin, using an affinity scam to trick naive investors into thinking they’re getting some improvement on bitcoin. During the best of times, all altcoins do is divert capital into their illiquid ecosystems, capital that would have otherwise flown into bitcoin.

During the worst of times, these leveraged Ponzis go bust, and since altcoins have tradable pairs with bitcoin and are considered in the same “asset class” as bitcoin, capital flows out of the entire sector. Since new investors don’t know how to differentiate between bitcoin and altcoins, when they see bad news like altcoin scams go belly up, it’s seen as just cause to cut your losses on everything.

In addition, these altcoin promoters and scammers might still be sitting on bitcoin or altcoins they wish to cash out, and they all head for the door simultaneously.

Advantages and disadvantages of fire sales

The primary advantage of a fire sale for a bitcoin investor is the ability to scoop up satoshis at a discount. If you’ve built up conviction in the asset and are confident in the long-term health of the bitcoin network despite the drop in price and recent sell-off, then you welcome fire sales.

Acquiring bitcoin during times of distress not only helps settle the market’s fears as they see buyers at a certain price range jumping in, but it can be a great time to buy bitcoin with the potential of realising profits in the future.

Fire sales are great opportunities for certain investors to average down their cost basis. If you were purchasing most of your bitcoin at a certain price and you can get a 50% discount now, you’re paying half the price to acquire the same amount of bitcoin you previously had. When you average down your bitcoin purchase, it also means that you require bitcoin to hit a lower price point for you to be in the black with your total stack.

Fire sales might seem like the world is on fire, but it’s a natural part of the redistribution of bitcoin. Those who don’t value their bitcoin and take on risk, those with bad business models, and those with no business being in the bitcoin ecosystem and scams eventually see bitcoin stripped from their hands and moved to those who value bitcoin and store it correctly.

Fire sales reward those who live within their means and acquire bitcoin systematically and periodically for the long term. In the end, fire sales are temporary, but fiat miners are permanent, and they will continue to dollar cost average and catch the falling knife whenever there is market distress. Fiat miners don’t need the bitcoin now; they are actively looking to save and increase their savings; their prudence is what props up the market, and they are the bailout.

Since there is no central actor to bail bad actors out or set a floor price, fire sales can seem brutal, but that is the bitcoin market at work, healing itself after ridding the weakest hands from the ecosystem.

How do you acquire your bitcoin?

Where do you check the price of bitcoin? Have you been able to gobble up sats when the price crashed? How do you source the cheapest bitcoin? Do you buy bitcoin on an exchange? Do you smash buy or use limit orders?