Why Is Bitcoin More Expensive On P2P Exchanges?

Home » Articles » Why Is Bitcoin More Expensive On P2P Exchanges? 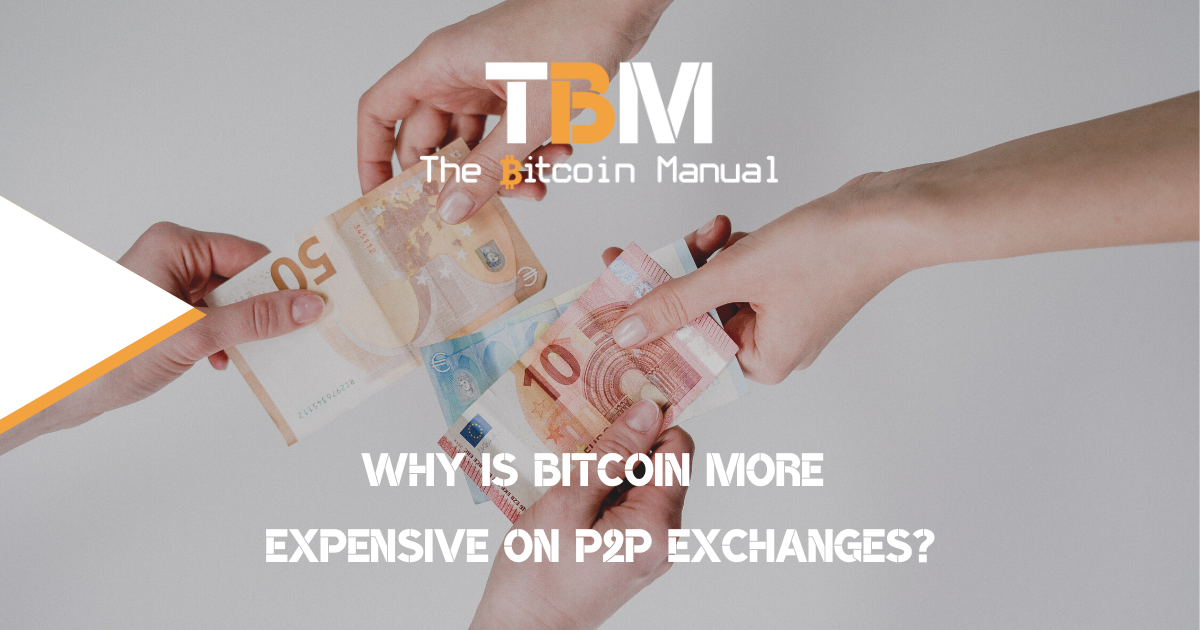 Today millions of dollars worth of bitcoin are bought and sold on markets worldwide; in the last ten years, we’ve seen massive leaps forward in the efficiency of secondary fiat to bitcoin markets and the ability to clear transactions between bitcoin and any fiat currency. Despite the improvement in access to capital markets, these large centralised exchanges rely on the banking system. If you, as an individual, do not have banking services or the right to banking services, you are officially locked out of these markets.

Limited or no access to banking services is not an issue relegated to the third world but one that affects large portions of the population.

Considering the world’s premier economy, the US, if we look at banking rates, according to the Federal Reserve, approximately 25% of American adults are underbanked or unbanked. While according to the World Bank, 1.4 billion adults remain unbanked worldwide, which is roughly one in four adults living without access to any formal banking services.

The fiat system has not only failed those who are unbanked, but even those who are banked; today, very few people are seeing a positive return or retained purchasing power parity on their savings. So apart from facilitating transactions, banks do not offer consumers much value. As a result, banks have had to provide financial services that take on more risk and offer it to clients, or clients would approach investment firms themselves to try and maintain their savings.

Considering the complexity of today’s banking and financial system, it’s no wonder the penetration of their services has stagnated, and a large portion of the global population remains unbanked. Asking people to prove identities, fill in forms, visit branches, access certain ATMs and pay points and charging them for each interaction is hardly an attractive proposition.

So your only other choice would be to save and operate in cash, which has its own issues. You could be subject to theft, attack, currency debasement or, in the case of India forcing cash holders to convert to a new form of cash or lose out on that purchasing power claims the old cash represented.

Moving from cash to cryptography

In bitcoin, however, we now have money that needs no proof of identity, paperwork or reliance on centralised infrastructure where transactions are permissioned and could be rejected or account banned.

Creating a bitcoin wallet is fairly straightforward and costs little to nothing, should you have a smartphone or laptop with an internet connection. The real issue is acquiring bitcoin; this is where the bottlenecks emerge. If you’re not mining bitcoin, you’re likely forced to use some regulated exchange, one that requires you to have banking services, which is a non-starter for the unbanked.

People holding cash, or those who can acquire cash derivatives such as gift cards and vouchers, need a way easily move between bitcoin and fiat currencies; this is where P2P trading and decentralised markets come into play.

What Is P2P Trading?

Peer-to-peer (P2P) marketplaces and traditional bitcoin exchanges are both platforms that allow users to swap their bitcoin for a preferred currency or currency equivalent. The primary difference is with centralised exchanges; you deal with an intermediary that has created an order book to match buyers and sellers and provides market-making services to ensure you can clear an order without having to check with an individual seller.

P2P trading is two individuals trading bitcoin directly with each other without a middleman or third party. It’s beneficial to both parties as they get to select their preferred payment method and a price on which both parties agree. This type of trading is called over-the-counter (OTC) trading.

Because you can trade directly with another person in either OTC or P2P trading, you get more freedom in the transfer method. You need not provide your personal details or KYC or require banking services; as long as you can settle the trade, it’s all that matters.

Today a lot of peer-to-peer trades are settled in various stablecoins, but they can be settled using

Even though P2P exchanges offer traders greater optionality when it comes to settling trades between fiat and bitcoin, it does carry a steep premium that is affected by some of the following issues.

The primary driver of cost in a P2P trade is that you’re not dealing with paper promises but with the final settlement. When you use a centralised exchange and perform trades, these are simply data entries created in their trading engine and should be “backed” by the exchange’s reserves. When you come to claim that fiat or bitcoin, the exchange will then check the balances based on the records and then settle up what they owe you after your request.

The entire time you were trading or buying on their platform, there were no bitcoin trading hands; it was only database entries.

P2P bitcoin trading platforms typically have lower liquidity than centralised exchanges. This means there may not always be someone available to match your trade order.

As a result, you may have to wait longer to find a buyer or seller, which can, in turn, impact the price of the currency you’re trying to buy or sell. To help entice a buy or sell, traders must put up attractive premiums to get users to take them up on their offers.

As with any trading platform, using P2P crypto trading platforms comes with certain risks. One of the main disadvantages is that the trading speeds can be pretty slow, as one party may put off the transaction midway.

This can lead to delays and frustrations when trying to buy or sell bitcoin and may impact your bottom line if the price of the currency moves in the meantime. In addition, traders may add a premium knowing there will be a lead time and that bitcoin could move against them in the trade during that lead time.

By adding on a premium, you provide yourself with an additional margin for price fluctuations while the trade is settled.

When a trader makes a P2P order, funds can be locked in an escrow waiting for the two parties to agree that the fiat side has cleared before the bitcoin is released. If there is a dispute on the transaction, that bitcoin could be locked up for a certain time period until the issues are resolved.

While that bitcoin is locked up, traders could have sold that same bitcoin to another trader, so by charging a premium, you take into account the risk or try to compensate for transactions that have failed in the past.

Depending on the fiat method of transfer, you might be subject to banking fees or transaction fees and these charges from the fiat side need to be factored into the trade.

Since P2P bitcoin trading platforms don’t have a central authority and work on a rating and review system, there’s a greater risk of scams. Users may create fake profiles or post false information to take advantage of other traders.

Traders with a reliable track record of settling peer-to-peer transactions are not willing to risk that for a few trades and know that the “trust” they’ve built on the platform allows them to command a higher fee.

As you know, this trader has performed several transactions in the past. They set the going rate, or you can go further out the risk curve to try and save a few percentage points by taking the orders with little or no track record.

Despite the extra costs involved, P2P markets play a vital role in the bitcoin ecosystem since it serves markets that don’t have formal exchange support. P2P exchanges also offer users pseudo-anonymity, fast transactions and 24/7 trading, which are the key selling points keeping P2P markets going despite all the competition.

If you’re willing to put up with the additional fees and slower clearing times, P2P markets are a great option for building a non-KYC stack of bitcoin that cannot be tied to your identity. While you might not be able to acquire large amounts of bitcoin on P2P exchanges, you can regularly acquire smaller amounts that could be worth a hefty sum in the future.

Paying between 10 – 30% above market might seem like a steep offer. Still, if you’re living in a country that is hostile to bitcoin or don’t have other options while facing rapid currency debasement, it is worth the additional fees to acquire the hardest money on the planet.

Are you using non-KYC bitcoin exchanges? Which app is your favourite? Do you have one you’d like us to cover? Let us know in the comments down below.