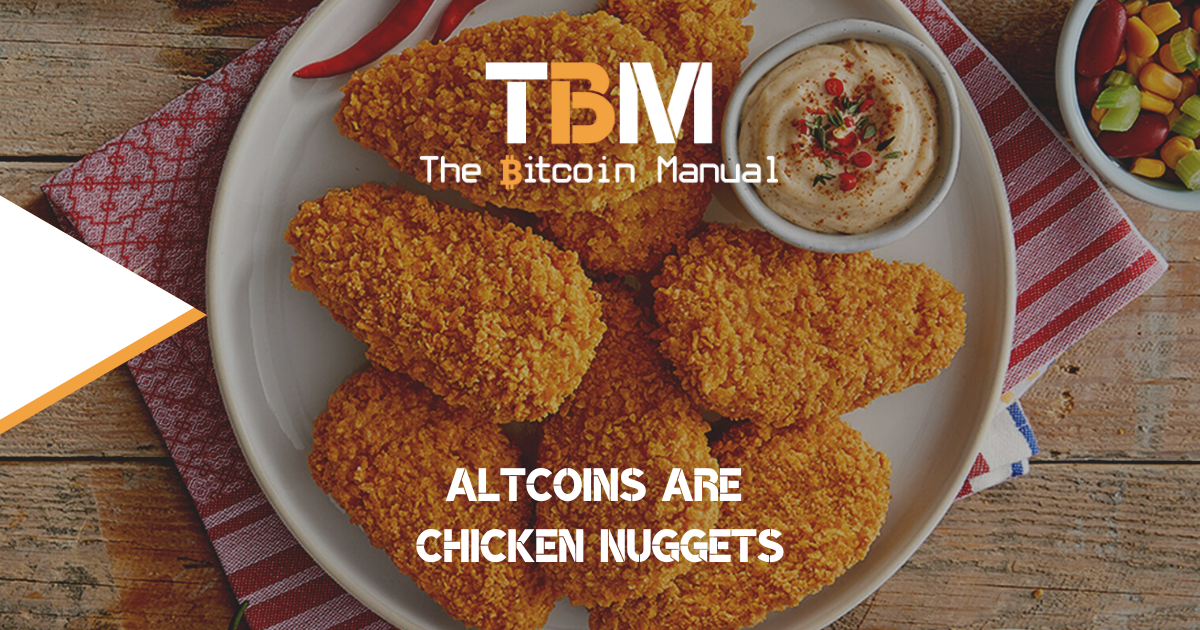 When you join the Bitcoin space, there’s a certain pressure to hide your past regarding your “curiosity” around shitcoins, but let’s be honest, it was all about greed. Many of us have shitcoined oops, I mean, acquired a basket of crypto assets lol, goodness, these marketing terms make me cringe. Aside, did I care about how X ICO was going to put Uber on the blockchain?

No, all I cared about was getting rich. The pitch was simply an afterthought.

Many realised it was vapourware others were simply naive; I was a bit of both. I wanted to put a little fiat in and get a lot of fiat out in the shortest amount of time. Like a microwave meal, it isn’t all that nutritional, but it does the job in the fastest time possible.

That’s essentially the game we play and to pretend you care about the decentralisation of insert niche industry seems like a running joke these days.

As is the case with altcoins, I got rekt, and I learned my lesson the hard way. I am no saint, peaching about the properties of Bitcoin as if I’ve never walked the path of an altcoiner.

I know the track and mental gymnastics required to walk it all too well.

It’s not Bitcoin, but it’s also not, NOT Bitcoin.

Many proponents of altcoins claim that their coin isn’t Bitcoin; it doesn’t do the same thing Bitcoin does; it doesn’t solve the problems Bitcoin solves and vice versa. Yes, this is true, but a lot of the marketing and hype is about it not being Bitcoin but also being like Bitcoin, let’s be honest.

I am not saying they don’t deserve to exist; I mean the Zune existed, didn’t it? The iPod did too, and while the iPod beat the Zune by a landslide, the entire space became obsolete eventually. Now you use your phone as your music player of choice. Having a music player was an excellent feature that people wanted, but it ultimately got absorbed into the device with the most robust network effect, the smartphone.

That’s how I see this all ending up; any cool ideas that come out of the altcoin market can be ported to Bitcoin. If it works on a sound money system, it passes the stress test and will be accepted as a viable product by the market.

But back to my analogy about chicken nuggets.

We all know what chicken nuggets are, right? A guilty treat of what we assume is chicken with breading and then fried or baked. Now there’s nothing wrong with chicken nuggets. If you make them yourself, cut up the chicken breasts and verify what’s in it, by all means.

However, the nugget you are putting in your mouth as an easy way to satisfy your carb cravings is anything but chicken.

It’s chicken in name only.

The chicken nugget is a food product consisting of a small piece of deboned chicken meat that is breaded or battered, then deep-fried or baked. The chicken nugget was invented in the 1950s and became a trendy fast-food restaurant item, as well as widely sold frozen for home use.

People loved it, and companies capitalised.

Researchers in one study examined a randomly selected chicken nugget from two different unidentified chains. The first nugget was only around 50% muscle tissue. The remainder was primarily fat, with some blood vessels and nerves in the mix. The second nugget was about 40% muscle tissue, with the rest being fat, plus some bone pieces and connective tissue.

I don’t think many of us can argue that this does not sound nutritious and does not seem suitable for your health in the long term. Sure it might quell your hunger pains for a day, but this type of food comes with health consequences.

It’s eating for eating sake and not eating to sustain yourself properly.

Altcoins are the chicken nugget of money.

I couldn’t help but recognise the striking similarities to chicken nuggets and my time messing about with altcoins. It wasn’t about saving or investing. It was investing for investing sake. It wasn’t to nurture my savings for the long term; it was to make me feel good in the short term. The price pumps and the promise of gains are the same sugar high you get from eating a processed chicken nugget.

It performs the function, yes, but is there any sustenance to it the project? Is it improving a fundamental market failure and needing to exist? Most of them, I do not think so.

Did I run a node and verify every coin I invested in? No, could I in many cases? No. Just like you cannot verify what is in the chicken nugget you buy in the store versus the one you make yourself in the kitchen with proof of work.

Just like we can loosely define the chicken nugget as chicken or even as food because it doesn’t taste too bad, and you can put it in your mouth, we loosely define altcoins as money or investments when they are gambles.

Altcoin projects extract some aspects from Bitcoin, throw in a token, throw in several copies of a blockchain, throw in a consensus mechanism. However, the actual nourishing parts of it? No, we don’t need it, we can cover it in bread crumbs and some salt (the marketing) to make it palatable for the consumer, and it should function the same.

Should chicken nuggets be banned or regulated?

Do I think that altcoins and chicken nuggets have the right to exist? Sure, people should be allowed to do what they want with their bodies and money. I have no say in that; people should be free to make their own choices, good or bad.

All I am saying is to realise what you are putting in your body or putting your money in and if you’re still okay with the long term effects of it, by all means.

PrevPreviousThe Relationship Between Bitcoin & Time
NextWhy Is Bitcoin So Volatile?Next