Why Is Bitcoin So Volatile?

Home » Articles » Why Is Bitcoin So Volatile? 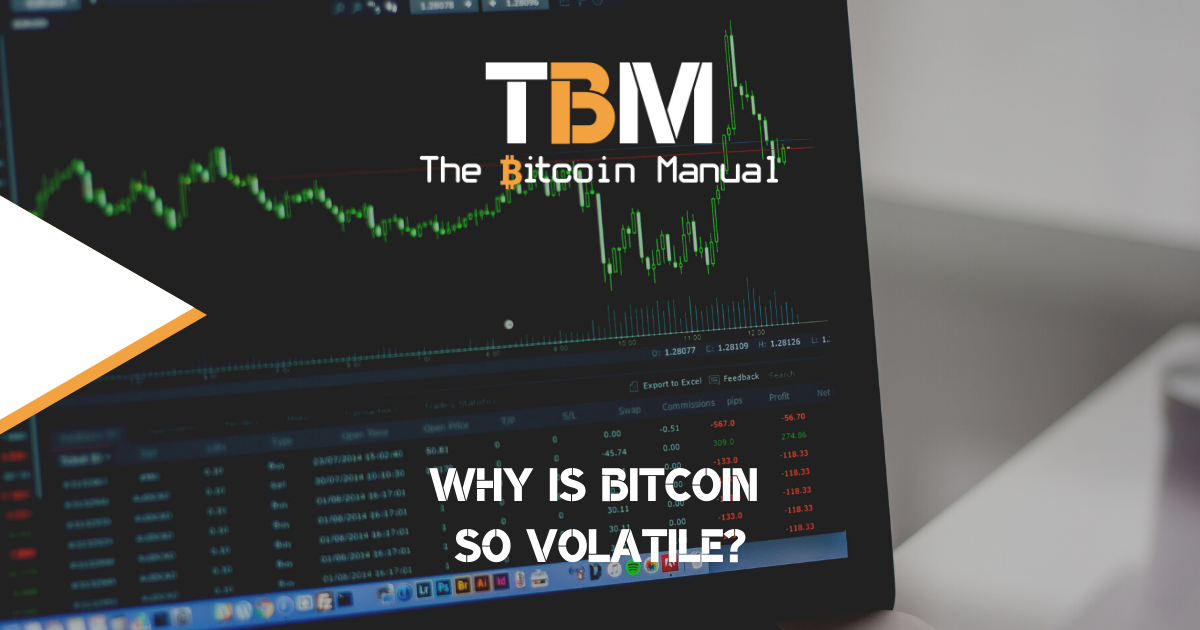 I always say if you’re going to start to invest in Bitcoin this early, and yes, even in 2021, I think we’re early. You should be asking a lot of questions. That natural scepticism you have about Bitcoin, don’t push it to the side, use it, question everything about it. Put it to the test, and if it passes your tests, you can consider acquiring some of it for your portfolio.

Bitcoin is NOT a get rich quick scheme, despite the way it moves. To the first time viewer of the price chart, all you see is noise, and it can be tough to figure out where this thing is going.

The price movements tend to put a lot of nocoiners and normies from investing, but the volatility is the price you pay for investing in an emerging asset class that no one knows how to value correctly yet.

One question I get asked a lot is why Bitcoin is so damn volatile? The price is all over the place; how can I invest in something that can move 20,30,50, 70% in the space of a day?

The primary reason is that Bitcoin is liquid, it’s a bearer asset with no third-party risk, so there’s no obligation, no lock-up, no restrictions on when you can buy and sell. It’s an open market that trades 24/7 all year around.

Think about it, imagine having a market that never closes; you can walk in at any time and negotiate with millions of buyers and sellers, all with different amounts of Bitcoin willing to sell at a specific price. Like any market, the price advertised isn’t the price you always pay; there is room to negotiate based on the supply available and the amount you want to buy or sell.

Now imagine this market, but instead of trading Bitcoin for, say, US dollars, Bitcoin has trading pairs for every currency on the planet. There is a USD/BTC market, so there is a EUR/BTC, GBP/BTC and many more. People are all looking for the best deal when buying and selling in their various countries currencies and when you couple all this together, it creates daily fluctuations in the price.

Like any asset class, there are people with far more of it than others.

Own a considerable amount of the coins versus the average Bitcoin user. If these large holders decide to take profits, they can easily push the price down as the market cannot absorb their coins.

Once sold, Bitcoin can be notoriously hard to re-acquire, and as new holders come on board not willing to sell for less than they bought, this fight for the initial distribution of the coins will see prices move around.

Bitcoin has no speed breaks.

Unlike traditional markets where institutions, central banks and governments can step in as a buyer of last resort, Bitcoin doesn’t have a non-economic actor that has the mandate to provide a floor for crashes.

When Bitcoin corrects, it’s up to the market to try and absorb that supply on the various exchanges. If coins being sold exceed the daily volume of buying, the price will drop. Adversely if the supply hitting the market is less than the daily volume, the price increases as fewer sellers and those sellers are only willing to let go of their Bitcoin at a considerable premium.

The Bitcoin inflation rate remains static at 1.81% per year, around 900 coins per day. New coins hitting the market each day fall into successful miners wallets; depending on how well capitalised the miner is, they may need to sell a larger or smaller amount of their Bitocin allocation to fund their operations.

If the number of new coins going on to the market exceeds the amount people are willing to buy, we would see price dips. Alternatively, if we see fewer new coins on the market, that means fewer coins to buy, and sellers become stingy on how much they are willing to let go.

As I mentioned earlier, different markets have different amounts of Bitcoin and demands in it. If let’s say, there’s a higher demand for Bitcoin in one country that exceeds what’s in that market, then this spills over into other markets.

Let’s say there is firm news or evidence of inflation in an African country; if consumers flock to buying BTC up the local supply, market makers will move to other markets to try and secure Bitcoin to provide for this demand.

Additionally, every four years or so, the Bitcoin inflation rate gets cut in half. As I mentioned, it’s currently at 900 per day; after the next halving, it will be 450. Simple math dictates that if the buying volume remains the same, but the daily supply is halved, prices should increase in a dramatic fashion.

Bitcoin is still in its formative stages, and as many people purchase the coins to get rich quick, they have a low time preference or very little conviction in holding the asset. Certain bad press articles can result in see capital flow out of Bitcoin and into other assets.

Bitcoin and the legal system.

As is the case with the media, change the way people view Bitcoin on any given away and reevaluate their exposure to the asset class, so do legal and political systems. We’ve seen countries act aggressively towards Bitcoin in the form of China, Turkey, Nigeria, who have moved to ban it.

While other countries like El Salvador represent the opposite side of the coin. Making Bitcoin legal tender and launching national mining operations.

Bitcoin’s volatility may seem like a deterrent for the average investor, but for those looking to speculate, it is an attractive market to trade in for short term profits. Believe it or not, Bitcoin’s price movements are not volatile enough for some traders and what they will do is borrow Bitcoin, which is known as leverage.

They will then use the borrowed Bitcoin to make even bigger bets in the market; when bets don’t go their way, and traders are liquidated, they are forced to close out positions. This can create a cascading effect pushing prices up or down depending on how many bets were placed on these secondary markets.

Volatility is the trade-off.

Bitcoin offers you surety in its supply, in its inflation and secures your value in the most powerful computing network in the world. It is the best performing asset of the last ten years, and if the trend continues will continue to be the best performing asset for the next decade. Getting the chance to invest in Bitcoin, an asset with no credit risk, no third party risk and no way to censor or stop, comes at a price.

The price of that is the volatility; now, while you may not stomach it, it won’t disappear anytime soon. If the other attributes I’ve mentioned above seem valuable to you and you can accept the volatility short term and overlook it for where the asset class can go long term, then perhaps you should consider Bitcoin more seriously.