The Shitcoin Colonisation of Africa 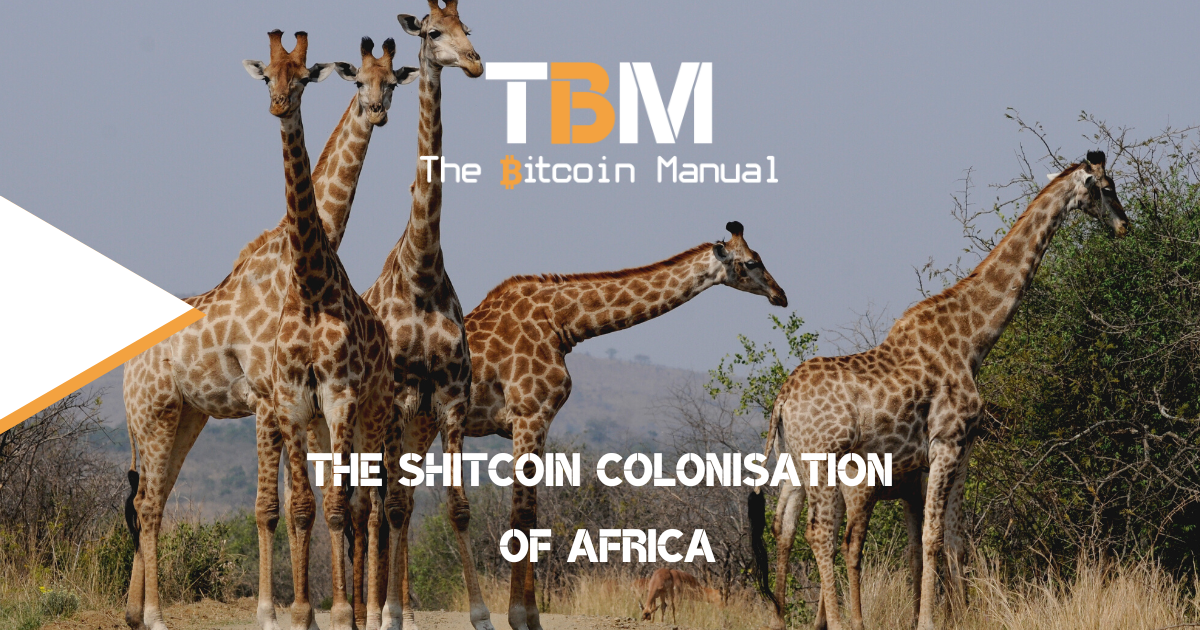 Every time I turn on the technology news or check social media, I am faced face-palming narrative that blockchain is going to help Africa leapfrog the legacy financial system and move the continent into a new era. The “blockchain revolution” is often compared to the fact that feature phones, Smartphones and Mobile networks blew up in Africa, and penetration is high per capita because we don’t have the legacy landline system as competition.

The idea is that since banks on the continent only serve those who meet certain criteria, a large portion of people is left unbanked; they trade in cash or cash-like instruments such as vouchers, data, airtime and eCash backed by certain providers in the region. In most cases, It’s a slapped-together regional system that isn’t interoperable with other systems. Therefore people create their own markets to try and trade through this broken system of value.

An example would be, I’ve gotten through an eWallet money transfer, I’ll buy an electricity voucher with that money, then sell it to someone who has cash that needs electricity, and so we manage to exchange value.

So the idea goes, if we can simply slap this user behaviour onto a blockchain and change the derivates to my token, Africa will prosper. My issue is THIS Is already a broken system; we’re only using it because it evolved out of what we could access; this isn’t ideal; it’s our only choice.

Ask any African if they want to hold their wealth in their local currency? You’ll probably be met with a smirk or a laugh, cash is trash, but it’s all we’ve got.

The problem with cash and cash derivatives is not only down to poor interoperability, but they are also tied to an even poorer monetary policy. If you’re not from an African country, could you even name an African currency? Probably not; they are insignificant on the world stage and useless for holding any value.

They are only a control mechanism to extract wealth from citizens to pay for obligations made to richer countries and keep the populous from understanding how this value transfer works. In African countries, it works well. Since very few people hold assets and transact in cash, you have a lot of collective purchasing power to steal and stealing is what they do on a grand scale.

You have a large contingent of over 1 billion people who you can drain as your personal piggy bank, pocket returns for yourself and kick up the rest to your overlords at the IMF, World Bank or whatever economic hitman you made deals with selling out your people.

Sad to see you go for Sango

When I saw the Central African Republic declare their intention to make bitcoin legal tender, I tried to curb my enthusiasm. I spoke of the obvious issues, but a part of me was hyper bullish, but I kept it in check because, as an African, we know anything our government’s promises shall remain just that.

As the weeks rolled on following the announcement, speculation online was at an all-time high, as well as interest in this African nation. As time went by, the trail went cold; we didn’t hear anything from their government nor see any movement or plans to turn the bill into something substantial on the ground.

The bitcoin announcement happened in May, and it took all of two months before we got the news that the country would not be using bitcoin but their own token Sango Coin, on the advice of certain entities who have a strong interest in the altcoin market.

So the promise of a country with very little going for it, using bitcoin as a springboard, is dead on arrival, this might be the first, but it won’t be the last. As with any altcoin, the country insiders will pocket their pre-mine, the founders and infrastructure providers will pocket their fees, and the citizens will be like any other bag holder, let with a worthless husk of a token.

Eth is for Ethiopia

This is not the first time an African country has been co-opted by shitcoin tactics; everyone’s top 10 favourite unit bias blockchain Cardano did it too. They earmarked Ethiopia as their test case, where Cardano was going to use its oh so helpful DEFI services and Identity storage solutions to help bring the African country into the 21st century.

The blockchain would provide the tools for the unbanked to access financial services and for the government to track the untracked.

Side note: The one thing we have going for us in Africa is relative anonymity, and you’re pitching to take that from us, fuck off!

The announcement got a lot of media coverage, did a little bit for token price at the time so founders could tap into a little extra exit liquidity, and the end product is non-existent. If you want to hear all about their so-called “Africa strategy”, Kal Kassa has the breakdown that will get you up to speed.

This is essentially a PR move, right from the IMF-style playbook, point to a problem in Africa, pretend to have a solution, get funding based on news, provide no solution, half-baked solution, but pocket the capital and leave someone else with the debt or problems.

We’ve seen this all before; it’s all too familiar.

We’re not trying to migrate from failing fiat to a failing shitcoin, we’ve been bag holders before, and it’s time we realise that shitcoins are the same mistake, only with a computer nerd pitching it to you instead of a banker.

Bitcoin gets blamed for everything

So the obvious choice would naturally be bitcoin in Africa, right? Not exactly; bitcoin is available with plenty a shitcoin casino offering up the sale along with a collection of cheaper unit bias crack pipes for you to get yourself well and truly wrecked on.

These casinos rely on misinformation, poor judgement, lack of education, and greed and allow a certain narrative to fester. A narrative that people consider bitcoin a generic product, and you can get the cheaper off-brand products that work in tandem with bitcoin.

They offer interest accounts; they offer arbitrage accounts, all to encourage you to keep your funds locked with them, so they can exploit them for their own gain. People don’t know how to self custody and when you don’t self custody of anything you own in bitcoin, it is pretty much meaningless.

To top that off, South Africa has been two of the largest bitcoin affinity scam ponzis that have blown up in recent years Mirror Trading International and Africrypt. These fly-by-night operations try to leverage bitcoin’s NGU technology and claim they can multiply it if you leave your bitcoin with them. Neither of these operations was actively trading, and when it came time to honour redemptions, both up and disappeared.

They are the two most prominent examples, but there are smaller operations afoot all the time; none of this has to do with bitcoin; they’re just leveraging the brand to try and solicit funds from victims. These people will have to learn the hard way, as many do worldwide.

You cannot enjoy the properties of bitcoin and enforce the rules if you don’t hold your keys.

Move to equity if you want equality

People on the African continent don’t need blockchain; they don’t need a token, they don’t need NFTs, and they don’t need DAOs or DEFI. We need a game where equity can be acquired and cannot be diluted. That’s it; that’s the innovation we need; once we have that, the rest will follow.

Bitcoin is where we have to draw the orange line.

Pay me in bitcoin or jog on!

You don’t understand; I ain’t scared of you mother fuckers

Now I could keep my mouth shut, I could not share my opinions, I could go apply to some casino and promote a product I can profit from, but others can’t, but I won’t. If anyone were to do a background check on me before hiring me, they could find this blog and my series of posts and would not take too kindly to my opinions.

Some might say I am cutting off my nose to spite my face, I am burning bridges, but why would I want to keep a bridge open to a destination I don’t want to go to in the first place. I don’t see the point in throwing others under the bus for my chance at getting closer to a certain money printer/altcoin creators inflation. I don’t want to live in a world like that, nor do I want to contribute to it.

I might be cutting off opportunity, but it’s worth it if I push out “signal”.

We have bitcoin, and the ground is set; why are you all so scared to play by one set of rules you can’t control? Does it feel weird to you? Why don’t you want to play a game of bitcoin? Are you scared it will expose you for the parasite you are?

To me, the promise of bitcoin is worth fighting for; I am tired of playing a rigged game. I am happy to provide proof of work to prosper in this game, as long as what I’ve earned, I get to keep and preserve, and that to me is dying to see it become a reality.

The worst case is bitcoin fails, and I experience soul-crushing poverty, and I would have only arrived at the destination I would have, should I have played the fiat game. So while there is still hope that it does work, I will keep calling out scammers.

You don’t understand; I ain’t scared of you, mother fuckers!

South African bitcoin pleb falling down the rabbit hole and willing to share every bump, scratch and knock along the way
View more articles from this author
PrevPreviousBitcoin Is Ubuntu
NextWhy Do People Hate Bitcoin?Next