What Is A Lightning Routing Node?

Home » Articles » What Is A Lightning Routing Node? 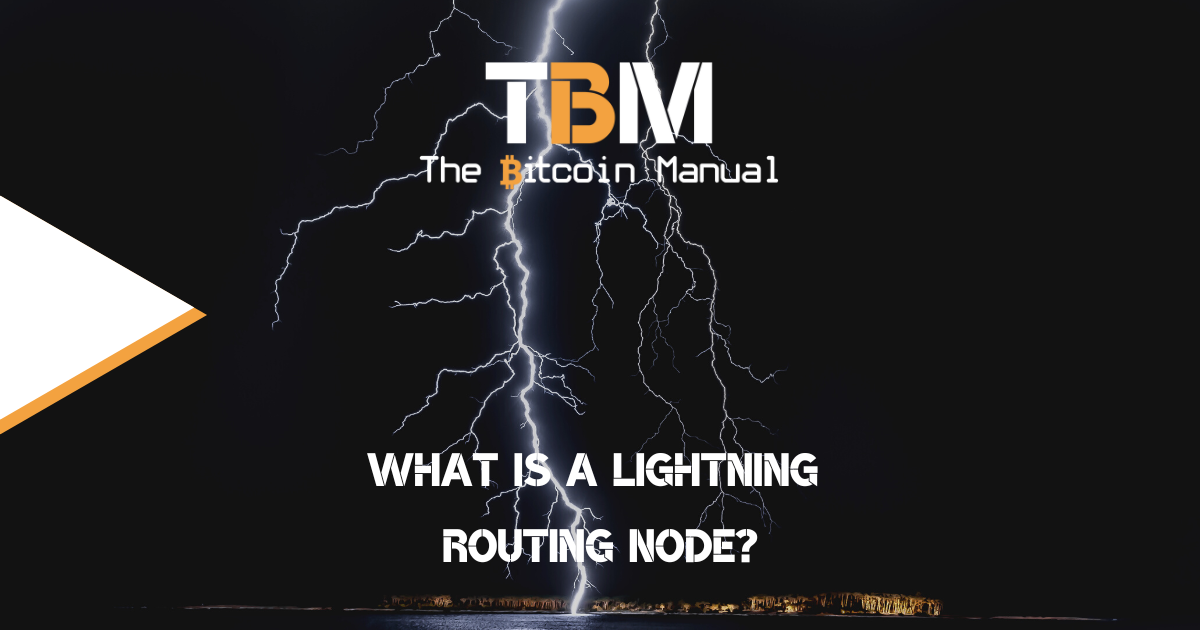 The Lightning Network is the fastest-growing layer two solution for the Bitcoin network, which allows for off-chain transaction settlement. The Lightning Network is an open and permissionless system in which anyone can participate as long as you run the software and have bitcoin to back up your channels. Today Lightning channels are run by businesses and individuals alike, all for different purposes.

Some individuals choose to establish Lightning channels so they can simply pay different users or service providers, while others are actively looking to use their bitcoin to route payments through the network and net a fee for their troubles.

Since more services and exchanges are integrating Lightning, the liquidity available for routing payments is growing, and more applications and ways for users to interact with it are being developed each year. The more the network grows, the more need for liquidity and channels to allow payments to hop between the network and find the best routes possible.

By providing liquidity and linking up with the busiest channels, a routing node can help drive down the costs of routing payments, reduce hops needed to complete payments and ensure that payment failures aren’t a common user experience.

Putting your liquidity to work

When you opt to run a routing node, you’re signalling to the network. I am willing to lock up some of my bitcoin to allow other channels to pay one another using this balance. If a lightning invoice is paid and, in that process, funds are moved through your node, you get to take a fee for that service, a fee that you determine based on market conditions.

Operating a routing node does not require a highly specialised set of skills. You do not need to be a programmer, to understand the details of cryptography or complex financial markets. There are plenty of tools (like Faraday) and tutorials, and the UI has drastically improved to encourage routing node running.

However, running a profitable or well-oiled Lightning node is a different prospect altogether; this is not some set-it-and-forget-it operation and will require plenty of close attention. You will need to manage your channels, ensure capacity is rebalanced, and that you’re connecting to other nodes that offer you viable traffic.

Running a Lightning Node has its nuances but can be profitable and effective if done right.

Objectives of a routing node

The objective of a Lightning node for the network is to have more peers join the network, lock up bitcoin and create interconnections between nodes so payments can find multiple paths for routing. These routing nodes are effectively scouring the Lightning Network where traffic is high and offering a path through their node and collecting a fee for it.

Criteria of a good routing node

A good routing node needs to fulfil a wide range of requirements.

A routing node needs to be available at all times; this means your node needs to be up and running 24/hours a day, waiting for payment requests. Your channels must also maintain inbound and outbound capacity at all times, or you could lose out on possible transactions. If you’re looking to build more channels and want to let others open channels with you, you will also need to allow for incoming connections.

To ensure reliable routing, the node needs to have enough channels to other good routing nodes in the network. Private channels are not announced to the network and, therefore, not counted. Private channels can present additional opportunities for routing when others open channels with them, creating what is referred to as a Gateway node.

Ideally, all of these channels are available and not disabled. Avoid peering publicly with non-routing nodes.

Channels need to be well-capitalised with bitcoin to route payments efficiently. That means they need to have sufficient capacity, with enough incoming and outgoing liquidity.

Each channel must maintain some buffer capital, meaning a minimum balance of outgoing and incoming capacity. This is to ensure the channel can route at all times, as other nodes may no longer choose you as a hop if they experience routing failures due to low buffer capital.

How do lightning nodes make money?

Lightning nodes actively search out the most efficient method for processing transactions; that’s the goal of the network and the ideal you need to cater to as a node runner. To be profitable, you’ll need to set your own node’s charge low enough that you’re considered affordable by the network but high enough that your capital actually nets a return that is worthwhile.

Now there is no set figure, and the network’s need for liquidity and their willingness to pay changes all the time, so you’ll need to remain on top of those price movements. You will have to assess fees, traffic flow, which channels to open and close, and rebalancing. You need to look at how traffic moves and how much it costs to move the traffic. That way, you can find the best places to plug in your liquidity.

Chasing the traffic sounds simple, but you must consider adjusting your channels. Since you need the traffic to flow in both directions, or your channels become unbalanced. You will never have a perfectly balanced channel, but you do want one that doesn’t require you to constantly seek out or purchase rebalancing liquidity as it adds to cost and maintenance fees.

Sunk costs of a lightning node

To run a Lightning node requires you to put up capital for some upfront costs; you’ll need to invest in the following:

These costs should be factored into your accounting, and from there, you can decide if it’s worth running a routing node or not.

Risks of running a routing node

Running a Routing Node is not a risk-free endeavour; like any business opportunity, it will carry risk. While we’ve already gone over the possibilities of running an unprofitable node and the costs involved, there are also cases where your node could be exposed and cost you more than a simple on-chain fee.

If you are new to Lightning, it would be best to keep your channels small for now and get comfortable with the system, its shortcomings and its nuances. Once you’ve found profitable channels at a smaller scale, you can begin to deploy larger amounts of bitcoin to our node for wumbo channels.

Even if running a node is a profitable venture, it shouldn’t be a place where you store all your bitcoin; since that capital is actively at work, it isn’t as safe as bitcoin simply sitting in cold storage.

Hotkeys are a risk

Since a routing node must always be online, Lightning Nodes use a ‘hot wallet’. This means that your private keys are on a device that device connected to the Internet 24/7.

Physical damage to the node is also a real risk of losing funds. This can be a house fire, a theft, or a hardware failure. If not properly backed up beforehand, your satoshis sitting in those Lightning channels could be lost if there isn’t a recoverable backup or if you’ve lost the keys to that wallet.

While relatively unlikely at this stage of the Lightning Networks maturity, bugs and exploits can still occur in any software. If you are planning to run a routing node or already have one up, it’s important to ensure that you’re using reliable software and don’t always update to the new version but wait for confirmation that it’s safe to update.

If you’re running a routing node, it’s best practice to you use a second computer to run your node and connect it to a second computer as an interface. Programs such as RTL, Thunderhub, and LiT make it extremely easy to retrieve node information such as channel balances, routing fees, and channel fees from your node and manage it remotely.

Should an unauthorised person be able to take control of your computer, whether via a virus or because they have physical access to the computer, your bitcoins could be at risk.

If you want to learn more about Lightning routing nodes and dive down the rabbit hole, we recommend checking out the following resources.

Have you been using Lightning to make micro-payments? Stream sats or engage with apps? Which app is your favourite? Do you run a Lightning node? Have you tried all the forms of Lightning payments? Which one do you prefer? Let us know in the comments down below.