The Bitcoin S2F Model Was A Marketing Gimmick

Home » Articles » The Bitcoin S2F Model Was A Marketing Gimmick 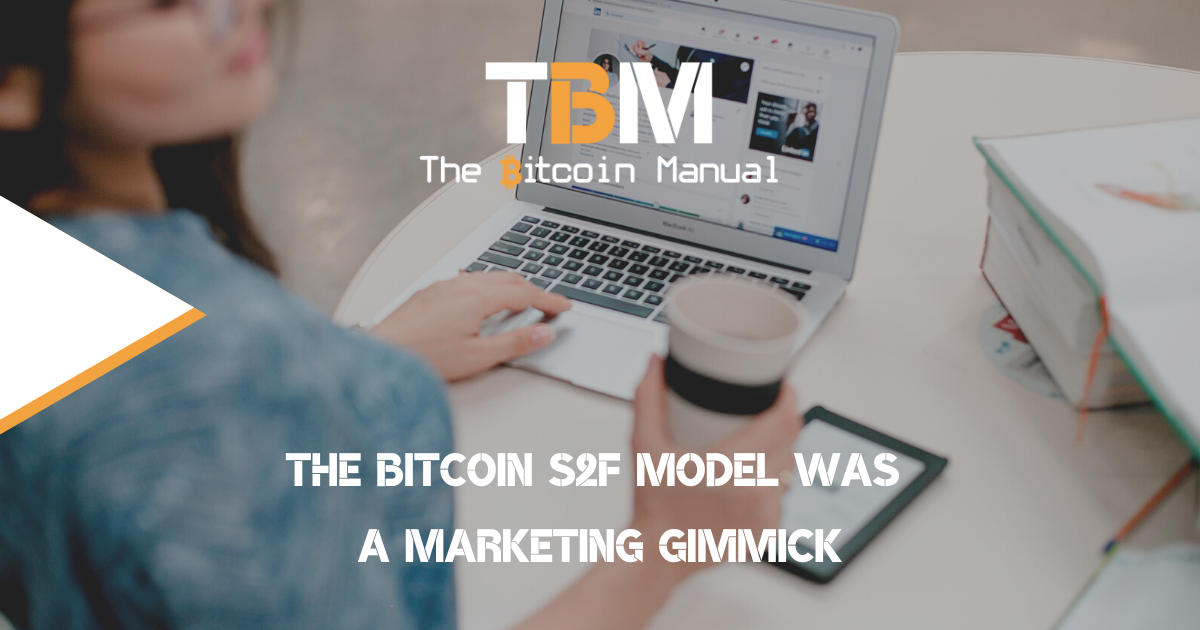 If you got into bitcoin towards the end of 2018 and the beginning of 2019, started to listen to some of the regular podcasts emerging back then and followed the big Twitter accounts that preach bitcoin, you must have come across a mention of the stock to flow or S2F model.

Created by an anonymous Twitter user who goes by the handle @100trillionUSD, this model has been reshared thousands of times and pointed to as the reason why everyone who doesn’t buy bitcoin now and long x10 can HFSP. The moon boys loved it, the podcasters loved it, moderates entertained it, and the toxic maximalist questioned it to no end.

Regardless of what part of the spectrum you’re on, the model was doing what it was meant to do, drive engagement, conversation, and most of all, views.

During any bitcoin bull cycle, the “educational” space goes a bit off the wack and turns into a cheer fest as you have to compete with all the noise. As is the case, price brings curious noobs looking to make their fortune spending a fiver on a long shot. Many people who came into bitcoin as they were still very impressionable. They were looking for guidance, and when someone is telling you “bitcoin is going to the moon”, “laser ray till 100k”, and I have the model to prove it, you don’t want to question it.

You want to believe it, you want to cheerlead it, and many placed their bets based on its predictions.

Yes, Plan B added his disclaimer all models are wrong to avoid critique. As does every podcaster who provides financial advice and then cleans up his or her tracks with a dirty sock with the “this is not financial advice” disclaimer. But we all know people, especially those without a cycle of experience, are going to take the word on the internet as gospel and invest accordingly.

The timing was on point

I think the fact that he remained as an anon resonated with people coming in during the 2019 cycle. One of the first things you learn about bitcoin is that its founder Satoshi Nakamoto was an anonymous creator, and bitcoin is legit, so I think some people simply assumed that because Plan B was anonymous, we should automatically give him some benefit of the doubt.

The thing is with satoshis creation, you could run the software and verify it for yourself; with the S2F model, you can’t, especially when he started soft forking changes into it every few months and then pulled off a hard fork with the S2FX model.

We can all become “bulltards”

I am not here to hate on Plan B and his work; he sure did bring a lot of attention to bitcoin, be it for the wrong reasons, but attention nonetheless. I think that it provides us with a valuable lesson that some have forgotten and others did not learn yet.

The lesson of “don’t trust, verify”.

A lot of people trusted this model. Many stated their reputations on it, supporting the model and now they’re left with egg on their faces. The failure of the model after being held up as the shining example of bitcoin’s potential this cycle is now used as a gambit to embarrass bitcoiners, and Vitalik wasted no time in rubbing it in with his review on it.

A take that is richly deserved, bitcoiners like to dish it out, and now it’s time to take your faux pas and live with it.

I am no financial genius, but listening to the many podcasts, I only had one question. How do you account for the demand side of the equation? Sure the stock and insurance are known, but how do you know that demand would continue to outstrip supply constantly to the upside within this certain time frame?

It was the question that bugged me. I didn’t get it. Maybe I am the dumb one here. I mean, look at all the smart people entertaining the model, maybe I need to learn more, so I thought. I will openly admit that it did make me feel slightly bullish, just not to the point where I would share it with others.

I, too, was part of the “bulltards” to an extent.

As the S2F model started to gain popularity, you’d see Plan B headline every single Thinkboi and CryptoChick Podcast. Search Plan B S2F model in any podcast app, and you’ll see what I mean, or visit his website; Plan B hosts all his interviews there too.

The Podcast circle jerk had found their cash cow for this cycle; you pull on Plan B to tell your audience they’re all going to be rich, and look at my chart proving why and boy, the listeners came rolling in.

Now podcasters can’t be held responsible for all the guests they interview, but I would have liked to see them pull him back in for questioning, review why it failed, and the learnings we can take from it.

Instead, it was swept under the rug, and people are distancing themselves from Plan B the moment he starts to take some heat, which I think is rather cowardly and shows the quality of certain people in the space.

Is it a slight funk, or is it debunked?

Now that bitcoin has retraced to above its previous cycle all-time high; it looks like support for the model is losing steam. Sure Plan B continues to adjust it and pins the failure to track on external factors like Lockdowns, supply chain issues, war and the Terra Luna blow-up, but how long will the excuses last?

Despite the failure being ignored by the proponents who used it as a way to grow their audience, increase their podcast downloads and get more followers during a bull run, there are those who refuse to let S2F shilling go silently into that good night.

If you want a great recap of the drama, here are some awesome summaries.

Now any idiot like myself can point to the model and say, hey, when 100k? And say that’s not right and move on, but there are those who have taken the time to go through the S2F and point out its shortcomings. If you want to read up on the failures of the stock-to-flow model, you can check out some of the following resources:

Hopium sells and can be monetised

The Plan B website, Brand and Twitter account has blown up over the last three years thanks to all the podcast appearances and media sites syndicating his model and his tweets in their articles and to his credit, Plan B has built up a whopping 1.8 million followers on Twitter with his peak growth coming in October of 2021 where he picked up a cool 417 000 followers in one month.

Having that level of growth and attention will eventually be monetised; it takes a strong person to say no to it. When you look at the number of money exchanges are willing to throw at influencers to send traffic their way, it’s pretty hard to resist, I would imagine.

Sure Plan B is not your traditional mouth open on thumbnail, shocking chart pattern; here is my discord group moon boy, but he sure does have some similarities.

As they say, You either die a hero or see yourself live long enough to start shilling.

What I think is happening now is anyone not impressionable enough to trade based on the model are leaving, and what he is doing now is creating an echo chamber of moon boys and girls who will follow his calls and trade accordingly.

So I wasn’t surprised to see the place where people go to get wrecked regularly and promoted by Dubai-based influencers is now Plan B’s “Favourite Exchange”.

We’re all learning as we go

I think the S2F model can now be put to bed, but it has taught us a valuable lesson regarding the narratives we choose to push in bitcoin. Yes, price is an easy talking point to get people involved, but the price is a low-time preference narrative, and that is not why bitcoin is a revolutionary technology.

What is the point of measuring bitcoin’s success through the lens of a failing measurement tool? Yes, we want more people coming into bitcoin, but we want them to come for the right reasons. If they don’t, they’ll leave for the next shiny trinket with price action.

Nobody knows if the bitcoin price will go up, down or in circles, the least of all bitcoiners. If they did, they wouldn’t be dollar cost averaging, now would they?

The S2F model debacle shows that we have a long way to go in terms of education and teaching people how, why and when to value bitcoin according to more than just the price it could be or should be or what you want it to be.

Chasing the price up is probably the first mistake many new traders make and thinking it’s a sure thing or that they’re too smart for the market and finding out they’re not by getting their accounts wrecked. If you are getting into bitcoin, learn some humility, learn not from one source but review opposing options, and remain sceptical, especially when it comes to suggestions on where to place the fruits of your labour.

Think about who benefits from the actions you take and where conflict could arise in the messaging people put out and the incentive. As you begin to question what you’re being fed, you’ll start to build the tools to detect things that don’t sound quite right and build your resolve against them; that’s how you become a better bitcoiner, through proof of work on yourself.

So what is your opinion on S2F? Did you place any bets according to the model? How did it work out for you? Let us know in the comments down below.

South African bitcoin pleb falling down the rabbit hole and willing to share every bump, scratch and knock along the way
View more articles from this author
PrevPreviousHow To Delete Your Vauld Account
NextSaving Isn’t Sexy, It Is NecessaryNext