Home » Articles » What Is The Bitcoin Kimchi Premium? 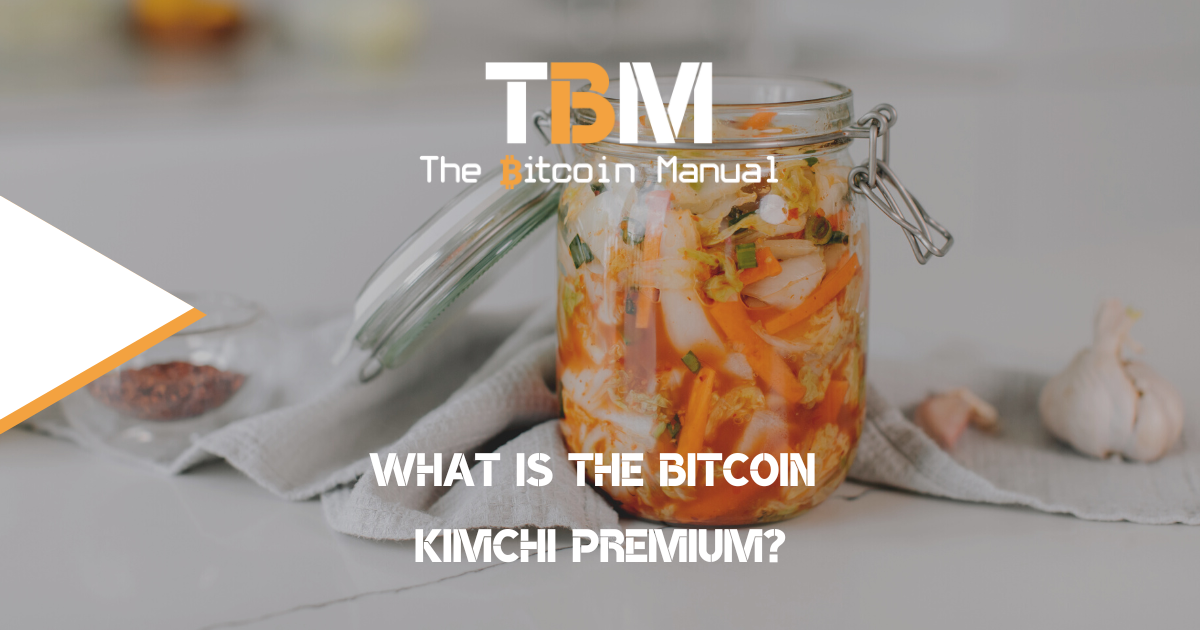 Bitcoin exists everywhere and nowhere at the same time; the distributed ledger and all the assets it manages are purely digital, so it has no borders, it has no restrictions. As long as you follow the consensus rules of the network, you can engage in transactions on the bitcoin network. It’s simple and elegant in its design, with a core focus on security and verifiability.

Bitcoin only requires you to run a full node and a wallet, and you can send and receive bitcoin; this setup can be as simple as running it all on your desktop computer or as complicated as you want it to be to improve your security or ease of access to the network.

While bitcoin offers the same barrier to entry for everyone, the ability to trade it for fiat has far more hurdles—markets for bitcoin to fiat range in size, depth, liquidity and accessibility. Depending on the country you’re living in or the currency you’re using, there might be more or fewer restrictions on your access to bitcoin.

If you’re not going to mine it, you have to purchase it from someone mining it or someone willing to sell it to you for a fee. You could purchase it from an individual or a company with the counterparty looking to net a healthy profit for the sale and cover any expenses like the mining fee it would take to send you the funds.

What is a premium?

Broadly speaking, in trading terms, a premium is a price paid for above and beyond some basic, intrinsic or current market value. The word “premium” is derived from the Latin praemium, which means “reward” or “prize”. “

At a premium” is thus meant to describe an asset as being priced higher than it is worth.

If you would like to experience a premium, I would encourage you to check out the price of bitcoin on your local exchange and then compare it to the price it trades on P2P exchanges. Even better, you could take advantage of it yourself by purchasing bitcoin in a KYC exchange for a lower price and then selling it to capture the P2P premium people are willing to pay you to retain their privacy.

This is one type of premium, the privacy premium. Still, another exists that has enough demand that even institutional traders look to take advantage of, and it’s known as the kimchi premium.

What is the kimchi premium?

The name “kimchi premium” refers to the fermented cabbage dish that is a staple in Korean cuisine.

South Korea is the third-biggest market in the world for bitcoin trade, behind Japan and the United States. A premium often exists in Japan, where those exchanges can be lumped in as a kimchi premium. Still, for the most part, it’s very much a South Korean phenomenon.

An example of the kimchi premium?

The “kimchi premium” first appeared or rather was discovered in early 2016, according to researchers at the University of Calgary. Between January 2016 and February 2018, it averaged 4.73% and reached its highest at 54.48% in January 2018.

As that demand continues to drive up bis, traders look to close that gap by purchasing bitcoin from around the world on cheaper venues and moving it to South Korean exchanges and selling it for a higher price.

The kimchi premium has also been compressed in recent years by the roll-out of stablecoins, which makes it easier for traders to get in and out of exchanges faster without the need to touch the local currency in South Korea and deal with that currency risk.

Why does kimchi premium exist?

Kimchi Premium is the result of a couple of interrelated factors.

First, the capital controls in South Korea restrict large amounts of money from going in and out of the country. This hinders the large-scale purchase and sale of cryptocurrencies such as bitcoin, keeping the supply sparse and prices at a premium.

Demand for an inelastic asset

Second, with the up-and-coming bitcoin “crypto” economy that South Korea is, buyers often outnumber sellers and the price of bitcoin within the country’s bubbling crypto sphere increases for a short duration.

The complexity of taking advantage of the kimchi premium also discourages investors from engaging in the practice. The investor will be required to open a new bank account for foreign exchange. If investors cannot capture the premium and move in and out of the exchanges fast enough or the premium doesn’t warrant how long capital might be locked up. Traders will ignore the premium until terms become more favourable; in most cases, the terms mean a larger premium.

Is the kimchi premium clean profit?

While it was usually assumed that the Kimchi premium was innocuous, caused by technical limitations of the Korean banking system and the popularity of bitcoin, a new investigation in the summer of 2022 suspects that a lot more of the demand for bitcoin stems from illegal activity with more than $3.4 billion of illegal foreign transactions in the country stemmed from “cryptocurrencies”.

If you’re reading with a regulated exchange in South Korea, it shouldn’t be a problem, as the assumption is all accounts are KYC and AML verified. But as we know, KYC isn’t a deterrent for criminal activity and is more of a surveillance tool for ordinary law-abiding citizens.

If you’re taking advantage of a trade like this, you might consider CoinJoining your funds once you pull it from the exchange. The last thing you’d want to deal with is your public addresses, and UTXOs flagged because of some Korean exchange trying to blame you for their poor due diligence on customer accounts.