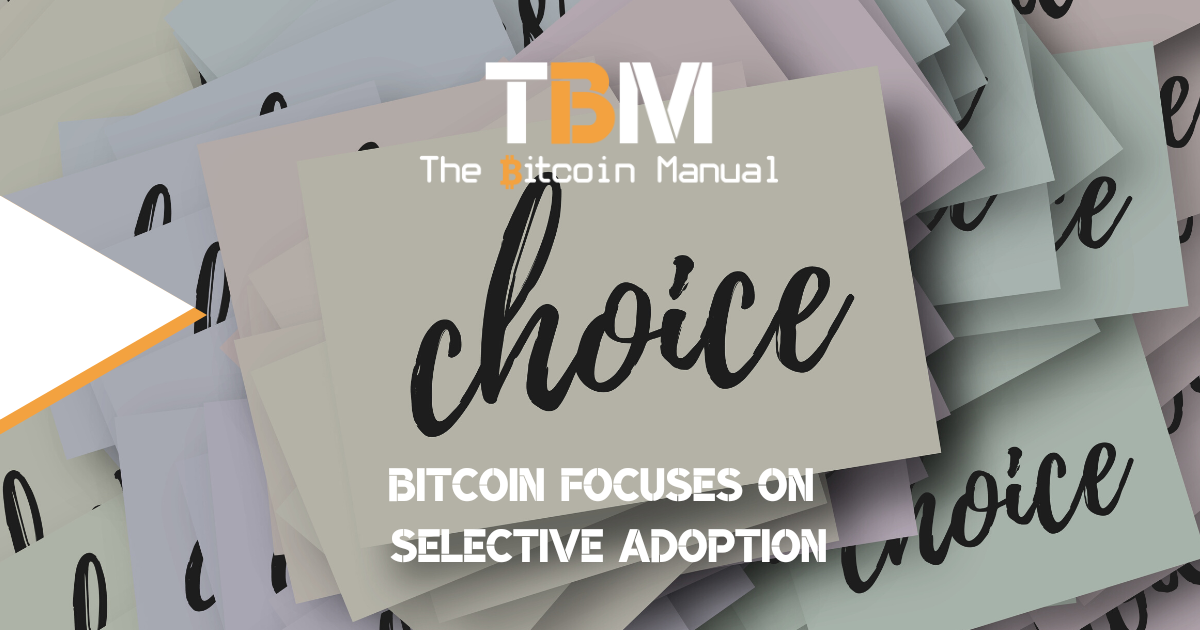 If you’ve spent any considerable time trying to orange pill the masses, you’ll realise what a waste of time and energy it is, and you’re better off focusing on other tasks. No one will receive a message if they don’t have the tools to decipher them; it will only prove to be white noise or static as they have no idea what frequency you’re broadcasting on.

No one is going to care about bitcoin if they think what they have works perfectly fine, so what’s the point of selling it to them? Trying to pitch an email to someone who owns a fax machine, has sunk a cost into it, and established a user behaviour and network is harder than pitching someone an email when all they’ve ever had is a handwritten letter.

Some will be able to recognise the improvement through their current life experience and realise the value and efficiency gains, others will not, and that’s okay. I can’t speak for every bitcoiner, but from my experience, orange pilling comes with a pretty low conversion rate, even if you’ve tried to qualify the person beforehand.

Someone might have some of the aspects of becoming a bitcoiner, but even then, the message might come through in fragments and cannot fully be reassembled by the person. This is the nature of bitcoin in its early stages, and this barrier cannot be ignored.

Anyone advocating for mass adoption of bitcoin is clearly overestimating the masses’ ability to reprogram their thinking on a dime. The masses don’t think for themselves, they acquire their decision-making from social consensus. If everyone thinks it’s cool, it is now cool; that’s all there is to it.

The masses don’t course correct based on evidence, trial and error and prior experience; they course correct based on how many times authoritative media outlets and figures repeat the same narrative. Their beliefs have nothing to do with reality or fundamentals, so why do bitcoiners think that people who live like this are going to “get bitcoin”?

And that’s okay; bitcoin doesn’t need mass adoption right now, nor could it handle mass adoption as we still figure out how to scale it while maintaining its decentralised nature. What bitcoin needs right now are those who can see

Bitcoin core and its ethos

Bitcoin core might refer to the software used to run a bitcoin full node and achieve consensus with the network, but we also have a bitcoin core in those that have chosen to join the “bitcoin religion”, the “bitcoin maximalists”, as many like to call us. The bitcoin core, in this instance, are the people who have chosen to store their value in bitcoin, feel it’s a network that they can build a business on, create software for, build hardware for or contribute to the decentralisation of the network.

The bitcoin core is a slowly growing stubborn minority of people who are not only developing the infrastructure around bitcoin, being the testers of products and services, providing feedback for entrepreneurs but also those shaping the culture around it.

Bitcoin is about accepting the fact that no human or central entity should have control over the money supply and issuance. It’s about getting rid of interventionism in money; it’s about putting a high-cost barrier to the production of money and setting a base for economic activity. Bitcoin is about humbling yourself and understanding that proof of work is key to abundance and prosperity.

If you don’t hold those values, you need not engage with the core bitcoin group; you can find other projects willing to tell you beautiful lies. You can back those projects with your time and economic value and try to best bitcoin; go ahead; we welcome the competition.

If you’ve heard about bitcoin and you have some bright idea on how to change it that isn’t within the consensus mechanism, you can either accept it or build something constructive on top of bitcoin. Alternatively, you can leave and start your own coin and test your idea in the market; once your project fails, you’ll be poorer for it and rightly so for making bad choices.

Bitcoin is very transparent; you know the rules, you know the monetary policy, and the code is open source. You choose to own the asset and broadcast it to the network. It’s a completely opt-in system, and no one will force you into it; only you can do that. So if the bitcoin rules don’t seem to resonate with you, don’t abide by them; feel free to go elsewhere.

Focusing on mass adoption is counterproductive

Ask anyone who has started a business; those that don’t quickly identify their target audience and feel that all people are their customers quickly die out. Their message, brand and value proposition becomes diluted as they try to target anyone and everyone.

If you don’t focus on your core demographic in business, you are going to fail.

If you want to experience “mass adoption”, I would encourage you to visit a shitcoin discord sever or telegram chat. It’s filled with people who have no idea what they are talking about, coming up with all sorts of ideas; let’s add pictures on our chain, let’s burn some coins, let’s up the staking rewards.

These chatrooms are a buzz with self-serving individuals all looking to try and get something for nothing by being close to the issuer of the currency. Once you see the frenzy of fickle users jumping from chatroom to chatroom, you’ll soon realise there is very little value in mass adoption

It’s all a lot of noise and even more distraction.

Noise that gets filtered into the protocol since these networks are mailable and subject to pressure to please the masses.

If you look at mass adoption in shitcoins, the vast majority of people in the space bring only one thing to the table, the ability to be bag holders for issuers of the token, that it. The incentive in cryptocurrency is to push to secure a large amount of people and appeal to the lowest common denominator.

Very few people with $1 million to invest and a brain to boot are going to put money into these projects if they didn’t lead the seed round and are on the side of those dumping. So the idea here is to fund as many people as possible willing to throw $100 to $1000 on a hope, and a prayer of x100 gain and secure that capital for yourself.

In shitcoin land, they talk about mass adoption while they enact mass slaughter of their user base.

Pushing for mass adoption is pushing for early dilution of bitcoin. If you do not have a strong core of people willing to enforce the rules at all costs, who knows how the protocol could have changed and, in my opinion, weakened and opened to attack? Who knows how shoddily the building of software and hardware would be built?

Dismissing the core in favour of growing the sheer user base is venture capital mentality, not the mentality needed to drive a revolution. You have to establish a stubborn minority that is unwavering, that create a culture that filters out any ideas or anyone who aims to harm bitcoin.

Having that stubborn and committed minority help perpetuate the ideas and culture of bitcoin and act as a method of qualifying those who will become early bitcoiners and thus benefit from bitcoins monetisation.

As value accrues to these people, they have more resources to back their ideas, and their view of the world and the masses will be forced to capitulate should they wish to access the sources held by bitcoin holders.

Bitcoin needs selective adoption, which will lead to mass adoption.

The masses don’t have an opinion; they regurgitate opinions and absorb opinions of others; without the selective adoption to form the opinion and culture congruent with bitcoin fundamentals, you have nothing for the masses to adopt.

You can give the masses perfect money, but if you don’t teach them how to value it, how to use it and why to use it, they won’t know any better. This is clearly evident in the way most people who have come into contact with bitcoin, treat it today.

They are tourists; they just want to experience the culture and benefits of during the good weather times and leave once they’ve had their fill of dopamine. Then on to the next dopamine rush, so why would you waste time and resources focusing on people like this?

I would rather have 300 spartan soldiers trained in combat and ready to fight than a horde of 10 000 strong made up of people who have peacetime professions.

Bitcoiners, WHAT IS YOUR PROFESSION?

Mass adoption is for those who seek approval and ask permission; bitcoin doesn’t care about any of that; it’s a tool, and people can choose to use it or not. You can choose not to use the tool or use inferior tools and make your life harder.

Ultimately the buck stops with you.

When a new technology is adopted, everyone benefits; to what degree they benefit is up to the individual. When agriculture was invented, we all benefited from producing more food. Still, those who put in the work risked the capital and built businesses on top of that technology benefited the most.

When commercial electricity was invented, we all benefited from cheaper access to energy. Still, it’s those who took the time, learned how it worked, risked capital and built a business on top of this new technological wave that benefited most.

So, why would bitcoin be any different?

The mass adoption of bitcoin will come with outsized rewards and benefits to those who selectively chose bitcoin long before the masses caught on.

South African bitcoin pleb falling down the rabbit hole and willing to share every bump, scratch and knock along the way
View more articles from this author
PrevPreviousWhy Proof of Stake Is Bad For The Environment
NextLiquidity Pools On The Liquid NetworkNext