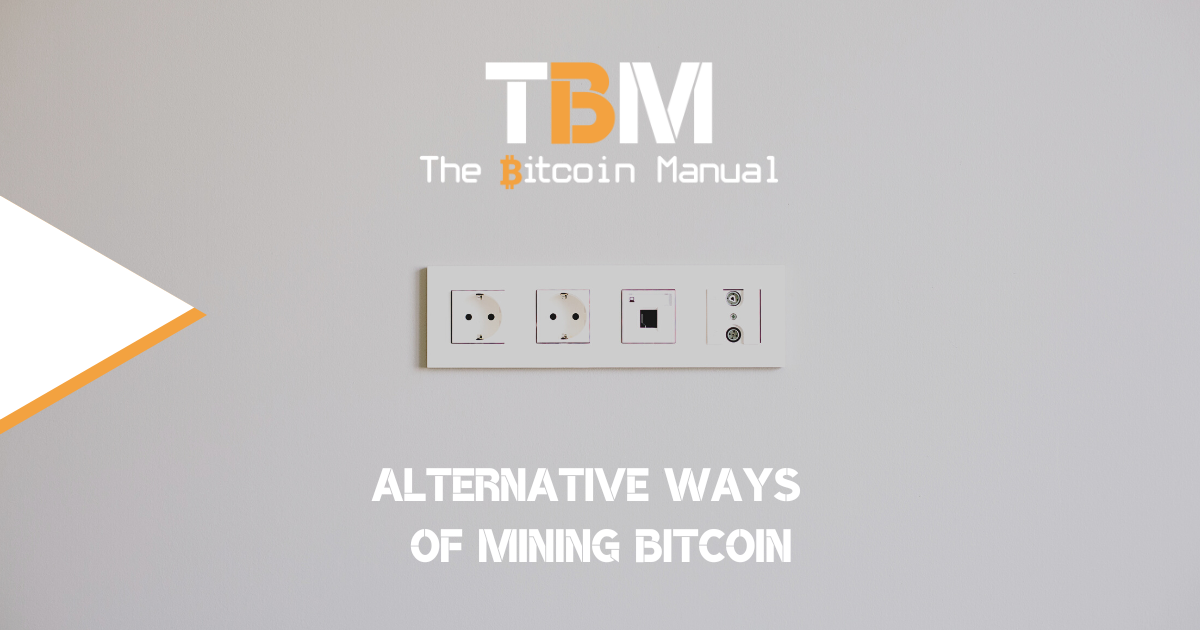 To many, an onlooker who has not taken the time to learn about bitcoin, it looks crazy; why do people have to build special computers to solve specific math problems to generate money? When you’ve lived in a world of fiat money where units can be created at will and capital flow is decided by popular opinion and political connections, it would seem crazy.

When all you know is a world of no cost to money, adding a cost to money and competition to money creation is definitely a foreign concept. But bitcoin isn’t crazy; it might be a grassroots movement, it might be religion, it might be the greatest monetary experiment of the last decade, but it could all prove worth it.

Adding a cost to money, having a known issuance, tying it to energy and having a hard cap might be the soundest monetary system this generation has ever known, so what do we have to lose? We spend energy on many pursuits that some would deem a waste of time, but that’s the beauty of it all; if you’ve paid to access energy or you’ve created your own energy production, who has the right to tell you what to do with it?

No one, you can do as you please.

Bitcoin mining has undergone some pretty extensive changes over the years; what started as software you would run on any laptop or desktop and net a few coins you couldn’t sell anywhere turned into an online gold rush. First, people burned out their laptops and desktops, then they burned out custom mining rigs and graphics cards and eventually, the industry matured to have its own dedicated mining devices.

Once we reached this stage of mining adoption, it became a game of energy; if you could access cheap energy, you could outcompete others in this hash race to the next bitcoin block. Sure mining rigs are improving all the time, and there are more devices than ever, adding to the complexity of mining and running a profitable operation. However, your variable cost in energy will always be your biggest concern when mining.

As bitcoin mining becomes more competitive and energy intense, those plugging their miners into an ordinary wall socket are either mining for non-KYC sats or willing to eat losses over the short term while betting on price appreciation. As for those looking to compress the time to profitability, we’ve seen some interesting techniques emerge. Since the bitcoin network is source agnostic, if you can find a way to generate enough electricity to power a bitcoin mining rig and point hash rate at the network, you could earn bitcoin as a reward for supplying that power to secure the network.

Some of the techniques miners have devised to net some bitcoin range from unorthodox to ingenious and downright crazy. Here are seven of the strangest attempts at extracting bitcoin ever conjured.

At the Institute of Aging in The Hague, one startup has learned how to mine with the help of human heat. Scientists have developed special suits that capture the heat generated from our bodies and turn it into electricity to mine bitcoin. While anyone who has watched the matrix must be freaking out right now, the invention cannot yet be taken seriously. The creators say that the project has become more of an art installation than a way of earning money.

“A single human body at rest radiates 100 watts of excess heat,” explains the IoHO website. “We created a body-suit that uses thermoelectric generators to harvest the temperature differential between the human body and ambient and converts it into usable electricity.”

When drilling for petroleum, oil companies often discover associated gas, commonly referred to as natural gas. This excess gas, often called stranded gas, is flared or burned due to the lack of resources and infrastructure needed to sell it properly. In the case of short-term wells, it makes no sense to set up a pipeline; while oil can be trucked from a remote location, gas requires a pipeline or an operation to super cool it to have it moved physically, which is not financially viable for every situation.

Instead of burning that gas and letting it go to waste, bitcoin companies are partnering with oil drillers to give them an out, the miners take the gas, mine bitcoin, and provide oil companies with additional revenue, and the oil company can brag about their lower carbon footprint too.

Crusoe Energy is one of the companies that pioneered bitcoin (BTC) mining through piggybacking off wasted natural gas as a power source, and it is now a billion-dollar company. To give you an idea of how popular the industry has become, in April this year, Flared-Gas Bitcoin Miner Crusoe Energy Raised $350M Series C; now that’s some series backing for an operation that started in 2018.

We have landfills in every country, and our wasteful fiat ways mean they continue to grow every day, as those garbage patches turn into mountains of waste. Once a landfill has been deemed ready to be covered, pipes are laid prior to it being covered to allow harmful gas to escape, which could prove dangerous if there is not a means to have it let out.

Now having that methane escape is only one part of the problem. Do we let it escape into the air, do we burn it off as we do with gas flaring or do we turn it into a source of electricity? I think everyone would agree that turning it into a temporary source of energy would be the best course of action, but what business wants to operate close to a foul-smelling place like a landfill?

I’ll tell you; bitcoin miners do; we don’t mind the stench because we smell money-making opportunities. Landfills worldwide are now being targeted not only by opportunities entrepreneurs but large mining companies who want to diversify their energy sources too. To give you an idea of how these opportunities are starting to gain traction, Vespene Energy in California were able to raise $4.3 million to start their first landfill mining operation with one pilot project.

Not a bad raise for a bunch of glorified bin men, isn’t it? Is your local landfill starting to look like it needs to be paid a visit now?

A circular economy project called “Bitcoin lake” has emerged in Guatemala, which has taken a different approach to attract UTXOs into the region by starting small and focusing on a contentious local issue. Cooking oil in the region is often thrown out into the street or finds its way to the landfill, which sits several hundred feet above Lake Atitlán, causing contamination of the water supply and costing millions to keep clean. So instead of having this constant supply of cooking oil dumped across the town, the Bitcoin Lake project began collecting and repurposing the used cooking oil to power bitcoin mining ASICs.

By focusing on one area of the problematic cooking oil, Bitcoin Lake has not just stopped a prominent source of pollution and turned it into a money generator. The cooking oil is collected from various people locally and converted into Biodiesel through ‘transesterification’. This process converts fats and oils into Biodiesel and glycerin, which can then be used to power electricity generators.

The electricity from this is then used to power bitcoin mining machines and net the project a regular income.

There have been plenty of bitcoin mining operations around the world leveraging hydro, many of which were situated in China before the mining ban. Typically these are formal companies that have struck up agreements with power producers who have a surplus or cannot transfer their energy to other regions due to infrastructure issues. So instead, selling that power to bitcoin miners generates revenue for them, allows them to operate at full capacity and hopefully extends the reach of their power generation.

But corporate miners aren’t the only ones mining for bitcoin on the riverbanks; oh no, we’re also seeing some pretty interesting setups in the Guerrilla mining space, setting up next to a water source and generating your own power to feed into your miner.

Used tires are not only used for gardens, repurposed playground swings or shoes; they can also be turned into electricity which seems to be a lot less hassle than grinding them down to make other products. Certain countries like Turkey sit with tonnes of tires each year that cannot be resold or repurposed, and as they pile up, the only option is to burn them and generate electricity. Considering 3 billion tires are created yearly, there isn’t a short supply of tires hitting the rubbish heap.

Tires not only contaminate areas where they are dumped, but even in landfills, they continue to erode and release chemicals into the ground, contaminating the region and the underground water supply or being hazardous to animal life. Burning tires isn’t without its trade-offs; it does release toxic chemicals into the air, which is one of the critiques of the practice.

But the bitcoin honeybadger doesn’t care, and since 2017 we’ve seen companies like PRTI, which recycles unusable tires into energy, strike a deal with Standard American Mining to push some of their energy production into a mining firm.

Mine on your own dime and your own time

To borrow from Brandon Quittem, bitcoin is a pioneer species; it actively seeks out the harshed clients, looking for energy to bring online. Once it finds an energy source, it pays to keep it going while other infrastructure can be built around that source and leverage it for alternative means. If those alternative means are more profitable than mining bitcoin, you’ll see bitcoin miners eventually ship out and head off in search of new cheap energy sources. Leaving behind an established energy source with a market that demands it.

While not every one of these options is going to make it, it sure is interesting to see how far people are willing to take the bitcoin experiment and shows you what an open monetary system can do when it’s left alone to try and survive.

To mine, or not to mine?

What method of bitcoin mining is your favourite? How do you think these alternative energy sources will compare in the future? Have you seen some unique bitcoin mining operations you’d like to share? Let us know in the comments below.

South African bitcoin pleb falling down the rabbit hole and willing to share every bump, scratch and knock along the way
View more articles from this author
PrevPrevious4 Ways To Use Your Bolt Card
NextHow To Reduce Bitcoin Transaction FeesNext