Why Shitcoins Are Bullish For Bitcoin

Home » Articles » Why Shitcoins Are Bullish For Bitcoin 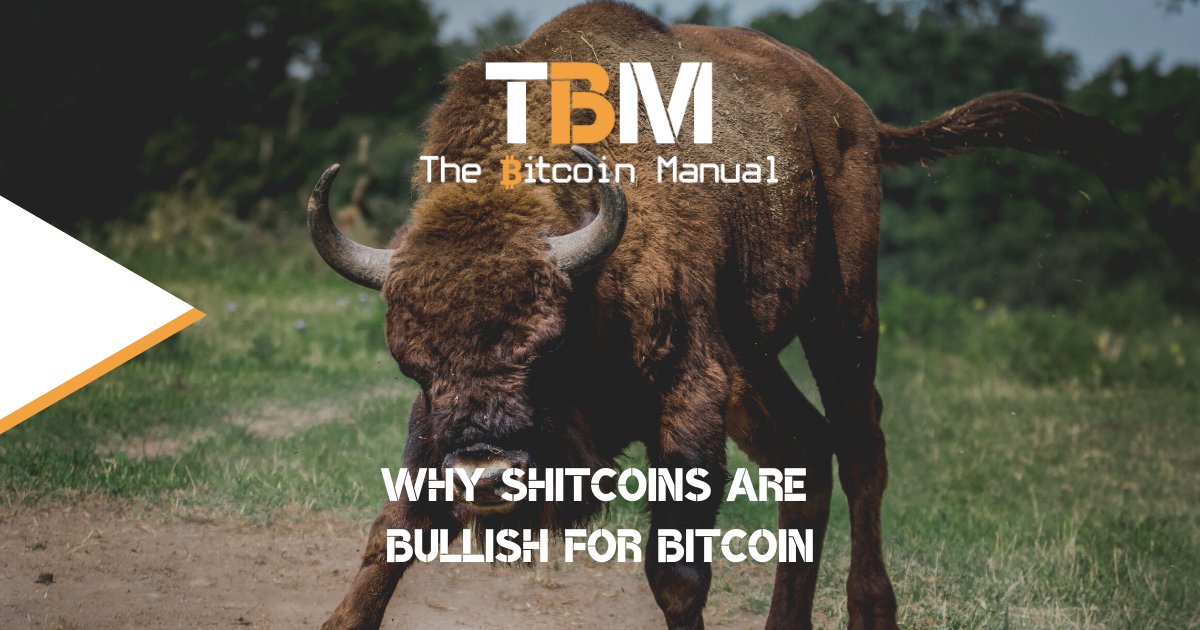 Getting into the broader cryptocurrency market, you will be bombarded with the promise of decentralising everything and how blockchain will be the future of *insert niche use case*.

Since Bitcoin’s inception and rampant growth and relative success, there are thousands of blockchain-based digital currencies trying to compete with it and siphon off-market share from Bitcoin.

Hardened Bitcoiner will naturally be vehemently against any shitcoin, and rightly so, they’ve proven to be notoriously a losing game for the smaller investor. Many Bitcoin plebs are those who were sold an altcoin pitch and rightfully rekt and learned their lesson.

Now I am not saying Shitcoins don’t have a right to exist, people can do with their time, money and labour what they will, and all participation is voluntary. If you want to gamble or take an unmeasurable amount of risk to hopefully exit and beat Bitcoin games over a short period, by all means, don’t let me stop you.

If we believe in a free market, we have to accept that these projects will exist. They will make decisions based on low time preference and ultimately lead to their downfall.

Now everyone who holds $100 of a shitcoin will tell you their coin is the best, and Bitcoin is old technology.

A deluded measure of success.

Shitcoins naturally want to mirror the NGU technology for Bitcoin by trying to employ a host of tactics to try and engineer its coin’s price appreciation. We’ve seen coins do lock-up periods, burning tokens, staking tokens, delegating tokens, rehypothecation tokens. They are even issuing new tokens and locking them into pools with one another.

These applications scream of desperation, as altcoins try to increase demand and reduce the supply of their monetary units to try and keep pace with Bitcoin.

When you measure success in a currency that continues to inflate at greater rates due to its inferior monetary policy, it’s always going to put a shine on anything that has a lower issuance rate.

So looking at an altcoin and Bitcoin in USD value, for example, they all seem to be appreciating. So when you try to make a case against these coins, people will throw out what I feel is a near meaningless stat regarding their appreciation.

When you measure these coins versus Bitcoin, you’ll notice that they continue to lose value over time, and this does not look like it’s set to change anytime soon.

When these currencies are age, and the supply is beginning to spread, the hype of getting in early fades, the inferior monetary policy, security and adoption begins to show. Then we see how these coins depreciate against Bitcoin.

People don’t like being told what to do; humans learn by imitation and via negativa. The best way to learn is to lose or fail, and the altcoin market is living proof of that. If we are to prove to the world that the Bitcoin formula is superior money, we have to allow them to create competing structures and narratives.

Each coin formula and decision that an altcoin made will be tested, and Bitcoin will need to dispel these notions one by one. As these altcoins continue to lose pace to Bitcoin and devalue, they’ll be squeezed out of the market.

Thousands of cryptos have already died, thousands still exist, and many more will die as Bitcoin competes with inferior money and stores of value, purging them out of the market.

Suppose we are to vindicate the various decisions Bitcoin has made in its monetary policy, security protocol and governance. Then there’s no better way than to have it compete 24/7 against other chains and tokens and to destroy them one by one in real-time.

History will be etched on the chain.

We are going through a monumental shift in the understanding, distribution and measurement of value in the modern age. The Bitcoin time chain will be the measurement of it. Any chain that can provide value to consumers would need to attract Bitcoiners to part with their capital; this will get harder as Bitcoin continues to appreciate.

The growth in Bitcoins market cap as it absorbs more of the monetary premium looking for a home will be the measurement that determines how well any of these coins can perform against Bitcoin.

As new projects come online to try and compete with Bitcoin in some niche instances, they bring new ideas. Most of them will be completely useless and only function in a Ponzi like system, but some of the code and concepts will be useful and can be migrated over to Bitcoin over time.

Altcoins realise they cannot compete with Bitcoin when it comes to monetary policy or security. So they are forced to compete through innovation, and this pushes their need for ideas forward.

As new ideas are explored and tested in the market, Bitcoin will pick and choose which ones it can accommodate and absorb it into its ecosystem. The Bitcoin network can then provide that specific innovation with the security and capital that other chains cannot provide.

If you believe in Bitcoins mission, you shouldn’t be too phased at what happens in the altcoin market. It is all noise that will temporarily work its way out over time. If you are going to compete with the 12-year history of sound monetary policy run on the strongest and most robust computer network, you better bring something special to the table.

If you don’t, you will wither and die against a network engineered to withstand any attacks. Bitcoin has proven so far that it’s pretty hard to compete against whether you’re an altcoin, fiat currency or government.

How do you beat something that continues regardless of what you say or do? Bitcoin is designed to outlast it all.

South African bitcoin pleb falling down the rabbit hole and willing to share every bump, scratch and knock along the way
View more articles from this author
PrevPreviousHow Do You Invest In Bitcoin?
NextFiat Trick Or Bitcoin Treat?Next