Why Does Bitcoin Use Electricity?

Home » Articles » Why Does Bitcoin Use Electricity? 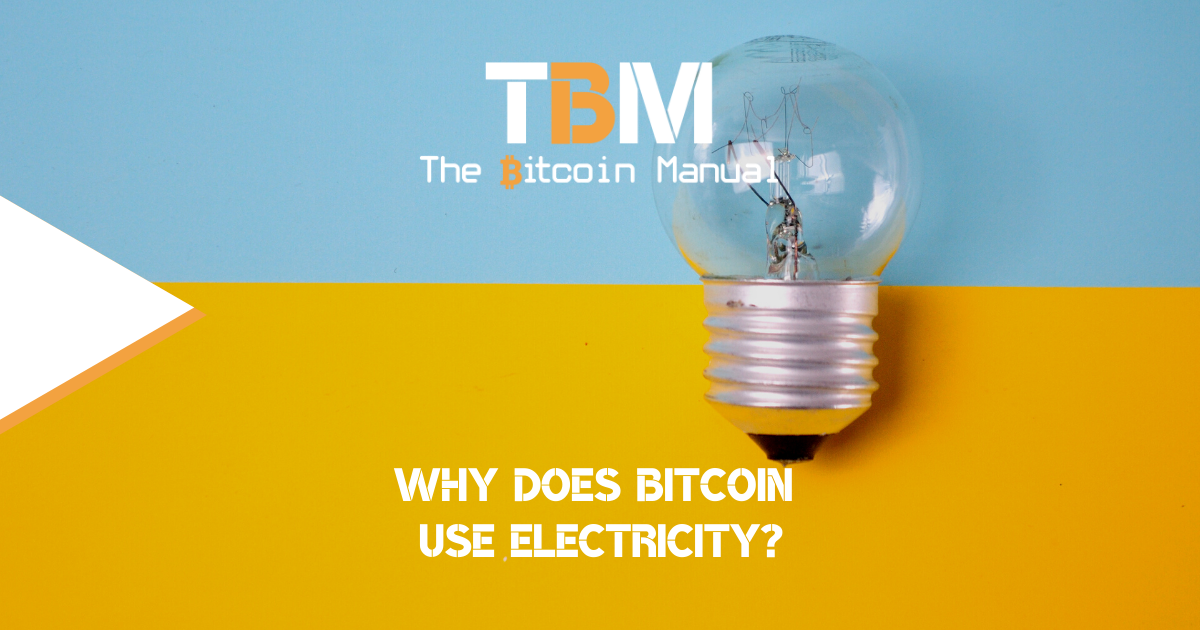 Bitcoin hitting new all-time high’s are always going to attract attention from mainstream media, and with that attention comes some poor analysis and understanding of the network. Plenty of attention is focused on the amount of energy the Bitcoin network requires to scale and secure more of the worlds purchasing power.

We’ve seen countless snippets on Bitcoin using the same amount of energy as this company or this country and considering it a waste.

In a world where climate hysteria is at an all-time high, it seems if you are deemed to be using any considerable amount of energy; then, you are evil incarnate, boiling the oceans and creating acid rain. When you focus solely on the amount of energy used, it’s easy to get caught up in those narratives and not look at all the unseen or somewhat unspoken good Bitcoin produces with that energy.

To those who think Bitcoin is nothing but unnecessary digital tokens, it wouldn’t matter if Bitcoin ran on 100% renewable energy; they would still have a problem with it. If you cannot see the problem Bitcoin is trying to solve, you cannot justify the need for all the electricity it demands.

Let’s be clear Bitcoin miners do NOT steal electricity from the grid or various suppliers. Miners are simply a profitable operation and can therefore pay for the electricity needed to run it. If mining was not profitable, people would not bother buying more and more electricity to support the Bitcoin network.

So why exactly does Bitcoin need all this electricity in the first place?

Why does Bitcoin use electricity?

A short answer would be, Bitcoin uses a lot of electricity to maintain the incentive structure of its economy and to secure the network. Since Bitcoin only exists in the digital world. To give it value, it requires cost in labour and energy in the real world. The electricity used to mint a Bitcoin, therefore, leverages thermodynamics.

The requirement of electricity to create a UTXO, therefore, links the real world with the digital world.

To acquire Bitcoin requires a real-world cost in labour and resources through the process of mining Bitcoin. In mining, process computers are in a race against time with one another. Each computer connected to the network provides hashing power to try and solve the next secret key.

Once a network of computers finds that key, they are allowed to secure a new block to the network.

In return for securing that new block, the computer miners receive a reward in fees from transactions in the block and newly minted Bitcoin. The new Bitcoin reward is known as the block subsidy.

As Bitcoin becomes more valuable, it attracts more people to connect computers to the network and provide hash power in the hope of securing some Bitcoin reward.

Why is Bitcoin’s energy use so intensive?

As Bitcoin continues to appreciate, it opens up a larger profit margin. As long as the cost to mine a Bitcoin is less than the value on the market; miners walk away with large profits. This promise of juicy rewards fuels the rise in competitive mining operations dedicated to bitcoin.

The protocol is designed to maintain network integrity, ensuring a stable currency supply by making the calculations more complicated when many people are mining and easier when a few miners are at work.

Since Bitcoin is an open network that will accept hash power from anyone who is willing to meet the rules of consensus, it makes it easy for people from all over the world to connect and provide electricity and resources to the network.

This open protocal makes the Bitcoin network is competitive, robust and decentralized in terms of its network security. We’ve seen the Bitcoin network grow from home computer to garage mining to now fully industrial mining operations, and it’s only getting bigger and more innovative with time.

Why proof of work requires resources?

From a technical perspective, the mining process asks computers mathematical problems that can only be solved by trial and error (and because the odds of being right in a single try are one in trillions), computers must constantly run to have the best chance of finding the key, verifying the latest transaction block, and being rewarded with the newest batch of Bitcoin.

Because this mining is done using powerful computers capable of generating thousands, millions, and even billions of hashes per second, it requires large amounts of electricity.

When you tie effort and expenditure of resources to creating monetary value, you limit the ability for network participants to reward themselves with currency units at no cost. An issue that has plagued the fiat system, as money can be printed and issued at any rate and any time.

Bitcoin, however, has a fixed schedule, and despite the competition, the network will adjust to maintain that schedule; this is known as the difficulty adjustment.

First, there’s an important distinction between how much energy a system consumes and how much carbon it emits. While determining energy consumption is relatively straightforward in terms of gigawatts or terawatts consumed.

You cannot extrapolate the associated carbon emissions without knowing the precise energy mix — that is, the makeup of different energy sources used by the computers mining Bitcoin. For example, one unit of hydro energy will have a far less environmental impact than the same unit of coal-powered energy.

Bitcoin’s energy consumption is relatively easy to estimate: You can look at its hash rate (i.e., the total combined computational power used to mine Bitcoin and process transactions) and then make some educated guesses as to the energy requirements of the hardware that miners are using.

When it comes to its carbon emissions are much harder to ascertain.

Mining is an intensely competitive business, and miners tend not to be particularly forthcoming about the details of their operations, nor would they opt for any energy source that eats into their margins; they are actively looking for the cheapest energy source.

Bitcoin is a resource agnostic system; it doesn’t care which method of energy production is used to power its network making it a versatile option for energy markets. You see, when energy is created, if it is not used, it is lost. Even if we stored it in batteries, those batteries would lose charge over time and waste valuable resources.

Since the mining process is such a ruthlessly capitalistic system, miners have the incentive to run the most efficient operations. Additionally, they also have the drive to find the cheapest energy sources to try and undercut their competition.

Yes, Bitcoin uses fossil-fueled energy, but it’s not the only source of network energy. Currently, an estimated 39% of proof-of-work mining is performed using renewable energy. However, renewable energy is unreliable, so there will always be a need for a more robust energy production source.

We’re seeing Bitcoin leverage solar, wind, hydro, and geothermal energy with the likes of volcano miners. We’re also seeing Bitcoin tap into wasted and stranded energy sources like gas flaring, hydro in remote areas or nuclear plants. Bitcoin effectively provides the best battery for storing power that would have otherwise gone to waste and provides humanity with a way to extract that energy at a later date.

Bitcoin is the buyer of last resort and brings energy efficiency.

Bitcoin may use a lot of electricity, but if it were possible to use that electricity for something more profitable and productive, it would be diverted away from Bitcoin.

Anyone who can think of a more efficient way to use electricity to compete with Bitcoin can therefore access those resources. If the idea is an unprofitable one, it is destroyed by the Bitcoin network as Bitcoin’s constant demand for energy provides a floor for producers.

They no longer need to lower their prices and therefore allocate energy resources to the best possible use.

South African bitcoin pleb falling down the rabbit hole and willing to share every bump, scratch and knock along the way
View more articles from this author
PrevPreviousWhen Does Bitcoin’s Market Close?
NextEarly Bitcoin Wealth Will Be WastedNext