DEFI Are Underpants Stealing Gnomes Who Learned To Code 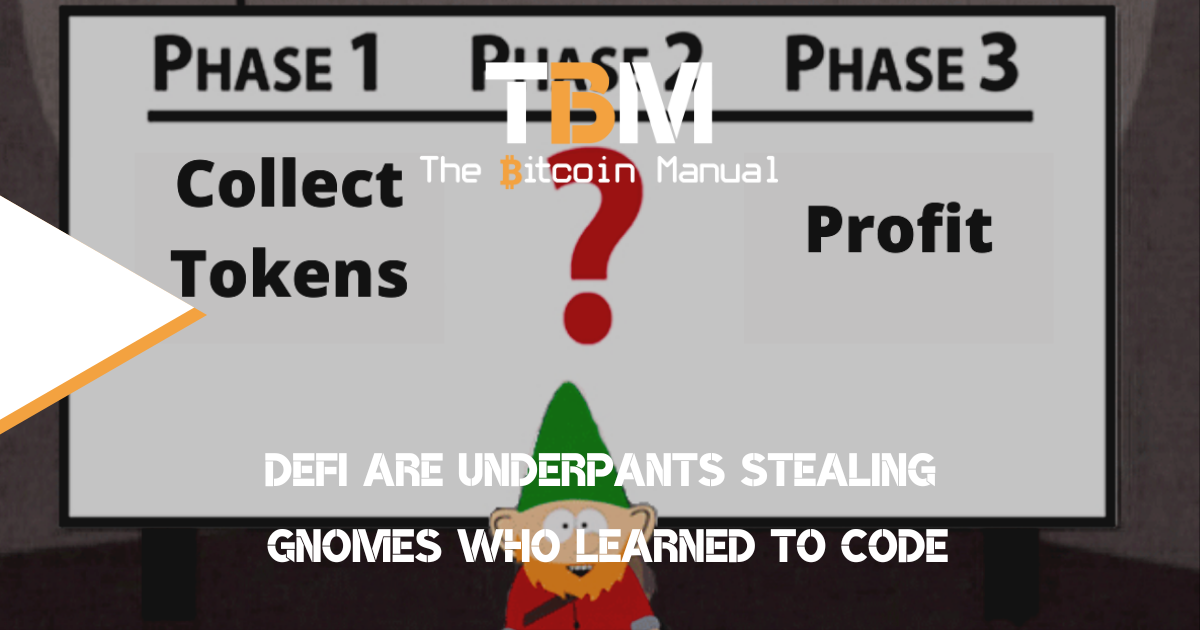 When I look at DEFI, every single pitch is entirely out of touch with reality, yet no one seems to question it. All of DEFI can be taken down with a simple question.

Ask any DEFI proponent, and they’ll come up with a long, convoluted answer that is a substitute for “I don’t know” I am just here to collect tokens.

Before you say oh, you can’t knock it until you tried it, I’ll stop you right there. I have tried it. I spent money, although a small amount, to try out these tools, and while I could have had more bitcoin, I am much wiser with practical knowledge of how it works, and that’s why I know it doesn’t work.

DEFI reminds me of the underpants stealing gnomes, but instead of collecting underpants, its tokens and using the narrative of web 3 and metaverse and amplifying it with social media shilling.

I don’t get the reference

For those who didn’t click, the underpants gnomes are a classic episode of South Park. In the episode, Tweek has his underpants regularly stolen by a group of gnomes. The boys (Stan, Kyle, Cartman, and Kenny) are partnered with Tweek on a school project and stay over at his house for the night.

The clip below should give you all the background you need 🙂 but I highly recommend checking out the South Park episode (season 2, episode 17), which aired all the way back on 16 December 1998, just showing you how old this idea is and how deeply it’s ingrained itself in society today.

The reference may have been towards large corporations at the time, but it applies to political movements, start-ups of today, investments like venture capital, SPACs and, of course, the wonderful world of cryptocurrency.

The DEFI business model, no matter the protocol, no matter the token name, no matter the backing, all employ the same base assumption to attract users, give us money and collect our token, and through some secret sauce we can’t tell you about due to so much competition and copycats, you will eventually profit.

Now a DEFI yield hog will tell you there are so many different options, and they are all snowflakes and should be treated as a basket of risk. Yes, as soon as you stake in enough protocols, suddenly it becomes diversified, and you’re safe, right? The theory goes, that if you keep earning different tokens, one will outperform massively to compensate you for those that fail and those that provide mediocre returns.

Each DEFI offering is a derivative of the original business plan, but phase 1 is where the innovation comes in, this is where most DEFI spend their time, building and crafting the narrative around phase 1; most of the protocols you’ll find will pitch you one of the following:

So what exactly is phase 2?

Phase 2 is proof of work, something most people want to avoid; why do you want to do work? Work sucks; give me the profit; how do I get rich quick? I want wealth without work. That’s the secret, skipping phase 2, which is the fundamental underpinning of real profit.

In business, phase 2 is about finding a competitive advantage and exploiting it, creating new ways of operating, and creating new products and services that can be produced cheaper than the market is willing to pay for access to it.

In money, phase 2 is ensuring that there is a barrier to acquiring money, that there is a cost to create it, and a cost that increases so as to limit access to it. That’s what bitcoin does; through its proof of work protocol, phase 2 is all about work.

Now, doesn’t that sound like a bother? Why do that when I can slap my hands on a keyboard and create profits, I can make my own yield instead.

Where does the profit come from?

Hey, you’re lying to me; I had a friend who used DEFI and made out like a bandit, so how come he can make a profit? How did he make it to phase 3? Yes, this is the exception to the rule and not the norm, but I do admit some will be able to make it to phase 3.

I am not saying it’s not impossible, only that it’s improbable for most of you. There are four types of people who can make it to phase 3 in DEFI, namely:

All 4 of these groups have one thing in common; they were holders of the DEFI token earlier than the majority of holders; they were able to sell their stake in the DEFI ecosystem to others who thought they could, in turn, re-sell it to someone else.

These groups have a certain amount of a “new token” which they are willing to sell you for a price, they get Bitcoin or stablecoins, which they can pocket as profit, and you get their token in return.

DEFI dev’s incentive is to keep you in phase 1

While they get to enjoy phase 3.

Here’s how the game goes, I am a developer, and I can create as many coins as I would like because I have full control over the system. So I create TBM coin DEFI, and I promise you 20% return on your money.

You give me $100 worth of stablecoins; for simplicity’s sake, let’s say the TBM coin is also worth $1 at the time. I pay you 1.6 TBM coins per month to honour our agreement of 20% APR. I can pay you this return because I can mint as many coins as I like, and as long as people are willing to buy the coin for $1, I only need to pay you 1.6 TBM coins.

I can create any interest rate I want as long as it’s going to attract enough demand to keep buying and holding my own while I collect the real capital from the exchange of my coin.

How does bitcoins’ 3-step process work?

Unlike DEFI and the cryptocurrency space, Satoshi considered that there needed to be a phase 2 for the network to survive.

Speculators and traders, most of them get wrecked, and they provide an additional profit to those that hold the coin, removing capital from their hands due to bad decisions and trying to time market movements.

If you’re new to investing, regardless of the asset class, I think you would do well to consider how the investment would generate a profit. If it’s a business, does it have some competitive advantage that others are willing to pay a premium to access, does it have a unique way to cut costs, does it have a revenue stream that continues to grow, does it reduce its cost of operations over time?

It’s up to you to discern fact from fiction, and if phase 2 of any investment doesn’t stand up to scrutiny, you may want to reconsider taking a position as you’re investing in pie-in-the-sky ideas.

Developing a strategy that is executable within the confines of the resources available and can generate a difference between the cost you produce versus the cost customers are willing to pay isn’t easy. Finding out how to monetise time, skill, or a combination of products is what makes the entrepreneurial journey such a fascinating one.

It’s about how your competition will look at competing with your monetisation strategy and how you protect against it. It’s about how these constant battles help create better products that are more valuable to all involved; that’s what business is all about.

“How does collecting underpants (substitute for the token) turn into profit?”

You may want to pass, or you could end up walking around with the emperor’s new clothes and not realise it until it’s all too late.

Does it DEFI logic?

DEFI is no different from the ICO phase, where small agile groups of people can raise a considerable amount of cash; they’ve figured out how to do that and figured out how to provide you with a token that represents a promise of future profit.

But what they haven’t figured out is how to use that capital to generate constant and consistent profit over time with a viable business model that has customers willing to pay for the service.

Like the gnomes, sometimes we invest in companies and yes, make no mistake, DEFI is companies that seem to have exciting first and third phases but without phase 2. Once the speculation and excitement around 1 and 3 fade, so too does liquidity and if you’re not out the door before then, you could be left holding a useless token, like so many before you.

Have you fallen for the DEFI revolution where logic is thrown out the window and tokenisation is pitched as a way to solve all the world’s problems? Which DEFI protocol happened to catch you with a clever narrative?

Let us know in the comments below; we’re already keen to learn from others.

South African bitcoin pleb falling down the rabbit hole and willing to share every bump, scratch and knock along the way
View more articles from this author
PrevPreviousHow To Delete Your Celsius Network Account
NextWhy Bitcoiners Emphasise Having Your Own Private KeysNext