Bitcoin Is Only For The Rich

Home » Articles » Bitcoin Is Only For The Rich 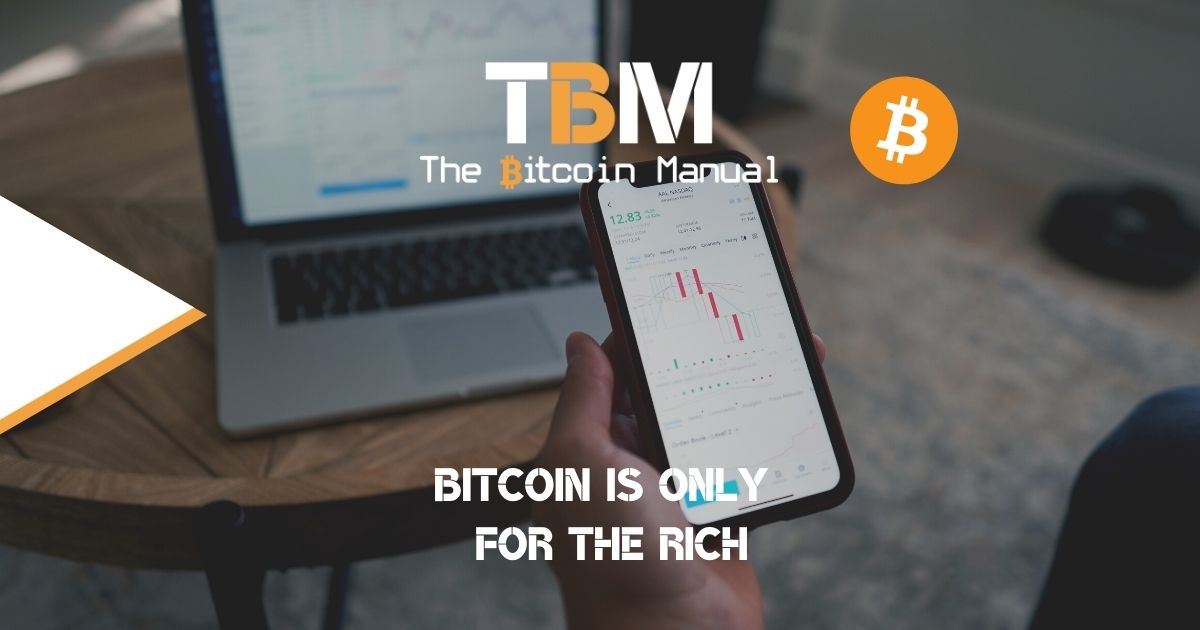 I hear this argument all the time; Bitcoin is only for the rich. A statement that is starting to gain traction among the general public as the unit price of a Bitcoin continues to run. Only a rich person can afford to buy Bitcoin.

I know I sure as hell don’t.

Yes, I agree with you, and I am glad you have a basic grasp of arithmetic because today will be a math lesson. If you’re only waking up to Bitcoin in 2021, then it may feel like you’re too late. 2021 is the year that has safely priced out most middle-class normies from buying a whole coin, and this trend will continue.

I would happily stick my neck out and say that by 2022.

There will be less than 1% of retail investors globally who have the free cash flow available to acquire 1 Bitcoin. As each year passes by and the scarcity increases, this will only make 1 Bitcoin even harder to obtain, and one day, even a USD/GBP or EUR millionaire will not have the capital to purchase a whole coin.

Many may not even have the chance now, as anyone worth millions is not holding their wealth in cash. They may have to trade one of their asset for Bitcoin instead.

So Bitcoin, or rather the whole coin and multi-coin scene, will be the playground of the rich, the corporations, the banks, the governments and the financial institutions.

Retail had 12 years to front-run these more prominent players, and now it’s their turn to get in. If Bitcoin was going to succeed, this was ALWAYS going to be the logical next step.

There is no such thing as fair distribution.

People had 12 years before to get in for Bitcoin became a legal currency of a country. You had a decade to acquire it for under $3000. Does anyone have the right to complain? I don’t think so; the longer you wait, the less risk you take, but also less of the upside you get to benefit from overtime.

No currency or asset starts with universal adoption; there are always be those who weigh up opportunity and risk and act on it ahead of others.

When we also consider that Bitcoin is absorbing users from a system where the distribution of wealth is clearly out of wack, it will manifest similarly. If I have millions of fiat currency, I can naturally buy more Bitcoin than someone who doesn’t have access to that level of fiat.

I am not trying to make any excuses for Bitcoin; I am merely stating how this game currently plays out. If your objection to acquiring Bitcoin is unfair distribution, show me a currency with fair distribution.

Bitcoin is entirely voluntary, and those who partake in its monetisation choose to acquire a stake in the network. I can’t think of a fairer system, can you? Edify me in the comments, please.

The unit bias is holding you back from Bitcoin.

Humans have a bias towards having a complete set of something; we sure do love collecting and hoarding things when we come from a consumerist fiat driven world—the need to own one or more than one has always been a rationale that serves you well.

The unit bias the perception of completion, that you’ve achieved a milestone, but the real world doesn’t work like that, there are no absolutes, and it’s the same for Bitcoin.

Do you honestly think people with one coin or multiple are sitting on their arses? No, Bitcoiners continue to stack infractions that they can afford because they are motivated to acquire a rare asset that provides a store of value the owner can verify.

Sure it may sound satisfying to have 1 Bitcoin, but honestly, you don’t need to have 1 BTC, and it will become increasingly apparent with time. To hold off getting into Bitocin because you can’t acquire a whole coin in one go will prove to be a painful lesson for many.

In my opinion, looking at the shitcoin market plays off the idea of unit bais, and many shitcoiners and retail investors fall for it. Instead of thinking I could acquire a certain amount of Bitcoin for x amount of fiat.

The unit bias takes over, and they think, well, shitcoin A gets me 1 unit, but Shitcoin B gets me 50 units. So since I got more units of the shitcoin, it seems better value for money.

Unit bias is a mistake many shitcoin projects count on you to make and why they create so many monetary units of their coin, to be able to sucker in those thinking more units means more value.

What new coiners fail to understand is Bitcoin is divisible by 100 million units. One Bitcoin consists of 100 million individual units called satoshis. If you acquire one satoshi or 1 Bitcoin, they have the same appreciation percentage.

If Bitcoin moves up 5% today, the satoshi you have also appreciated by 5% in fiat terms. Sure it is a negligible amount, but the appreciation percentage is the same. You can acquire as many satoshis as you can afford and gradually build a position in Bitcoin that will benefit from NGU technology.

For me, the goal isn’t to have one Bitcoin; it’s to have more Bitcoin than I did yesterday, last month or last year. As long as I have savings, I would like to protect and store long term,

Don’t see your stacking as competing with others on the network, but see it as competing with yourself. Your stack is no one’s business, but you’re own; you control it, say how much you’d like to allocate and feel comfortable holding.

If you choose to hold zero, that’s fine too, and you’re NGMI, but it’s still a choice I respect. If you want to be brave and try to make it in a corrupt system where the rules are constantly changing, be my guest.

If you want to save using a network you are free to participate in, verify all the rules and hold any amount of your wealth without anyone’s help, then Bitcoin may be what you’ve been looking for all this time.

Bitcoin is only for the rich.

To wrap it up, I agree with the sentiment that Bitcoin is only for the rich. Those who acquire Bitcoin will continue to see their wealth protected from fiat debasement and see it appreciate against any assets, goods and services they would like to acquire in the future. Bitcoin is about building wealth through saving your surplus productivity. Bitcoin teaches you to weigh up your options and only tap into your resources when you need them.

Bitcoin isn’t a get rich quick scheme, but it is a tool that can help you preserve and build your wealth.