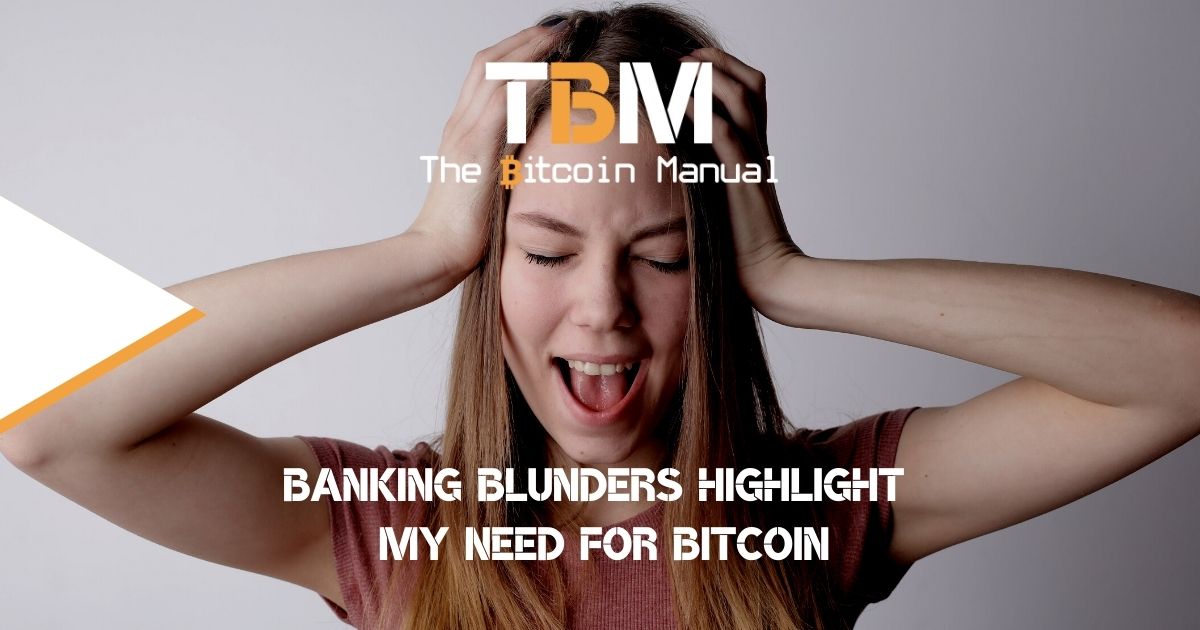 I don’t think anyone thinks about the power their bank has over them until they fall victim to its omnipotence. We all believe that bank works for us; we’re the client, they serve us. It’s hardly the case, but a fallacy. We assume the same relationship we have when we trade money for goods and services extends to banks, but it’s hardly comparable.

As a banking user, you’re an unsecured lender, handing over your funds to the bank to rehypothecate as they feel like returning a yield for themselves and, in some cases, share some of that with you. They hold all the cards, the keys, and they make the rules.

You only agree to hand over your money in exchange for a promise that it’s kept safe and that you can access it conveniently at any time. I think that access to funds and payment rails are what keep us in the banking system, but what if that’s taken away? What use do we have for banks then?

We all know banking and finance is an obsolete bullshit job; the only reason they have a job is that we’re forced to comply with their payment rails. Since we don’t have a choice, we’ve created these oligopolies, and as they continue to rent seek via their payment rails, these bloated institutions make up new riles to give us the runaround.

A runaround aimed to validate their existence and the employment of people to run their Rube Goldberg like financial system. It would be laughable if it weren’t also so painful for customers like you and me.

The bank called me up a few weeks ago and said that my card needs to be replaced. Banks don’t know what to do with their time and drum up ways to give their employees work. Anyway, they have to follow Due t whatever arbitrary rules the higher-ups create.

After discussions, they asked me how to receive my card; I could pick it up at a branch or ship it to my residential address. Since branches are pretty much closing faster than ever, driving to the closest one for something I didn’t need in the first place seems pointless.

So I asked them to ship it to my home. It was agreed that it was to be sent to my address and that upon receiving my new card, I would need to activate it, and the old card would be made inactive.

I was getting cut off from my funds.

This was about three weeks ago, and today, I tried to purchase a sandwich on my card as I would any other day. We’re having power outages for 6 hours a day in my area, so I can’t cook at home. That’s another problem, but anyway, my card declines.

Luckily I had cash to settle and went on my way.

The first thing I did upon getting home was to check my card; it had been removed from my banking app. So I called up the bank to ask why my card was no longer available on my app.

They state that I’d received my card and therefore the old card needed to be switched off. I informed them that it was not the case and requested that the recording of my conversion be pulled up.

Yeah, that’s right, assholes, calls are recorded for quality and purposes of showing customers that you’re incompetent. Anyway, they realised that the card was shipped to a branch I DONT EVEN BANK With, nor did I request that option.

To solve the issue, I would now need to drive 35 km to claim the card or have it shipped to my residential address—either way, my card is now blocked for seven days.

So through no fault of my own, I am restricted in accessing MY FUNDS. Do you think the bank cares how this inconvenience my life? Hell no.

Thankfully I can still access cash via the ATM using my cellphone, but what if we moved to a cashless soceity? I’d be fucked with the $10 worth of fiat I have left in my wallet to live for seven days.

Not malicious, only incompetent.

Now, this annoyance and limiting of my access to my money were clearly down to internal miscommunication and poor administrative practices. It can happen to anyone, and it just so happened to be me, a Bitcoiner; go figure, right?

You’re already struggling to hold onto me as a customer as it is, and it feels like you’re vindicating my decisions every step of the way.

While this is their fault and they’re open to correcting it, in their sweet time, I might add, it shows the dangers you unwillingly face.

Suppose access to your money can be blocked through the incompetence of a few employees. You are then putting up restrictions under the guise of your safety or protection of funds.

We’ve seen it happen before around the world, so don’t think that you cannot be caught in these traps. The simple fact that banks have these powers means they can use them, be it pressure from internal issues or governments.

Maybe I am being overly dramatic, but it shows how much power they have over my capital versus the power I can excercise over that capital.

In Bitcoin, I have complete control over my funds, and perhaps since I’ve had a taste of what that’s like, it’s pretty hard to look at anything else and not see it as a complete shitshow.

What if I was cut off entirely from the system.

This had me thinking, if I were to be cut from the system and need to operate in the local economy, sure it would be a pain, but it can be done. I have Bitcoin; I can swap some for fiat at a local Bitcoin ATM or use a P2P exchange to trade some of my Bitcoin for fiat.

I am not at the mercy of the banks or governments; I have a fallback plan, failsafe, that works not only in my country but in ANY country in the world.

My conviction to keep sacking.

This silly experience highlights the importance of having capital outside any single system that could be coerced or prove to be a single point of failure. It’s only encouraged me to continue stacking and reduce my exposure to this obvious house of cards that could fall apart at any time. It’s already been proven here in South Africa.

In 2018 VBS Mutual Bank, a local mutual bank, declared themselves insolvent and bankrupt and placed under curatorship. South African citizens and taxpayers were defrauded out of roughly R2 billion, and many customers lost their life savings.

In case you need a reminder, the money in the bank, it’s not your money; it’s a promise to pay, a promise they’ve got plenty of loopholes they can use to avoid paying you.

Fiat money, that’s not your money; you don’t have a say in enforcing the supply rules or validating the issuance of the currency. You are only using it as a method of transacting. Notes can be declared illegal, be recalled or hyperinflated into confetti.

Bitcoin is the only money you can control; that’s your money, and you can say that with conviction.

PrevPreviousWhat Is The Difference Between Dollar Cost Averaging & Saving In Bitcoin?
NextBitcoin Reduces The Need To Become A Professional InvestorNext