Bitcoin Reduces The Need To Become A Professional Investor 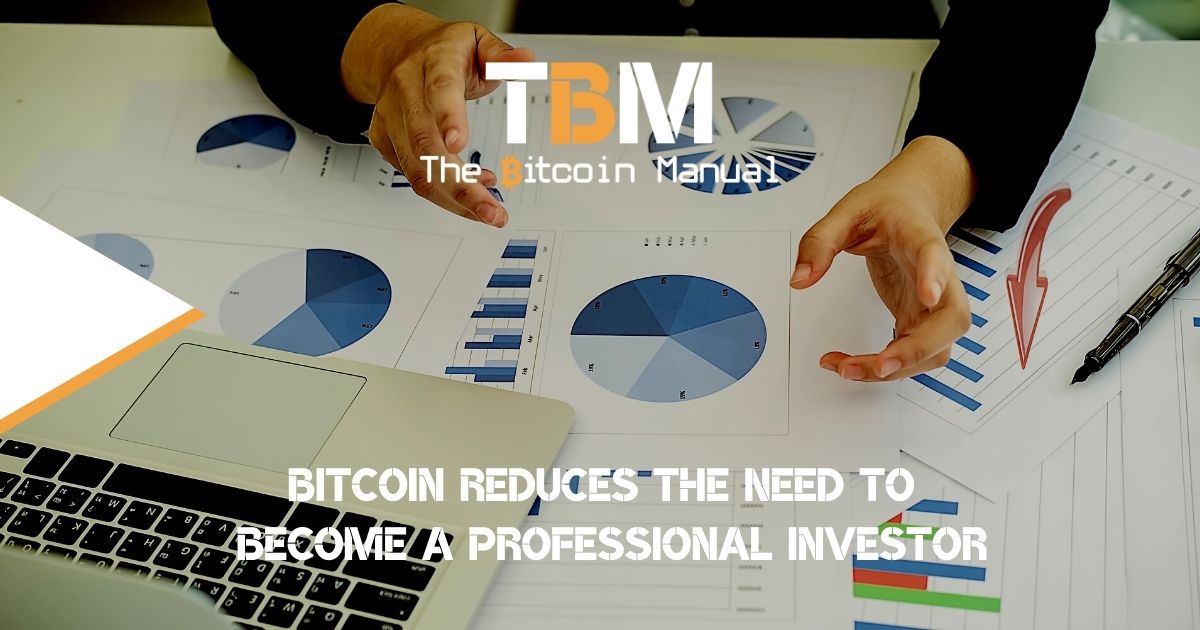 As monetary debasement continues to pick up pace each year, the idea of saving and being a saver has eroded along with it. It makes less and less sense to save these days and makes more sense to consume. When you’re trying to save under higher and higher inflation rates, you lose the opportunity cost that the saved capital was meant to retain.

If you don’t spend it now, you’ll get less when you try to spend it in the future. This constant race to maintain the purchasing power you rightfully earned has caused society to fry. You can see it in nocoiners and normies, the anger, the discontent, the lack of options, the stress, the lack of hope or will to work.

It feels like many have accepted their fate, while others are still pretty cosy as the current debasement rates do not affect them since they had a larger buffer to cushion the blows. Monetary inflation has created a rift that has people acting in ways they would not normally do. All with one aim in mind, survival, as they try to maintain or hold onto a certain standard of living.

Each year it increases, it pulls more people below the poverty line and, with it, a host of social conflicts.

I am taking the time to process the madness.

While I’ve been able to venture down the rabbit hole of monetary history and follow the strings, others have not. They struggle to articulate what they are feeling. However, it manifests in what they do.

I see so many of my normie friends looking for ways to protect their purchasing power, be that through flipping items, purchasing collectables, starting a side hustle, investing in stocks, gambling, sports betting, and of course, the occasional Ponzi scheme.

When saving isn’t an available option, people are forced to look further out the risk curve to try and secure a yield that beats inflation. Eventually, you get to a point where monetary inflation becomes so bad that dog coins can be seen as a viable mechanism for making money.

To an outsider looking in, it may seem like a frenzy. But these people are behaving rationally, but they are acting in poor information. No one taught us about money, and there’s very little time or motivation to learn about money.

We see money as an absolute, when in fact, the measurement tool is relative:

Now, as the number of units outpaces the number of goods and services, we see prices increase. In addition, the creation of new currency units doesn’t get distributed equally. They’re spread through a funnel where a privileged few get to take advantage of it first.

I’ve tried to distil this issue as simply as I can, and if people understood this, they’d grasp the nature of fiat money and why it has failed as money.

Alas, we are stuck with using failing money, and we have to make it work somehow; in some cases, some have taken control, others have given up control, and in both cases, you could still end up losing.

Taking control of your investing isn’t practical for everyone.

Many of us make a living by doing actual work, selling our time, skill and labour for capital. Let’s face it, this is exhausting work, be it physical or mental labour, and time is a finite resource as well as your body’s capacity to utilise the energy you feed it. You can only get so much work out of a person on any given day.

Add to that any other recreational activities or raising a family, and you’re time to manage your money shrinks even more. So, where does the average person have the time to learn about financial markets, let alone keep pace with them?

They simply cannot; it’s a full-time job on its own, and those that work in full financial time make it their job to crush retail suckers like you and me as we try to step into the market. The pros have access to more capital than you, they have access to better financial products, but more importantly, they have more information than you.

Trying to go and compete as a retail trader will see most of you rekt and on the sidewalk. It just looks like a traders market because people don’t share their losses, only their winning trades, so you think that’s the norm, when in fact, it’s far from the truth.

I am not saying trading isn’t a way to make money; I am just saying that most retail traders don’t make any money, let alone beat out the monetary base expansion rate.

You are outsourcing your finance.

So if we cannot enter the markets ourselves or you’re afraid to do it, what’s next? You outsource it to someone else; it could be through investing in passive funds and ETFs or having a managed fund or financial planner handle your allocations. The issue here is interests aren’t always aligned; their interest is managing money and getting fees, your focus is making money.

The upside these institutions make on fees far outweighs what they can actively make in the market, so why would they take on any risk to try and net you a decent yield. They’d have to work pretty hard to do that, and why do that when you can take the low-risk bets and return a nominal increase for your clients and get your fees either way.

Bitcoin is the risk-free rate.

The reasons above are why I think Bitcoin seems so freakishly alien to so many people since we haven’t had an environment conducive to saving for so long. Here comes a technology that rewards prudence, that encourages you to save. Bitcoin’s daily volatility comes from people looking at Bitcoin as another vehicle to trade to try and outpace fiat inflation.

However, Bitcoin hodlers are those that realise that they no longer need to keep up with inflation. They’re beating it by miles and are already reaping the benefits of a unit of account that works with monetary deflation.

Bitcoin allows you to cut through the bullshit of chasing a yield and eliminates the need for all the financial tomfoolery. You now have the security that your purchasing power will be protected and increase reach year.

This leaves you to crack on and focus on being a productive member of society, creating better services and more goods, adding to the deflationary forces we should all be benefitting from already. When you reward people with money, they can trust and verify. They are more likely to put in the effort, be more motivated to take risks, push boundaries and drive innovation.

Bitcoin is savings and is the key to abundance for all who willingly onboard themselves to this new monetary standard. Life gets cheaper for Bitcoin holders each year, and it will continue to get cheaper. I am here to tell you that you don’t need to be a day trader; you can be a daily stacker. Go out, create wealth and then store those rewards in the hardest money run on the most powerful computing network the world has ever seen.