“Yeah But What Actually Is Bitcoin?”

Home » Articles » “Yeah But What Actually Is Bitcoin?” 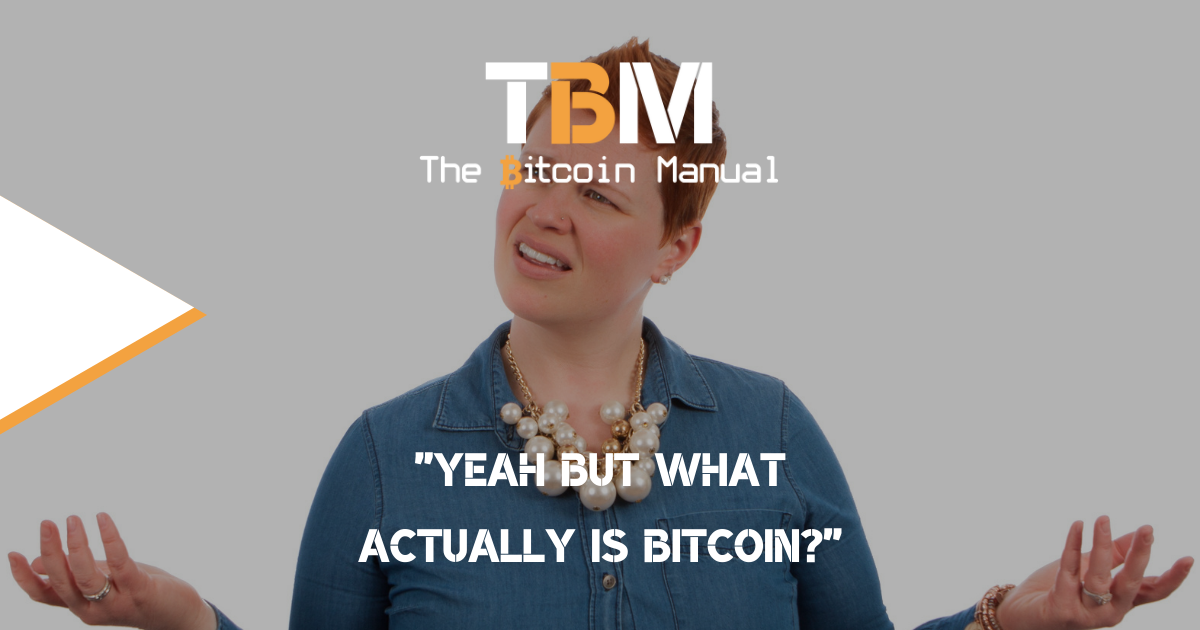 I get this question most often when I speak to friends and colleagues, or whoever messages me when I post about Bitcoin. In fact, even when I’ve tried to describe it in conversation, I got this question back at me a few times.

This is the reason we set up The Bitcoin Manual (TBM) so that we can have a one stop shop that covers all the main points and more for newcomers to come in and learn. There’s no shilling or “bang bang, we’re going to the moon” drivel here. Just two normal blokes sharing our thoughts and experiences of Bitcoin.

Introduced in 2008 by Satoshi Nakamoto, Bitcoin was introduced to the world as a new digital money system that was designed to remove the need for intermediaries or 3rd parties (banks) to send money to one another.

When you give someone some cash in your local currency, it can be considered as peer-to-peer. You don’t need to go through the bank to give someone cash (other than to withdraw from an ATM) and can just hand it over in person.

What if you wanted to settle up tabs with someone from another part of the world though?

One example is right in front of you! TBM is a global project and we have fees to pay to run it.

We didn’t want to settle our outstanding bills in local currencies due to exorbitant bank fees or PayPal fees that would take days or weeks to complete. Let alone asking permission from your bank to send your own money and then justifying the send abroad!

Instead, we used Bitcoin to send money worldwide and final settlement in less than 10 minutes, no 3rd party to go through. In fact, it was even faster because we used the lightning network. It was instant, no problem!

Since 7th September 2021, Bitcoin became legal tender in El Salvador and residents are freely using it to buy goods, with more countries starting to push for its adoption. This is huge for adoption, even those 1.7 billion who are unable to get bank accounts for one reason or another.

Bitcoin doesn’t discriminate and is an open money network to everyone. This is because all you need to use Bitcoin is a Bitcoin wallet (like your normal every day wallet but just for Bitcoin) to send and receive it!

Without getting too technical in this high level overview, you can read up about the technical side of how Bitcoin works here.

There will only ever be 21 million Bitcoins in existence and each Bitcoin is broken down in to 100 million sub units called sats (like pence to a pound or cents to a dollar etc.). There will be no more than this and I find this money system a lot easier to understand than the current “unlimited printing” that’s going on with central banks. Especially when it comes to purchasing power.

What clicked with me the most was seeing the effects of the money printing, which we know as inflation. This increases prices of everything but our relative salaries are not going up at the same rate as things such as houses. In fact, the last 12 months have really accelerated this BS in action with house prices shooting up by 10% in the UK.

Savers are getting shafted with 0% interest rates and so the purchasing power, i.e. what your £ now can buy you, is going down by 10% per year.

This is why I now consider Bitcoin as a new savings account because of the way it works. It’s all about preserving or enhancing your future purchasing power and Bitcoin over the last few years has done just that for me.

As I consider Bitcoin a savings account, I am buying small amounts of it from whatever is left over from my monthly salary each month. Do not be put off by the price of 1 Bitcoin because you can easily by 30,000 sats for £10 at time of blog posting. Over time, this adds up nicely and if you’re comfortable with a 10 year time frame like I am then the short term volatility won’t phase you.

If you’re in the UK, I’m actually able to gift you £10 of Bitcoin without you needing to deposit or buy anything yourself to get you started, thanks to our partnership with Luno’s Bitcoin Pioneer program. To claim it, follow the instructions below:

How Much To Put In?

I say this to everyone I speak to and it’s in disclaimers across the site but I’m not a financial advisor so I can’t advise you on this. Only you know your financial circumstances but what I do is have a spreadsheet (of course).

I calculate how much spare cash I’ll have at the end of the month after outgoings (rent, food, bills etc) and allocate a portion of that spare cash to buy Bitcoin.

Despite me mentioning the “long term play”, I do have a look at price charts and see if there’s any drop in the price so I can perhaps pick up some more sats for the same amount of £.

If you’re just starting, take the time to learn a little bit more about Bitcoin, we have plenty of content and pages here on the site, written by non-technical people and you can start making your own journey in to this new and exciting money!

The Bitcoin rabbit hole is like nothing you will have come across before but it will change the way you think about money as it has done for me. That in itself is worth the effort of learning Bitcoin.