The Importance Of Enforcing The Same Rules For Everyone

Home » Articles » The Importance Of Enforcing The Same Rules For Everyone 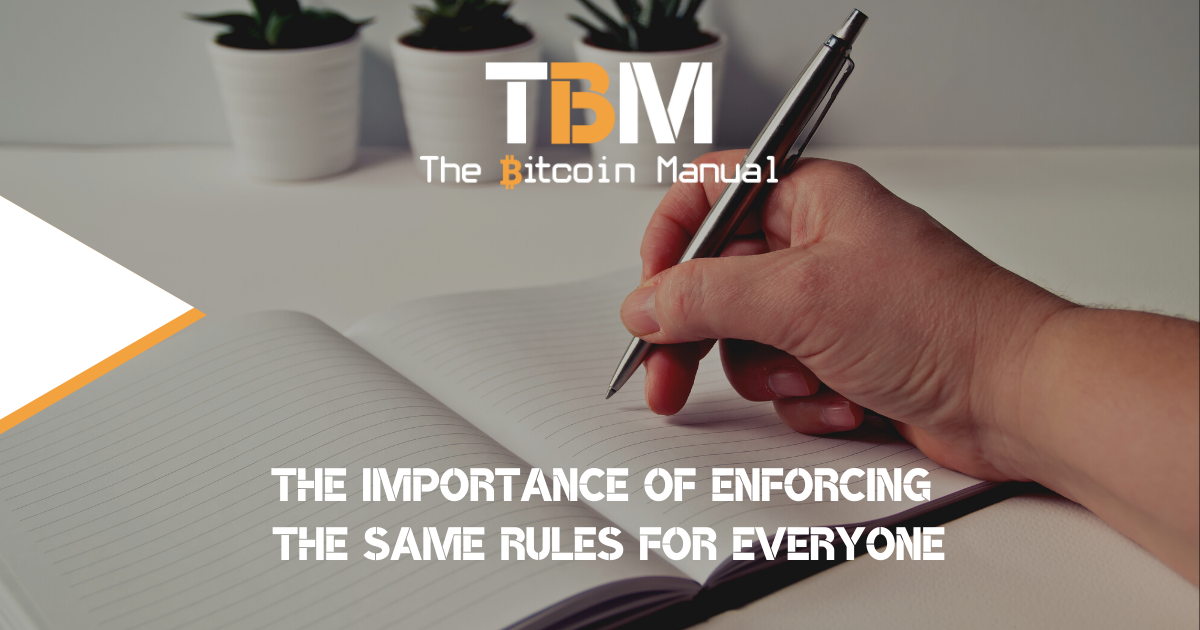 We’re all born in different parts of the world, at different times, with varying sets of skills. The access to energy resources, talent, intellect, and the ability to harness it all would always mean an unequal distribution.

If we add to that the needs of the market and the world is constantly changing, we all have to deal with a range of variables to build a life for ourselves. The world is faced with uncertainty, and the one way we can reduce its effects is by access to resources. The more resources we can accumulate, the less susceptible to the uncertainty we become.

Those resources provide optionality, they may not save us, as resources are nothing but a tool, and it’s still up to us to use them effectively, but having them still makes life a lot easier. Of course, food, shelter and water are our primary concerns, but money would have to be up there with a much-needed resource.

Money allows us to easily barter for the product that comes from the division of labour. When we have money, we can use it to trade for other peoples products or their time. It smoothes out the process and enriches our lives as everyone benefits from voluntary transactions.

Money is a claim on productivity and time.

We use money as a unit of measurement; we measure the time it takes people to complete certain tasks and pay them in a certain currency. We measure the resources required to complete tasks and price them accordingly and add markups to generate profit from our labour.

We use it as a unit of account to record balances of previous claims on production live savings or what we owe others in the form of debt. Money, regardless of how we use it, is a physical or digital representation of societies time and societies output.

Since we all agree via cohesion from the state on the money we use, we effectively give up the accounting function to a central entity. They are responsible for managing the claims on production in their country.

When a government mismanages their currency and continues to inflate the supply of currency units, they increase the number of claims available on a limited amount of production. The more currency units expand, the more units are needed to get someone to part with their time or produce, and we see this manifest in consumer price inflation.

The price of goods and service increase, not only due to the increase in units but as units increase, it alters production and profit calculation. Your previous productivity calculations now make less sense, and you need to adjust increasing your wages or sales to compensate.

Finally, as the currency loses value each year, businesses and individuals see the risk involved in holding currency and therefore require a risk premium for a purchase. When selling your time or a product, you need extra compensation to compensate for the value loss you will have when holding that cash for too long.

This further pushes up pricing and puts pressure on wages, and eats into people’s savings and later their standard of living.

We are storing value in anything but currency.

When you can no longer trust your currency to hold value, you are forced out the risk curve to try and mind better returns to compensate you for the losses of inflation. As people look for shelters from inflation, they are willing to bid up assets with a monetary premium beating inflation.

We see this in the price of real estate, stocks, bonds, cryptocurrency and, of course, Bitcoin. When the dislocation of value from fiat becomes apparent, governments are meant to attract value back into their currency by offering higher interest rates.

However, with the debt obligations we see around the world today, higher interest rates would cause massive defaults. So governments have reached a point where they have no choice. They have to continue to erode the value of their currencies.

We have no assurance of the debasement rate of any of these assets; all we know is that it’s slower than that of fiat and many investors are happy to make that trade-off.

Why have money with a rigid set of rules?

Bitcoin, however, we know there will only be 21 million; we know over 17 million coins are already in circulation. We know the issuance rate of the coins, and we know it will remain like that until the halving. Bitcoin offers you security every step of the way to make financial calculations for the future.

Bitcoin is the first constant in a world of ever-changing variables, and because it’s constant, the variations of the world are placed on it and why we see such volatility. As people hear about it and realise what it can offer them, they are placing value into the protocal. In contrast, others extract value when they think it’s economically beneficial for them.

It’s the first time any of us worldwide can have access to an open network where no one can change the rules. We’ve been living in a world where governments debase their currencies at different rates to remain competitive. You are forced to use the currency but have no say in how it is managed, but Bitcoin flips this on its head. You can enforce the rules, and you can manage the currency yourself.

There are no governments taking off tax and inflation and no banks sucking up fees through their rent-seeking networks.

You are in complete control over your money.

We are weeding out the week hands.

Bitcoin is a voluntary network, you opt-in by choice; if you don’t like the rules which everyone agrees to, then you can leave. You sell your Bitcoin and move to an asset class you prefer. If you prefer to play in a world where people can change the rules, others can get selective access or can marginalise your access, then so be it.

That is your choice, but I think that in a world where every other asset encourages changing the rules for some and offering special favours, it eventually pushes people to the network with the most consistent and most rigid enforcement of the rules.

Someone mentioned to me recently they feel it’s unfair that others got in early or that large companies like MicroStrategy can buy thousands of Bitcoin. To which I’m afraid I have to disagree, we are coming from a monetary system of inequality, so there are bound to be those who accept the early-stage risk and invest. Yet regardless of how early you get into Bitcoin, everyone played by the same rules you either compete in the Bitcoin mining pool or the fiat mining pool.

If there is a monetary system that offers more of a fair chance for both humans now and those in the future, then I have yet to see it.

Why does an even playing field matter?

When we all have to play by the same rules, it eliminates the ability to financialise the economy and use accounting gimmicks to edge out the competition. It limits the ability for others to exploit relationships to access capital and resources financial apartheid.

When the money is sound, we are forced to compete in the marketplace of products, ideas, labour and skill. The focus is then taken off the accounting method and focuses on the production of more goods and services.

When effort is focused on growing the goods and services to attract Bitcoin from other market actors, we drive deflation and actively distribute abundance across all uses in the Bitcoin network hodling wealth in satoshis.

I, for one, welcome the even playing field, and with the confidence of no gerrymandering of the monetary stock we all compete for, I am more ambitious than ever to produce value that will help me acquire more sats.

South African bitcoin pleb falling down the rabbit hole and willing to share every bump, scratch and knock along the way
View more articles from this author
PrevPreviousWhat Is The Difference Between A Single Sig & MultiSig Wallet
NextWhy You Should Keep Spare Cash On Hand As A BitcoinerNext