How Is The Bitcoin Price Determined?

Home » Articles » How Is The Bitcoin Price Determined? 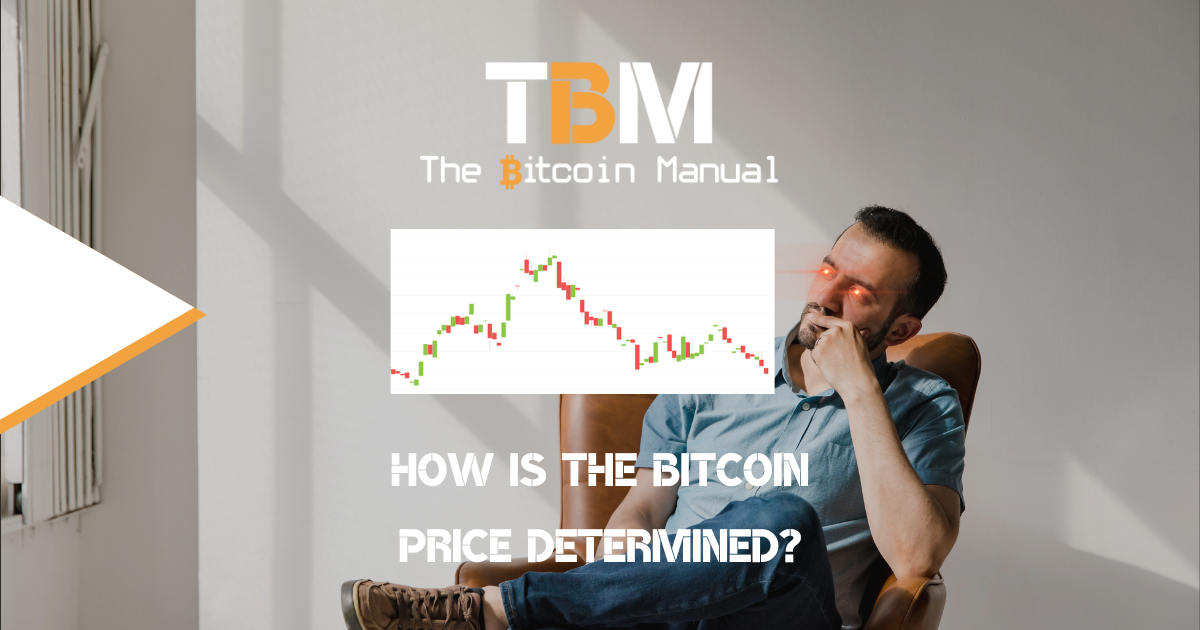 I’ve been asked many variations of this question in recent times, usually from those who are still sitting on the sidelines with Bitcoin and are trying to apply normie ways of thinking to it.

“How can something that isn’t “tangible” be valued in the tens of thousands?”

The hardened Bitcoiners who have been around for a while, studying Bitcoin and understanding how it works will tell you not to look at the fiat price as we’re heading towards hyperbitcoinization.

However, when you’re looking for a good deal across the many exchanges that allow you to buy Bitcoin, you may notice variations in price across different exchanges.

Why is this though? Surely they should all be the same price? Let’s have a cheeky high level look at how markets work.

In a nutshell, supply and demand is pretty much what drives the price of things in a given market.

Consider a simple example where you want to buy something from your local supermarket, supply has been freshly stocked and the demand is low. This would usually be where there’s a lower price offer on due to having too much supply and the supermarket is trying to get rid of it.

Conversely, when people are panic buying (here’s looking at you toilet paper hoarders), the supply becomes very low when demand is very high. Therefore the price of that item is increased at a premium due to there being limited supply.

With Bitcoin, it’s supply will never be changed and is always capped at 21 million coins, no matter the demand, so you have one side of the equation completely fixed for the first time ever… in theory.

The Bitcoin halving adds something many in the scene refer to as a “supply shock”, due to the fact that the rate at which new supply hits the network gets cut in half every 210,000 blocks (or approximately every 4 years).

Even though the total amount of Bitcoin to be produced is known, the last coin won’t be “minted” until 2140 with Bitcoin’s inflation schedule being set in stone so we know what to expect with it.

However, during this time, the supplies of Bitcoin on various exchanges will fluctuate as people withdraw to cold storage or deposit Bitcoin to exchanges to sell for whatever reason, which impacts the price as discussed a little later.

Despite all this information being publicly available about Bitcoin, ultimately, it still comes down to buyers and sellers of Bitcoin back in to dirty fiat, or worse, a shitcoin.

The price at which these two entities decide to buy or sell their Bitcoin at will determine the market price of it.

So if someone wants to buy Bitcoin (or sats) at $40,000, then that will generally make the price of Bitcoin $40,000 across the exchanges and places where it is readily tradeable. Although different exchanges may have variations in prices – more on this later.

There will be people who just buy it at whatever price on the market instantly, known as “spot” price. There are those who set buy orders up that won’t trigger until a certain price is reached, therefore they just wait until then.

This constantly shifting dynamic between buyers and sellers ultimately determines the price as order books (where people set up their buy and sell orders for Bitcoin on exchanges) are continuously evolving.

Some of the more risky tactics that degen players like to use involve leverage and this can trigger sudden price movements that we see quite often in the space as whales come out to play.

The final piece of the puzzle though is that different exchanges report different prices at any given time, which is due to a few factors.

One of those is the “liquidity” (supply of Bitcoin) or how much trading volume there is on an exchange. If there’s low liquidity, there aren’t as many people using the exchange and so there’s not as much Bitcoin available there either.

This means that there’s less supply on the lower volume exchanges and prices can really move a lot more due to there being less buy orders for sellers to sell in to and vice versa.

Another factor is that there’s actually no standard way for exchanges, or even people, to price Bitcoin so no-one really knows what Bitcoin is meant to cost in fiat terms. The fiat price is pretty much decided by the buyers and sellers mentioned above or traders.

The final factor is due to the difficulty and inefficiency of moving fiat or Bitcoin from one exchange to another. This difficulty is due to withdrawal fees and the dangers of sending Bitcoin to the wrong address so it makes it harder for the would-be traders to arbitrage these price differences across different exchanges.

As fiat price is the topic that most newcomers focus on and it’s very easy to get sucked in to the rollercoaster that many “influencers” and “price analysts” would lead you down.

However, for someone who has a long term HODL goal, getting as many sats as I can when the price drops is the name of the game.

There are so many macro factors at play with what goes on in the price, especially as Bitcoin’s price action tends to follow the stock market as Wall Street treats it like a high risk stock, when it’s not!

For me, keeping some dry powder back to take advantage of moments like what we’re seeing now as the fiat price capitulates is paramount.

So yes, keeping an eye on the price is one thing but it’s not the only thing and knowing how to get a good deal, setting buy orders, understanding order books, being patient and not getting involved with leverage is a foundation that any HODLer should have.

If you crack that, your sats pile will grow and your future self will thank you when the bull market hopefully returns!

British bitcoin pleb falling down the rabbit hole and willing to share every bump, scratch and knock along the way
View more articles from this author
PrevPreviousWhat Is Bitcoin Leverage Trading?
NextWhat Happens To Your Bitcoin When You Die?Next