The Dangers Of Holding Wrapped Bitcoin 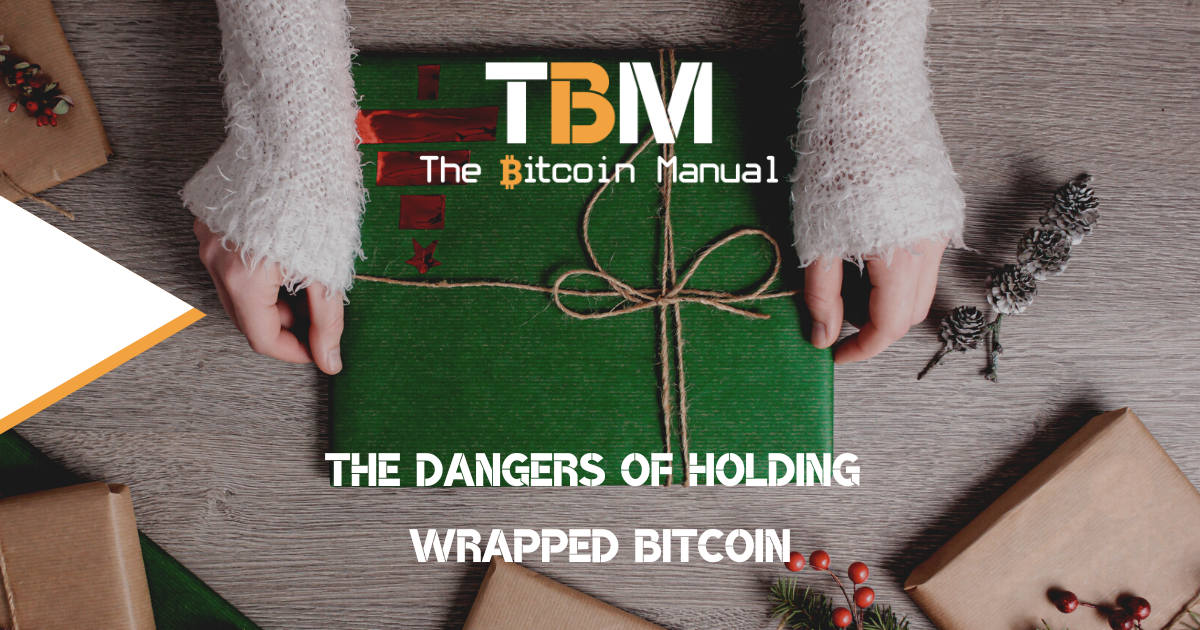 The emergence of so-called decentralised finance (DeFi) has promised endless opportunities, financial inclusion and access to institutional-grade financial products but one problem with DeFi is the lack of a pristine asset. The incompatibility of using bitcoin on other chains where DeFi limits the growth, the use and the value that can be attracted into those ecosystems. Instead of building products and services on top of bitcoin and being subject to bitcoins rigid and known monetary policy, DeFi wants to keep its own problematic tokenomics, but leverage the brand and value of bitcoin.

This is where Wrapped Bitcoin (WBTC) comes in. The basic idea is to develop a digital currency representing bitcoin on other blockchains where bitcoin (BTC) is not the native asset.

The history of wrapped bitcoin

The first iteration of wrapped bitcoin launched in January 2019; the first wBTC protocol was launched to bring bitcoin-backed tokens and liquidity to the Ethereum network along with the flexibility of an ERC-20 token.

The value of the wBTC is meant to be the same as the original bitcoin, either through the help of a smart contract and oracle or through a centralised custodian that manages the minting and redemption of the token.

In plain words, a BTC holder can sign over ownership of their bitcoin through smart contracts or custodians and connect their wallet to a DeFi platform to receive a token representing that bitcoin on another chain. You can then use that token to participate in DeFi, such as liquidity pools, taking out loans and trading bitcoin on permissionless exchanges.

How do wrapped Bitcoin tokens work?

When the reverse happens, the user sends the wBTC that needs to be converted back to the custodian and then redeems the real BTC to an on-chain address, the ERC-20 BTC token is burned (destroyed), and the locked BTC on Bitcoin is released.

The minting and burning of tokens are tracked and verifiable on the blockchain and possible to view the complete order book of wBTC or other versions of it. Depending on the protocol or organisation behind them, wanBTC, renBTC, sBTC, WBTC, tBTC are all examples of ERC20-based BTC tokens minted on Ethereum, while others exist on different blockchains.

Is a wrapped token fundamentally the same as the original?

The short answer is absolutely not.

wBTC should not be considered a fundamental equivalent to BTC. This common misconception is why many lose money in liquidation crisis events. In the analogy, the value of the briefcase IOU depends on three things:

From a technical perspective, a wrapped Bitcoin token is not safe. It will likely be in the custody of a centralised platform like Ethereum or Binance Smart Chain. Once converted into an ERC-20 or BEP-20 token, it will hold the security of the related network, which has a much weaker consensus mechanism than bitcoin.

One of the significant flaws in wrapped BTC tokens is the need to trust the custodian that holds the underlying asset. If the custodian unlocks and releases the real Bitcoin to someone else, token holders of the ERC-20 compatible wrapped BTC would be left with a worthless asset.

The way Bitcoin is held determines the level of security provided. A centralised custodial bridge that holds Bitcoin is an organisation that promises to mint ERC-20 tokens on Ethereum, for example. The centralised entity must be trusted that they will hold the BTC and not run away with it.

The alternative to a custodian is using a smart-contract-managed bridge. Instead of trusting a third party, only trust the code of immutable time-stamped smart contracts. However, smart contracts can be exploited, especially when dealing with assets not native to them. The security of wrapped BTC bridges (cross-chain connections) has represented a heated argument across the DeFi community as there are cases where breaches can cause double spending and that is why custodians must be relied upon for keeping the real BTC locked.

What are the disadvantages of wrapped assets?

There is only one largely recognised disadvantage of wrapped assets. The trustworthiness of many of the coins offered in exchange for wrapped versions is questionable. The issued tokens are sensitive to centralisation because they depend on the platform or smart contract that issues them, creating a central point of failure or attack. Since decisions about wrapped assets are thus made centrally, there is a risk of market consumption and possible biased abuse of power.

Another issue with porting bitcoin to a chain that is not its native ecosystem is that the protocols for wrapping assets tokens are Turing-complete while bitcoin is not. In other words, wrapping cannot be automated via a smart contract on these so-called smart blockchains. Instead, the wrapping is usually done instantaneously via a central program, which is therefore open for manipulation.

As the minting process for wrapped cryptocurrency is similar to centralised bank lending, users have to trust that custodians won’t run away with their bitcoins. This defeats the purpose of a decentralised system, which is the raison d’être behind crypto. If the custodian goes broke, you won’t be able to convert your wBTC token to claim the bitcoin that it was backed by, and there could be bank runs, leaving those who can convert on a first-come, first-serve basis.

As people panic to draw out the last bits of liquidity, people are willing to trade their wrapped assets well below par to extract some value before there is nothing left to redeem. If the custodian that is responsible for managing the peg goes down, your IOU is rendered worthless, regardless of the value it’s meant to represent.

The market-contagion risk of wrapped tokens

A crypto market contagion is a financial crisis spreading from one protocol or crypto sector to another. Contagion tends to unfold due to risk and leverage building up in the system and is most likely when participants distribute credit risks across institutions and markets.

In the case of wrapped bitcoin, increased capital efficiency also comes with an increased risk of contagion. For example, if one protocol managing collateral vaults fails, every other application using their wrapped token or ‘IOU briefcase’ is exposed to a potential liquidity crisis.

This type of credit contagion has happened multiple times throughout the crypto cycles, and despite being backed by bitcoin, there can be collateral failures.

When you leave the safety and assurances of the bitcoin base chain, you are always going to introduce risk and trust assumptions. Despite the branding wrapped bitcoin is not bitcoin; it’s a token, a token like any other that comes with inherent risk. wBTC requires a certain level of trust on the holder’s part. Users must trust developers to write code correctly, custodians to manage their treasury, and oracles to maintain the correct price feeds and for that external chain to remain in operation.

Wrapping and unwrapping or bridging require smart contracts that have no way of enforcing rules on the bitcoin chain, so there is no permissionless way to guarantee the return or convertibility of your funds back into real bitcoin. While holding a wrapped asset should entitle the holder to a 1:1 ratio of the native asset, the actual conversion is entirely up to the custodian or contract that has provided the wrapped asset, which could be subject to legal and government pressures.

In addition, when moving funds on another chain, you need to hold that chain’s native asset and pay the fees on that chain, which can be far more expensive than using the bitcoin base layer or its layer two solutions.

If wrapped bitcoin is your only on-ramp into bitcoin, you should consider the risks mentioned above and if you are not comfortable with these risks, consider swapping it for on-chain bitcoin and taking self-custody of your funds.

Getting wrapped up in other chains

PrevPreviousWhat Is The Bitcoin Float?
NextWhat Is A Green Bitcoin Miner?Next