Bitcoin Is For The Rich & Middle-Class Not The Poor, Yet

Home » Articles » Bitcoin Is For The Rich & Middle-Class Not The Poor, Yet 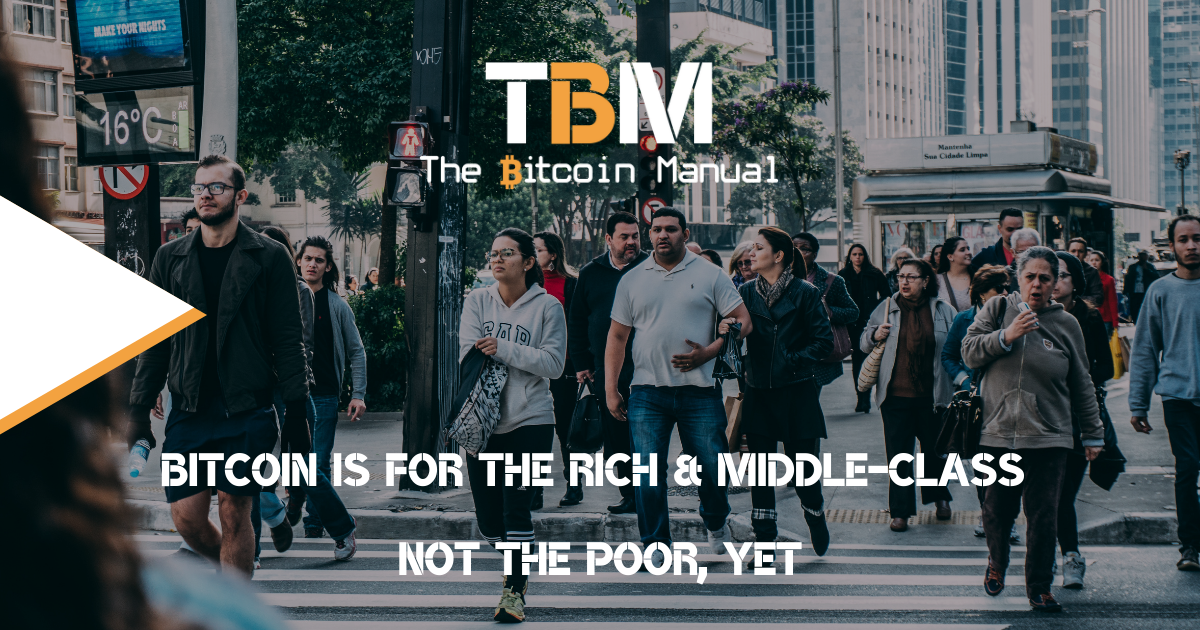 Each day I stack Bitcoin, I also make it my priority to learn more about it. I never stop consuming Bitcoin content because I never want to be caught off-guard. As I understand, I am also able to make better cases for why I store my wealth in Bitcoin and can help answer other peoples questions.

I am sure; as a Bitcoiner, you’ve tried to orange pill some of your friends. I can’t speak for others, but my conversion rate for orange pilling someone has not been that great; I’ve yet to create a fully-fledged pleb that DCA’s, but I have gotten a few to take a bit of Bitcoin.

Planting the seeds or orange pilling.

During my orange pilling journey, I’ve come up against plenty of resistance and misunderstandings about Bitcoin. I always find it funny how people will object to Bitcoin but won’t apply that same critical thinking to other asset classes like stocks or real estate when I hear them critique Bitcoin with the same points applied to different asset classes.

I immediately realise they are not actively thinking but actively parroting from their prefered mainstream media cloud server provider of cookie-cutter thoughts.

One objection I get constantly is that Bitcoin is for the rich and not for poor people. I find this hilarious since I am poor and am stacking Bitcoin, but the whole idea is that you need to get in early or have an entire coin to benefit from Bitcoin.

The fiat mindset is a tough one to break, and coupling that with unit bias means people gravitate to things perceived as “cheaper” by unit price. They’d instead hold one of these shitcoins that are knock offs of Bitcoin instead. The idea of having 10, 100, 1000, 10 000 of a shitcoin is more appealing than having a fraction of a Bitcoin.

I quickly dismissed this as the usual shitcoiner babel, greed fest, and laziness at not willing to learn and do research. Trying to reason with shitcoiners is a waste of energy and isn’t worth the return; they’ll come back to Bitcoin eventually, so why bother?

But then, one of my friends who weren’t into shitcoining legitimately asked how they could benefit from buying Bitcoin based on their current income and financial situation, and I had to give it a more profound think.

I am not rich by any stretch of the imagination, but I am fortunate enough to have had a regular income for most of my working years, and I could live within my means and save. In a sense, I am privileged enough to have spare productivity to save each month, cover my expenses and store in Bitcoin for the long run.

While I think Bitcoin is for everyone, I can’t be naive about the realities many people find themselves in today within the fiat system.

Some of us cannot kick off free cash flows at the end of the month or not enough to drive change, saving a few bucks here and there. Sure, you can put it into Bitcoin and benefit from number go up, but at today’s fees and rates, micro-purchases for Bitcoin aren’t exactly going to get you as far as many would feel would be worth the effort.

Getting out of the fiat debt trap or the inflation rat race to have spare capital is a privilege many of us will never be able to make as they live paycheque to paycheque, so how would Bitcoin benefit these people?

They have to use their capital immediately to make it to the next day, so in theory, Bitcoin will not work for them.

Bitcoin is a savings technology, but that doesn’t mean it will do all the hard for you. You still need to have the discipline and make the consistent effort to save every bit you can spare for your future self.

Some of us have free cash flow at the end of each month but see this as leftover money to spoil ourselves now, which is a fiat driven mindset.

Kicking that habit is tough.

If you do not already have a culture and a habit of saving, Bitcoin isn’t going to change that for you. If you’re always keen on deploying capital on consumer goods and treats when you have spare cash, it doesn’t matter if you’re saving in fiat or Bitcoin. You’re still making a fundamental error that will see you get the full effects of Bitcoins NGU technology.

Very few fiat savers are looking to save for the long term and are willing to contribute regardless of price fluctuations consistently. They are used to seeing a stable increase in the nominal figure they see on the screen and tie to purchasing power in the real world. It’s not easy to see your savings cut by 20, 30, 50% in a single week, and if you have limited capacity to save, this is a harder pill to swallow.

In theory, Bitcoin won’t work for people who have never learned the habit or seen the benefits of saving long term.

So how will poorer people benefit from Bitcoin?

At the moment, I think this comes as Bitcoin finally leaves its embryonic stage of a stubborn minority and becomes a world reserve asset. As more people benefit from the purchasing power increases from their Bitcoin position, they are going to be more likely to cash that in for goods and services.

This is where I think those on the poorer end of the spectrum can benefit; as these Bitcoin holders begin to spend their newfound wealth, they disperse the coins not based on fiat to Bitcoin but on productivity to Bitcoin.

When you are someone who didn’t have the best time under the fiat standard, you still have the ability to produce and exchange your labour for Bitcoin. Something we actively see in places like El Salvador as they roll out the currency as a legal tender, which is still an experiment at this point, and it remains to be seen how it will affect productivity in the country.

Additionally, investment funds and companies will have to come on board and thus indirectly expose those who have pensions and savings with these companies to the upside of Bitcoin.

Both of these are more significant macro trends that will take years, or even decades, to play out, so why waste time sitting on your arse waiting for these slow-moving institutions to get you involved.

Sure it will be deemed a “safer” product by then, but It doesn’t mean you should sit around and wait for Bitcoin to become monetised on such a scale. You can still secure a sizable piece of the asset class today for a few dollars worth. We are still very early, with plenty of room for growth as more people, institutions, and governments feel the need to tap into and leverage the Bitcoin network and Bitcoin the asset.