What Are Atomic Multi-path Payments (AMP)? 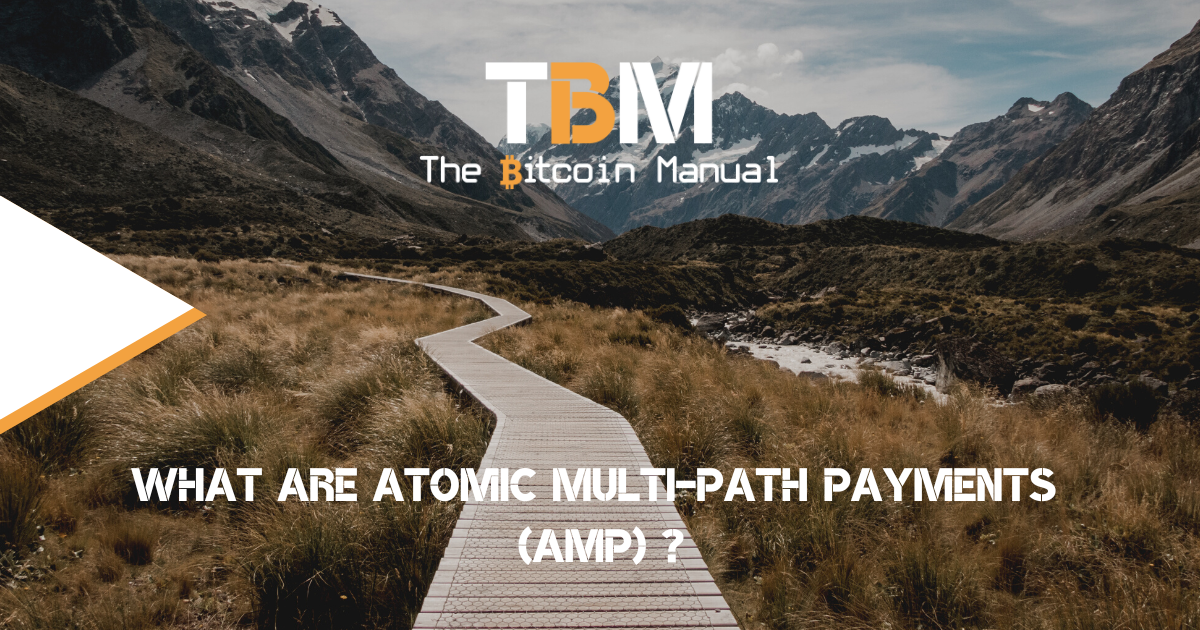 Building a payment network on top of the bitcoin base chain that has the potential to scale and route millions of payments in a private and decentralised manner is no easy feat. The Lightning Network has made considerable ground as a micro-payment service. Still, if it’s going to scale and meet the growing demand for payments, even with a lack of liquidity, it needs to become a more dynamic system.

Bitcoin is a savings technology, and most people are keen on holding their funds in cold storage, where Lightning requires you to keep your funds hot to use it; that means you’re putting funds at risk, and very few people want to risk large amounts of bitcoin. The Lightning network will attract more capital if the reward to do so is there; with time, as it proves stable and more reliable, more bitcoin holders will be confident enough to use it regularly.

Think of channels like money tubes; they can all accommodate different size payments; if the tubes available aren’t large enough, the payments will fail. When routing a payment, you may run into issues with liquidity in channels, and to solve this, a concept called multi-path payments comes into play.

These multi-path payments provide the ability for the Lightning network to split up payments between available channels and re-assemble them in the receiver’s wallet.

When referring to multipath payment (MPP) as part of the Lightning network, this is used as a general term, as there is no real standard yet. The concept of MPP is not fully implemented on the Lightning Network. Still, there do exist different proposals and implementations of this concept across the different Lightning implementations, including Basic MPP and Atomic Multipath Payments (AMP).

These different versions attempt to solve several security and reliability issues with the basic concept of multipath payments, and each has its trade-offs.

What are Atomic Multipath Payments?

Atomic Multipath Payments (AMPs), sometimes called Original AMP or OG AMP, would allow a spender to pay multiple hashes derived from the same preimage—a preimage the receiver can only reconstruct if they receive a sufficient number of shares.

Unlike Simplified Multipath Payments (SMP), this only allows the receiver to accept payment if they receive all of the individual parts. Each share using a different hash adds privacy by preventing the separate payments from being automatically correlated with each other by a third party.

The proposal’s downside is that the spender selects all the preimages, so knowledge of the preimage doesn’t provide cryptographic proof that they paid the receiver.

Both AMP and SMP allow splitting higher value HTLCs into multiple lower value HTLCs that are more likely to succeed individually, so a spender with sufficient liquidity can use almost all of their funds at once no matter how many channels those funds are split across.

In a simple example, consider making a large payment on the Lightning network that may fail as very few people have a channel the size of a full bitcoin, and very few ever will in the future as coins are dispersed. If you could only send bitcoin via channels of that size, it would start to centralise Lightning with custodians, defeating the purpose of decentralisation.

In the example below, Alice has one bitcoin locked in Lightning and needs to pay Bob 1 bitcoin, but they do not have a direct channel, so she has to route the payment through multiple channels.

Alice opens a channel with Bob.

Alice pays 0.5 BTC to Bob by splitting the payment

If there were no 0.5 BTC channels available, in theory, Alice’s wallet could then look for four channels with 0.25 BTC and route four payments across four channels to Bob’s wallet.

What are the benefits of AMP?

There are multiple benefits of Atomic Multi-Path Payments of the lightning network. Some of these are:

If you’d like to learn more about AMP and how it can be implemented on Lightning, and what it means for users and lightning-enabled apps, then we recommend you check out the following resources as part of your research.

South African bitcoin pleb falling down the rabbit hole and willing to share every bump, scratch and knock along the way
View more articles from this author
PrevPreviousWhat Is LN Bank?
NextWhat Are Simplified Multipath Payments?Next