Why Bitcoin Dominance Is A Marketing Gimmick

Home » Articles » Why Bitcoin Dominance Is A Marketing Gimmick 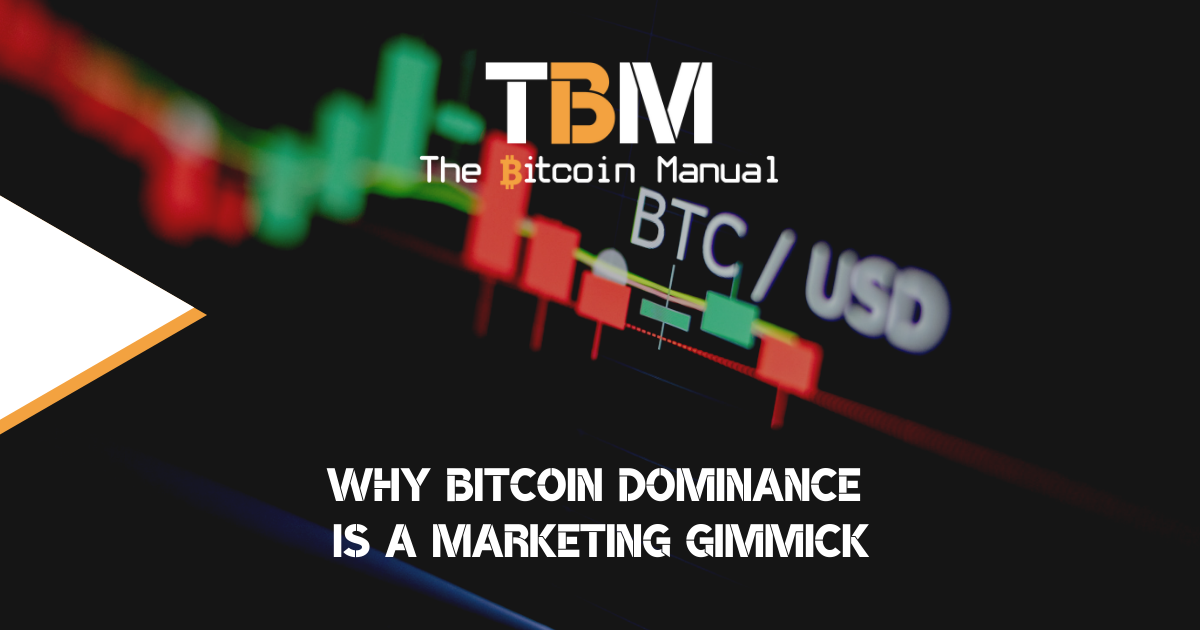 The longer I remain in the Bitcoin space, the more I feel the altcoin space is designed to divert you from Bitcoin. The goal is to keep as many people locked in the shitcoin pool as long enough. The more people stuck in the shitcoin pool, the more time more prominent investors can accumulate Bitcoin. Additionally, when you give up fiat or, worse, your Bitcoin for their shitcoin, you effectively help them build their position.

They will try to make arguments regarding energy use; they will claim superiority in cost or speed; honestly, it doesn’t matter. The fact is, it’s an inferior product trying to compete with Bitcoin. When you cannot beat your competitor on merit, you only have narrative and market sentiment, which is why so much money is focused on altcoin marketing versus actual altcoin development.

There are plenty of gimmicks shitcoiners use to try and discredit Bitcoin, and we can do them one by one.

I probably will at a later stage.

But I’ll focus on debunking one today; it is a generalised statistic quoted by mainstream media and altcoin PR puff pieces, and that is the concept of the Bitcoin dominance chart.

What is Bitcoin dominance?

Bitcoin is the world’s largest digital asset market in the world and commands the largest portion of the trading volume as well as market cap measured in US dollar terms (or fiat terms). Since Bitcoin is compared or grouped with other digital-only assets, a popular metric for measuring the sector is grouping all these tokens and Bitcoin together in one overall market cap.

The summative market capitalisations of all the existing cryptocurrencies in fiat terms are grouped, and we arrive at a total market cap valuation for the entire cryptocurrency space.

Then the US dollar or fiat value of the total cap is divided by Bitcoins total cap, and we get the Bitcoin dominance. The ratio between the market cap of Bitcoin to the rest of the cryptocurrency markets.

For many years, while Bitcoin was far and away from the largest cryptocurrency – and one of the few in existence as more tokens are created it dilutes the dominance of Bitcoin when using this metric.

So you can see how this figure can be manipulated, especially with the ease in creating tokens on chains these days and establishing a market.

Although Bitcoin dominance is an interesting statistic to look at, one should keep in mind that it does not reflect its real value. It is also worth noting that a market cap does not mean an influx of money. It is just a measurement based on the circulating supply and current market price.

During the times when Bitcoin continues to rise and bring in more capital, known as bull runs, we will often see more tokens created to try and piggyback off of Bitcoins growth.

Often altcoin proponents will quote this metric as Bitcoins failure and the growth of the altcoin market, when it is anything but, with several nuances, they fail to mention.

What is the Bitcoin dominance metric today?

If we look at Bitcoin dominance on the two most popular cryptocurrency aggregators today, we get the following stats.

So why the discrepancy in percentages?

We have to remember; these crypto aggregator sites live on, attracting more traffic to the site. To attract more visitors, they need to list more coins, and it’s a race to the bottom. The website that lists the most shitcoins will naturally get a more significant share of the traffic.

The more shitcoins you can list, the more market caps are added to the altcoin side to dilute the Bitcoin side of the ratio.

If we consider this business model, then these aggregator tools have a vested interest in reducing Bitcoin dominance charts as they list more tokens.

Now that we have established that there is dilution in this metric, we need to start to actively remove the gross offenders. The first one is the stable coin market, as this is firstly not a cryptocurrency asset; these are simply digital representations of fiat currency; this could be backed 1-1, particularly or algorithmically with another asset.

Since we know that fiat can be created without much effort and the supply is infinite, so too is the ability to dilute the dominance figure.

If we look at the stable coin market, in total, it’s around:

If we remove these values from the overall calculation, Bitcoins market cap rises to:

Now we can start to see how they suppress Bitcoin’s real dominance, but it doesn’t stop there, oh, not by a long shot.

The proof of work market.

If we accept that any coin that is created without the backing of proof of work is essentially held up by Bitcoin trading pairs or stable coin trading pairs, then it has no base value. Its value is held up by its ability to be traded for other assets and has no cost to production, like fiat.

The vast majority of tokens would fall under this category since they are tokenised securities on another chain that backs it with proof of work, for example, ERC-20 tokens on Ethereum.

So these, to me, aren’t real markets and should not be compared to bitcoin, and instead, only coins that actually cost electricity to produce and use a proof of work method can be counted with Bitcoin.

Now, if we use that to compare Bitcoins dominance, we get a figure of

The incentive to misdirect you is high.

I am not stating that these data services are acting in a malicious factor to misguide you, but the incentive is definitely there. The more coins they list, the more they reduce the market cap, the more the altcoin market looks like it’s growing and is seen as a favourable place to put your money.

The more traffic and investment altcoins get from these sites, the more money they will spend with them, and so it creates a feedback loop to continue to expand the altcoin market without offering any value.

It’s all about creating new tokens that can dilute the market, which is ironic because currency inflation and debasement is the plague bitcoin is actively trying to fight against with fiat debasement.

Getting into an unregulated space where money is on the line, you need to carefully tread when you read articles and listen to opinions as well as stats. Unless you can verify everything that goes into a calculation, you should be careful about the things you quote or consider when making your investment decisions.

South African bitcoin pleb falling down the rabbit hole and willing to share every bump, scratch and knock along the way
View more articles from this author
PrevPreviousDon’t Be Fooled By DEFI Interest Rates
NextWhat Meme Coins Can Tell Us About CryptocurrencyNext