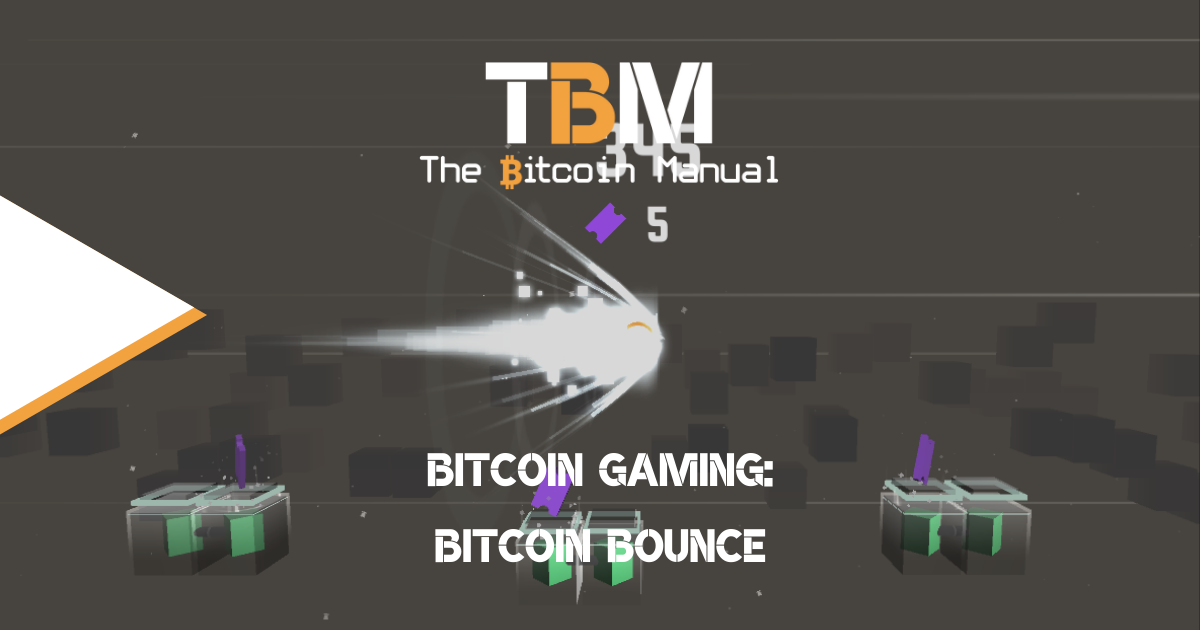 Ah gaming, one of my favourite past times. Some would say that spending so much time in my youth on it was “misspent”. I’d argue that it helped develop my logical thinking skills along with several other health benefits personally but to each their own!

However, with developments set to continue on Bitcoin’s lightning network, we are starting to see more games being built that aim to bring another benefit.

That is of course, putting more sats in the hands of the masses, one gamer at a time!

We have curated a list of Bitcoin games that are currently out there on our dedicated page should you wish to explore but today, I’ll be diving in to Bitcoin Bounce.

I recently covered one of THNDR Games creations called “THNDR Bay” but they are swiftly developing a suite of mobile games integrating Bitcoin.

Along with TBM, they want to bring Bitcoin to the masses and have chosen mobile games as a means to do that. Bitcoin Bounce is the first game they created in January 2020 and I’ve been getting to grips with it this past week.

What Is Bitcoin Bounce?

The concept of the game is very simple. Your aim is to keep the Bitcoin ball bouncing for as long as possible across various blocks as you move forward, effectively mimicking a blockchain!

Along the way, there are traps such as chasms (or missed blocks if you will) and spikes, power-ups to help you on your way and raffle tickets that you can collect which put you into a daily draw for a chance to win some sats.

As the screenshot above shows, there are blocks you need to bounce the Bitcoin ball on by tapping the screen. Some blocks are lit up which you need to try to land on and you can build up your score quickly if you can land on these in successive bounces called a combo.

The colour scheme changes as you go through the course and get your combination streak going which is a great touch. When you get to a combination of 20, the screen goes a dark red colour and the ball speeds up with each combo bounce, adding to the intensity of the game.

I also found that the graphics are smooth and fast loading with instant responsiveness to tapping the screen.

THNDR Games occasionally run tournaments where you can compete against the developers of the game for an additional chance to win sats.

How Can THNDR Games Reward Users With Bitcoin?

With Bitcoin Bounce, there are in-game adverts that help fund development of the game which pop up after every 3 or 4 attempts. As with all ads, they can be annoying but I didn’t find them obtrusive. Actually, it was good to let the heart rate calm down a bit before the next bout!

You do have the option to watch an ad if you wanted to continue your current bounce session and try to set a new personal best but you can only do this once.

How To Withdraw Sats From Bitcoin Bounce

If lady luck has shone down and granted you some sats from the raffle, you have a couple of days to claim the prize, otherwise it will go back in to the pool. Further information on the terms and conditions can be found in the app.

Tap on the lightning bolt icon on the right side on the home screen, then tap the Bitcoin logo on the right. You will see “Your Prizes” and the amount of sats with an option to withdraw. Tap this button to open your lightning wallet on your smartphone and then you will receive your sats instantly.

Please note, you won’t get rich playing Bitcoin Bounce so don’t get any ideas of quitting your day job yet!

The team have to be commended on taking a really simple concept and turning it in to a, sometimes frustrating yet, completely addictive game.

Despite all you needing to do is tap the screen to bounce the ball, it’s not as easy as it sounds with the added elements of trying to hunt down bonuses, raffle tickets, avoiding traps and the strangely immersive experience when you start getting on a hot streak.

For me, it’s another great game from THNDR Games to pass the time that you can quickly fire up if you’ve got a spare few minutes.

Even if the chances of winning in the raffle are small, I’ve found that doesn’t matter so much as you end up wanting to beat your previous best score so it has that dynamic going for it as well.

This takes the focus away from it being about earning sats and collecting raffle tickets just becomes part of the gaming experience.

Overall, I really like the game and will probably be keeping it on my phone to beat my previous score, the additional sats will hopefully be bouncing their way to my lightning wallet 🙂

British bitcoin pleb falling down the rabbit hole and willing to share every bump, scratch and knock along the way
View more articles from this author
PrevPreviousHow To Spot The South African Trading Program Bitcoin Scam
NextSpend In Fiat, But Save In BitcoinNext