How US Inflation Drives Beggar Thy Neighbour

Home » Articles » How US Inflation Drives Beggar Thy Neighbour 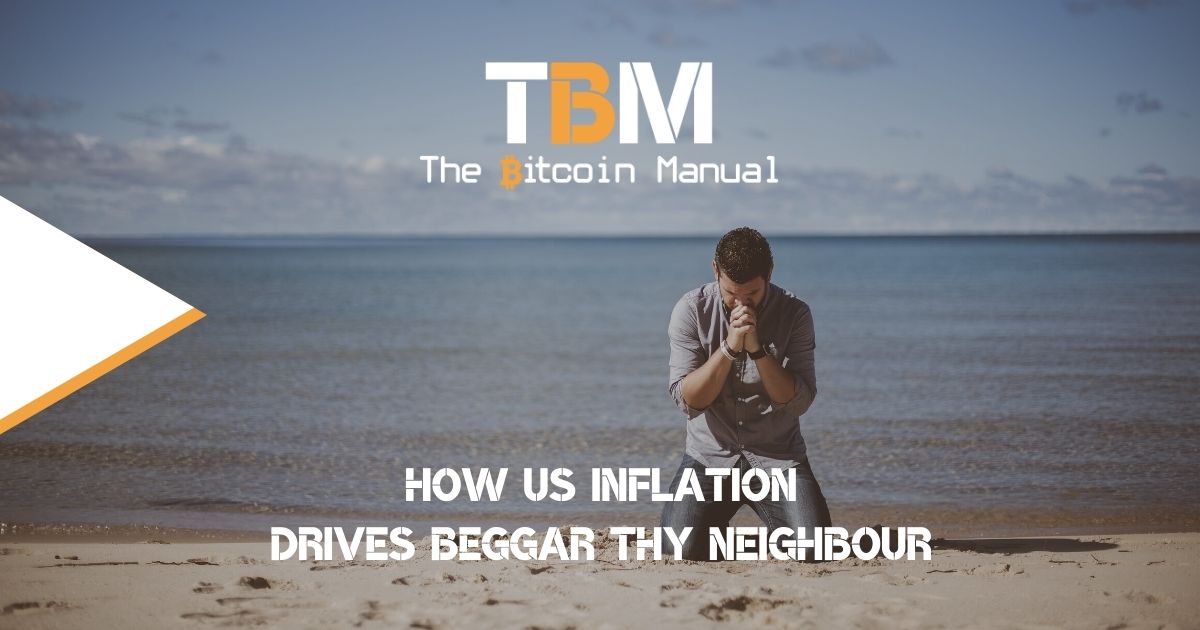 The US inflation numbers are the talk of the town; it seems that the Feds target of 2% inflation was predicably overshot, and they are claiming that the US currently sits at around 6.2%, the highest in three decades. These numbers have naturally triggered the market as investors search for places to protect their wealth from this inflation. The US is still the dominant economy in the world, and when it gets sick, the rest of the world suffers too.

Since they are the world reserve currency and the rest of us are loosely tethered to the dollar, its debasement has further ramifications that US citizens may not see.

You are making beggars of your neighbours.

Living in a globalised world where cross-border trade for goods and services are the norm, settlement of that trade is cleared in dollars. When you devalue the dollar, all these trading partners need to readjust their models to compensate.

So if you make your currency weaker, the rest have to follow to maintain the equilibrium that was broken.

Beggar-thy-neighbor often refers to international trade policy that benefits the country that enacted it while harming its neighbours or trade partners. Protectionism is often seen as a key example of policies that are intended to strengthen a domestic economy but which may negatively impact trading partners.

The beggar-thy-neighbour policies came about, originally, as a policy solution to domestic depression and high unemployment rates. The basic idea is to increase the demand for a nation’s exports while reducing reliance on imports.

However, in recent years due to the dependency on currency debasement to keep economies from collapsing, the beggar thy neighbour policy has become the standard practice for the world.

Fiat currencies are at war with one another.

A currency war is a prime example of beggar-thy-neighbour in action since it amounts to a nation attempting to gain an economic advantage without consideration for the ill effects it may have on other countries. Also known as competitive devaluation, this is a specific pattern of tit-for-tat policies in which one nation matches an abrupt national currency devaluation with another devaluation.

In simpler terms, one nation is matched by a currency devaluation of another in a negative feedback loop. Often the country devaluing first intends to boost its exports on the global market and not necessarily cause harm.

However, in recent years the devaluation was to stimulate their local economy, but because this has long tail effects, the race to remain competitive pushes other countries to do the same.

We are servicing our dollar-denominated debt.

To maintain this peg, countries are constantly issuing more and more debt that has to be serviced in dollars. Debt in your local currency is fine since you can always rig the money multiplier, but debt in a foreign currency is a ball and chain that hangs around your neck. The larger it gets, the more it renders your economy immobile.

The harder it becomes to repay, the more they are encouraged to roll over the debt and pile more debt on top of it, in an endless doom loop. The more debt you build up and roll over the more creditors want to be compensated with a better yield for the risk.

You can see below how the market prices risk when borrowing to South Africa. The more expensive your debt, the more productivity you need to afford the premium and if you don’t earn enough dollars to service it, you need to acquire dollars through debasing your currency.

If we look at South Africa’s floating peg to the dollar, it’s been on a download trend as they are forced to break range due to the increase in debt.

This is how the error correction for the debt they hold and to remain competitive internationally and subservient to the US Dollar.

Savers and labourers are the suckers.

As the debt piles up and GDP doesn’t increase to cover the shortfall, governments need to capture more of the currency in circulation. To rectify the deficit, they issue more bonds to generate more currency units. Those currency units are inserted into the economy to drive up prices and drive up tax revenue.

Now property and assets, there are ways to reduce your tax obligations by leveraging debt, but when it comes to salaried workers and cash savers, there is no hiding. You will pay the bill through both tax and inflation, and you are the chief source of funds used to transfer wealth from local debt obligations into dollars relative strength.

There is no place to hide; as someone who has no assets and is a salaried worker, I can see the effects first-hand.

I can honestly say that I can see my standard of living decrease rapidly; I cannot spend the way I used to in previous years. Sure I may earn more than I did in nominal terms, but those fiat units aren’t getting me as much value as they did in the past. As the cost of energy increases, it forces up the cost of everything and even if we’re compensated with a slightly higher salary, it’s taken from us in higher taxes.

This is the sleight of hand governments play, the accounting trick they lay on us.

We still need to factor in the self-harm.

South Africa is by no means innocent in its economic state; the government has failed its people, it’s long been a kakistocracy. Our welfare policies have driven out the need to work, limiting employment, corruption, and nepotism is rife in many African countries. We’ve also sabotaged our energy production capacity and a host of other blinders of gross capital misallocation.

It’s only further compounded a precarious situation for citizens who are stuck with the reality and, of course, the bill.

Sure Bitcoin has helped protect some of my savings, but I cannot access those savings without a severe tax burden. So there is no point in accessing it unless I want to lose a lot of those gains.

Even if I borrow against my Bitcoin, we don’t have local services, so I would have to borrow in USD or stable coins and then sell the USD local currency. Since I do not earn in dollars, I am taking on the risk of the currency peg breaking further and paying back even more nominal currency units than expected during the loan.

Seeing how the currency performs doesn’t fill me with much confidence, so this is not a risk I plan to take, so all I have left is to HODL. Then use the remaining cash I can spare to run my life with an ever eroding quality and hope that better Bitcoin financial services will come along to help me out of my situation.

I have protection, but I’d prefer not to access it if I can; I don’t see things getting any better in South Africa, so I would like all the insurance I can spare.

I am not sure how this rampant inflation and constant currency devaluation will play out. We could go down with the ship like Zimbabwe or Venezuela. We could dollarise, we could digital Yuanise or Bitcoinise. You already know which option I would prefer, but giving it even a fair 25% possibility of the four options I feel would be way too generous. It’s probably less than 5%.

Corruption and control are the order of the day, and no cost is too high to maintain the status quo. Bitcoin my protect my savings, but it cannot protect the country crumbling around me.

South African bitcoin pleb falling down the rabbit hole and willing to share every bump, scratch and knock along the way
View more articles from this author
PrevPreviousWhy You Should Keep Spare Cash On Hand As A Bitcoiner
NextThe Gift Guide For A BitcoinerNext