Don’t Be Afraid To Be “That Bitcoin Wanker”

Home » Articles » Don’t Be Afraid To Be “That Bitcoin Wanker” 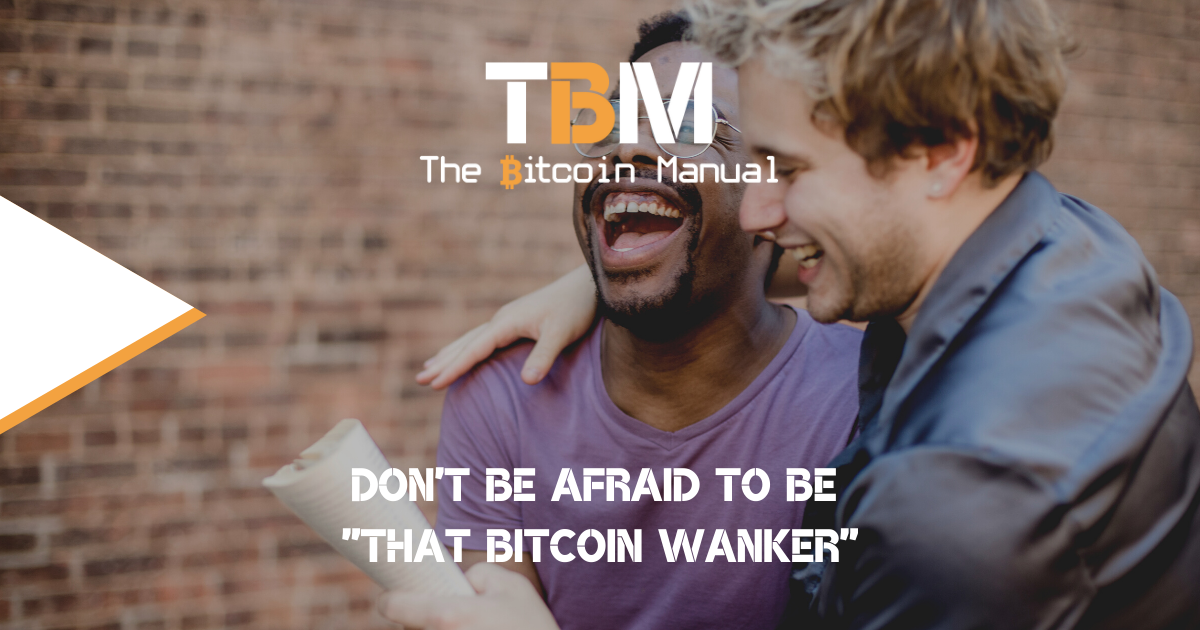 So you bought some Bitcoin, held it for a period, and it’s gone up in value; it’s a great feeling, isn’t it? You’ve been vindicated for your faith in Bitcoin, and you want to share your excitement with your friends and family. If your experience is anything like mine, it would probably filter out like this:

The vast majority will dismiss it; some will be supportive but not take it seriously, some will tell you to shut your trap and then a tiny sliver will take the “risk”.

Don’t take it personally; there’s nothing wrong with Bitcoin, with your pitch or how much your loved ones value your opinion. Bitcoin is a freakishly alien concept to most of us; it takes time, it takes research, it takes work to understand it.

Anyone who says they get it right off the bat is a liar, I’ve been in it for six years now, and I’m actively blogging to document my learnings, and I still don’t fully get all the complexities surrounding Bitcoin. I still learn every day, so if you think someone will jump on the Bitcoin bandwagon from day one, you’re way too optimistic.

We don’t shut up about Bitcoin.

Once the idea of Bitcoin clicks, it becomes tough to avoid bringing it up in conversion; it touches so many areas of our lives that, for others, it can seem annoying.

If you are already in this phase, then you’re probably “that Bitcoin wanker” of your group of friends or family members. Now Bitcoiners aren’t afraid of labels; we embrace them; being a maxi or toxic maxi has been a badge of honour when thrown at us by shitcoiners.

So I say if you’re no coiners are calling you a Bitcoin wanker, let them. They can laugh at you while you laugh your ass all the way to making bank. We’ll see who has the last laugh, won’t we?

But being a Bitcoin wanker, isn’t only about proving your mates wrong it’s also about being that first, second, third touchpoint or that trusted source of Bitcoin information.

Drawing from my experience, I first heard about Bitcoin back in 2014. A friend mentioned it to me, asking me what I think since I work in tech. Yeah, I worked in eCommerce, so my tech experience wasn’t all that applicable. Bitcoin was way out of my league of understanding, so I quickly dismissed it and moved on.

Later that year, I came across a few videos from Andreas Antonopoulos; this was my second touchpoint with Bitcoin. However, this second touchpoint had a much more substantial impact on me, and my blinders were removed. I now had the concept of Bitcoin in my head, maybe not totally consciously, but it was starting to manifest.

My third and final touchpoint for Bitcoin was an interview for a freelance gig with a company called Bitx (now Luno). The startup founder Marcus Swanepoel had a chat about potentially working together and about Bitcoin in general. Nothing came of the conversation, but that third touchpoint was it; I now had to buy some.

If you’re reading this, Marcus, thanks for the final push to get me down the rabbit hole; it’s been one hell of a thrill ride.

Now for me, it took three touchpoints I can remember distinctly. There could have been a few in between that evade memory, but three I remember without a doubt. Now everyone will have their resolve against Bitcoin; three touchpoints could be it; for others, it could be more or less.

Everyone path into Bitcoin will be completely different, so don’t feel disheartened when the vast majority that you try to orange pill look at you like you’ve just come off a three-day bender and you’re not formulating coherent sentences.

Each touchpoint may also be different.

My experience took me three different people to get me to consider buying Bitcoin. I guess that’s the mind looking for validation; the more people who echo the same sentiments, the more you become curious. Sure they could all be bullshitting, but that’s the beauty of Bitcoin; you don’t have to trust a damn thing anyone says.

The information is out there, free and open, and if you’re motivated to check out how it all works, you can participate and validate everything by running a node.

Some touchpoints may be a conversation; some may need a book, others a podcast, a video, a Clubhouse or Twitter spaces. We all learn and engage differently, and there are now way more ways to engage in Bitcoin than ever before.

There are so many amazing content creators and advocates for Bitcoin, and the information is free and open. Perhaps you may not have the analogy or words needed to articulate Bitcoin to your friends, but you can share content they can relate to or dive into in their leisure time.

We Bitcoiners tend to get overly excited and are guilty of information overload when shilling Bitcoin. Hence, it’s nice to give people references they can look at in their time and learn at a pace they feel comfortable within, building their worldview and hopefully conviction.

You have to accept that some are NGMI; it’s part of any economic shift; there will be winners and losers. This time, however, the losers lined up for it; it was all completely voluntary. They had every opportunity to acquire some, be it a hedge or a hail mary in their books, but they had every chance.

You cannot force anyone into Bitcoin, sure you could gift them some now and hope that they keep it, but the ethos of Bitcoin is to take responsibility for yourself and your property.

If people feel that the fiat system’s trade-offs are worth it, you have to let them make that choice, no matter how painful you know it could be for them.

A little tough love, if you will.

They will capitulate with time.

You won’t be able to get everyone on the orange pill right away, and that’s okay; some people prefer to learn and earn the hard way. That’s their journey, and you shouldn’t rob them of that experience; let them eat humble pie but be there to show them how to stack sats when they eventually do come around safely.

Some may seem like they’re not listening, but they’re documenting the things you say, your status updates on social media; they see the optimism you have that can be so infectious. Depending on your stack, you may even be using it now to change your life, like buying that home, quitting that job or starting that business.

The optionality, freedom and confidence given to you by Bitcoin’s price appreciation are all signs that can drive those nocoiners into precoiners as they slowly capitate through the serious of real-world evidence.

I’ve been able to get around eight people into Bitcoin, where they actively hold a balance and continue to add to it, be it monthly, weekly or daily. Most don’t fully understand why it works or how it works, they’re more motivated by the increased worth in fiat terms, and that’s okay. Being in Bitcoin for more than just the gains, for now, takes a special breed at the moment, but this will expand with time.

I have reached out to others who have fallen for the crypto bandwagon, and you know that’s just the journey; if you want to shitcoin, go right ahead, we all have our path to Bitcoin. I know; I too veered off into Shitcoining in 2016-17 but made my way back, so no judgement from me.

The vast majority of people I have spoken to have zero interest in Bitcoin and feel they can live without it based on the current information they have to work with or choose to work with when making financial decisions.

To them, I am still “that Bitcoin wanker”, but you know what? To others, I’ve been their Bitcoin banker.