Note: As a regular citizen and not a member of the political or business elite, I am biased towards having more control and agency over my life, but this doesn’t seem to be a worthwhile endeavour these days. Governments and central banks have long been one entity separated by name only, and now that turn-key totalitarianism has been established as the norm across the world, they can pretty much do anything in the name of “the greater good.”

Lockdowns, travel restrictions, business closures, things that were once seen as unthinkable, are now acceptable practice; we’re living in a time where anything is up for grabs, and if you’re going to roll over for your belly rub once, you can forget about having those rights returned to you.

The world economy died in 2008, and we’ve been in denial since then; labouring on with the help of money printing, we’ve been able to numb ourselves from some of the pain, losing more people to poverty along the way. Instead of taking time to grieve and think about our actions, we patched up the hole with QE, and we’ve been doing it ever since, steadily increasing the volumes as the breaches keep expanding.

In 2020, this one-trick pony’s back started to break, and central banks and governments are looking for something new to keep the can-kicking going.

As I mentioned earlier, 2008 was where it all begun, one solution proposed as a free-market alternative in the form of Bitcoin, we’ve all watched it grow a sizable asset class over the past decade, and its success has mirrored the private market and ventured funded copycats all with their own monetary policies.

As shitcoins failed to replicate Bitcoins success, they’ve tried to swindle new users with all sorts of promises. Honestly, their best shot at it was the emergence of “stable coins”, which was, in hindsight, looks like an incubator for the eventual CBDC.

CBDC stands for “central bank digital currency,” or so they say; you can see I’ve already renamed it, I think more appropriately. This is NOT a new type of currency that governments worldwide are experimenting with most currency is already digital; this is only adding a layer of programmatic features that current digital currency cannot provide.

The marketing pitch for normies is that this “new payment technology”, typically using a “blockchain”, to increase payment efficiency and lower costs potentially is total rubbish. They want to take the surveillance and programmable restrictions that blockchain can offer you and ramp it up to 9000.

So far, China is the furthest along in this arms race; why wouldn’t they be? They’ve got all the technology and the political will to do it. The DY has yet to roll out nationwide, but 40 million of it has already been dished out, and to date, $5.2 billion in transactions have been processed.

As is the case with something from China spreading to Europe, the ECB has announced plans to drop their own dookie coin on their citizens, known as the e-Euro.

(THREAD) We have decided to launch a project to prepare for possibly issuing a digital euro. We will look at how a digital euro could be designed and distributed to everyone in the euro area, as well as the impact it would have https://t.co/KCf73qHOZ8 1/3 pic.twitter.com/eHvpFlH8sq

Murmurs of other CBDC’s

There has also been word that countries like Canada, Sweden, the Bahamas, the Eastern Caribbean Currency Union, and the Marshall Islands can currently be seen as pioneers in the CBDC space.

The war on cash

It’s said that only 8% of the world’s currency is held in physical cash. If the vast majority of fiat money is already digital, what’s this rigmarole about digitising money all about?

Well, you see, cash is a bit of a problem for governments and central banks since it still offers you a few properties that aren’t exactly aligned with their outlook for the future. If you are going to own nothing and be happy, as WEF claim, cash can’t be part of that soceity.

If cash is allowed to exist, it’s a physical representation of insolvency for banks; if there is a crisis in your country and there’s a panic for cash which results in a bank run, no bank can service that demand for physical cash finality. They won’t be able to settle their obligations in a physical method and thus prove the gross insolvency of the fractional reserve system.

Cash allows you to hide from negative interest rates

If cash is allowed to exist, it allows consumers to escape these oppressive policies aimed at forcing you to spend your money now if you’re planning to get the most out of it.

This is probably an element of cash that is lost on many, but it’s so important in today’s society. As you use digital payment methods, be it your bank, a fintech app or your card, you’re creating a digital footprint. Financial service providers track what you buy when you buy and how you buy.

That data can then be mined and used against you; we can already see the power of data mining Facebook can achieve with tracking your clicks, links and eye movements, so what can entities achieve with more financial data?

Cash allows you to make transactions without having your identity tied to them and thus limit your digital footprint.

If cash is allowed to exist, it breaks the value of money set by the government; if they set a certain exchange rate or set price control on certain goods or services, physical cash’s existence will undermine these rules.

We already see this in countries desperate for dollars like Argentina, Cuba, Zimbabwe and Lebanon, where the official exchange rate set by governments is nowhere near the market rate you’re getting trying to secure it from various “black market” agents.

Since cash can be handed over to anyone and cannot be blocked by authorities as easily as they can with digital money, it can be used to fund various programs that may not be what the state wants you to hear or see.

What could CBDC’s do differently?

Just like these gender reveals on TikTok, we don’t know what CBDC’s are going to be like, it remains a mystery, but we sure can speculate. What could you possibly do with trackable programmable money?

Now, doesn’t that sound like a world you want to live in? Where a select few can decide to do all of that with the money YOU earned.

Where Bitcoin fits into the new world disorder

We’ve already seen Bitcoin fight off several state attacks in the past, from bans in Nigeria, China, Turkey and India. In 2021 we’ve seen China ramp up their stance against Bitcoin by pushing out mining operations as they aim to limit capital flight from the country via Bitcoin.

CBDC’s could be another way for governments to try and curb capital flows into Bitcoin. If they can program their money not to be tradable for Bitcoin, it forces exchanges to shut down and pushes people into the P2P market instead.

Sure this can step the capital flow into Bitcoin, but I don’t see it stopping Bitcoin altogether. 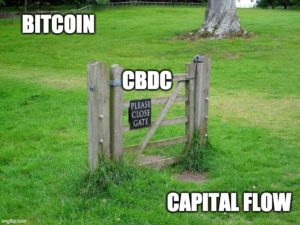 Sure stemming capital flows into Bitcoin will limit the price growth of the asset, in fiat measurement or so CBDC proponents believe, but this could encourage lower levels of HODL’ing reduction and more trading of Bitcoin for goods and services, driving up the velocity of satoshis and increasing the overall GDP generated with Bitcoin as the medium of exchange.

None of us knows what the CBDC will look like yet, what its limitations and regulations are, but I wouldn’t be holding my breath that it will solve the underlying problem fiat faces today.