Bitcoin Is A Peaceful Protest 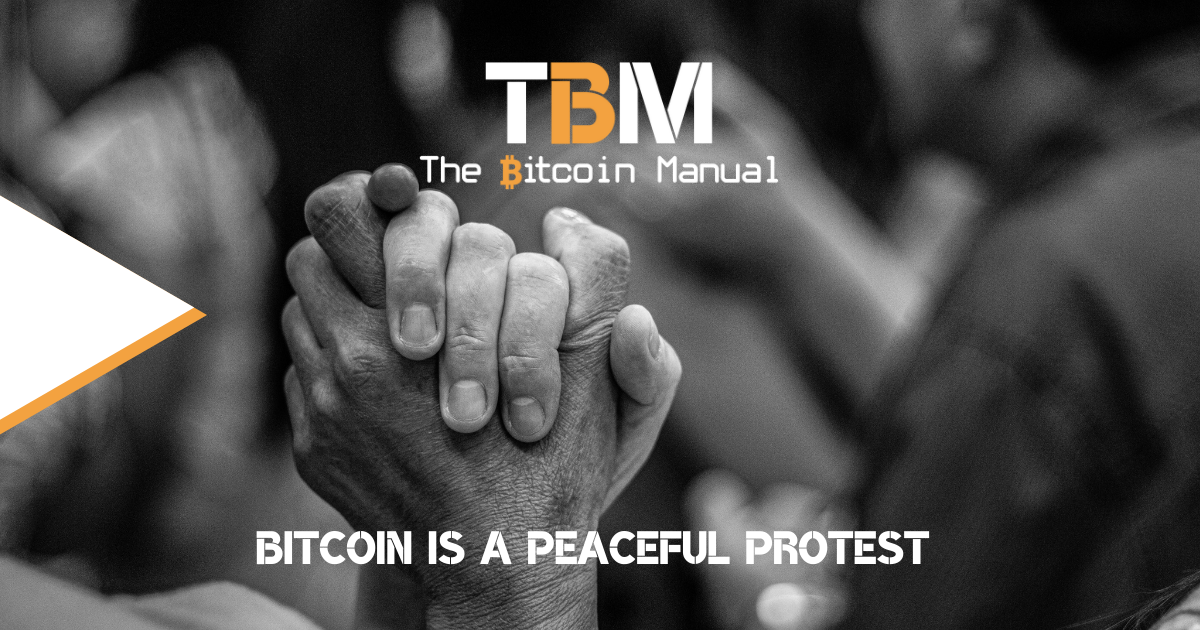 Growing up in South Africa, we’re all too familiar with the idea of protests; it’s in our nature, blood, and culture; we even have our name for it; we call it the “Toyi Toyi”. For those of you who are not familiar with our form of protest, in South Africa, instead of marching around repeating tired slogans, we make it our mission to come up with catchy tunes with a dance to match. To the untrained eye, this may not seem like a protest, but the spirit and the message remain regardless of the delivery method.

Now while it may be a song and dance, these protests do not often end in peaceful resolution; there have been very few protests I can remember that saw a formalised document handed over or demands negotiated. In recent years many of these protests have descended into chaos and, with it, needless loss of life.

I think many South Africans, who feel they have no other option, begin the movement. Still, it eventually attracts opportunities and agent provocateurs who weaponise the ordinary citizen’s grief for their political gain, but this is a story for another day.

The power of protest.

The idea of protests being a successful method of voicing your concerns has been ingrained in every South African through our history. The fall of apartheid was always portrayed with the range of protests and uprisings around the country. While there were plenty of backroom discussions and political debates between leaders, the media focuses on the outrage that pours into the streets.

While I was too young to get involved in the uprisings, being born within the tail-end of the 80s, we’ve always been told about how the protests were integral to the campaign for civil rights. Parents and older family members would entertain us with their stories of clashes with the state, their numerous arrests, their efficient mobilisation without the help of the internet and how these very public stands played a role in forcing change.

I think the next generation saw protesting as a fix-all, if the previous could use it to drive change, then so could we, but it wasn’t and hasn’t been the same.

Modern-day South Africa is still plagued with many problems that stem from a fiat monetary system, and while

It manifests in protests for free health care, free education, the call for cabinet reshuffling, the fall for investigations into political leaders. Still, there has never been a uniform uprising for change. The change is often niche issues that don’t affect all of us the way apartheid did, so you’re never going to get the total weight of the population behind your appeals.

South African’s have yet to realise their money is broken, and it is the root or the method of amplification for many of the problems they wish to tackle. It seems like the elephant in the room, but we keep dancing around it and trying to pick off the birds that sit on the elephant along for the ride claiming this will fix the problem.

However, in economic apartheid, it’s not as easy to pinpoint.

South Africa started roughly in the 1950s and ended in 1994 with our first democratic election. This time of isolation also coincided with the fall of the gold standard, as Bitcoiners would know happened in 1971. Now, if you’re a generation of people who were limited in your ability to be educated, acquire land, certain assets and build or invest in businesses in a country where you are not the world reserve currency, and we move off the gold standard.

Those undercurrents work together to form one of the most unequal societies in the world, South Africa is often paraded as a place with the highest Gini coefficient, and it’s pretty evident today.

My home town of Cape Town is a prime example where a 30-minute drive can take you from world-class wine farms and beach resorts to the most dysfunctional slums in the world. This evident divide and misallocation of resources through a fiat system and poor governance of that fiat system naturally fosters ALOT of anger among the impoverished.

While apartheid in name and in-laws fell, the legacy of it remained in the forms of access to capital. We have apartheid in terms of interest rates, access to financial services, and the apparent nepotism of a government that feels it NEEDS to be the paternal saviour of its voters.

Bitcoin is my protest.

I know it’s our right to protest, but sadly, I don’t see the value of banding together in the streets for one day, hoping that making a kerfuffle will drive change. In the past few decades, I’ve seen how this medium of protest has lost its sting.

We as a society have become numb to it; we speak of demonstrations as if they are a nuisance. Like guys, please avoid this road they’re protesting; it’s become another feature of the system and not a bug showcasing the system is broken.

I can sympathise with my fellow South Africans; I can understand their anger and frustration, I feel it too. But you cannot let anger consume you, or no matter how righteous your goals or message is, it will be corrupted with time. You’ll be so focused on us versus them or getting one over them; you’ll start to slip into more radical methods of making your point.

Bitcoin allows you a peaceful protest on the individual level; you can opt-out for personal reasons. You don’t have to agree with your fellow countrymen idea of how to fix it, but you can decide that change is needed and funding an institution that is failing to fix things is not the answer.

I can’t fix state corruption; I can’t fix the degradation of Eskom and other state-owned enterprises we rely on for infrastructure. I can’t remove nepotism in government. I cannot change policies and regulations that don’t favour me.

But what I can do is take my wealth out of the system that funds the things I disagree with and protest my discontent by limiting the amount I contribute to the government.

I am not telling anyone to stop protesting or voicing their discontent; by all means, all I am saying is there is an alternative. A protest you can excercise daily, a rally where you and your interested parties can mobilise capital away from government and drive real change on a grassroots level.

Holding and accumulating Bitcoin is a protest, and it’s become my protest method of choice.