Layman’s Conversation With A Friend About Bitcoin

Home » Articles » Layman’s Conversation With A Friend About Bitcoin 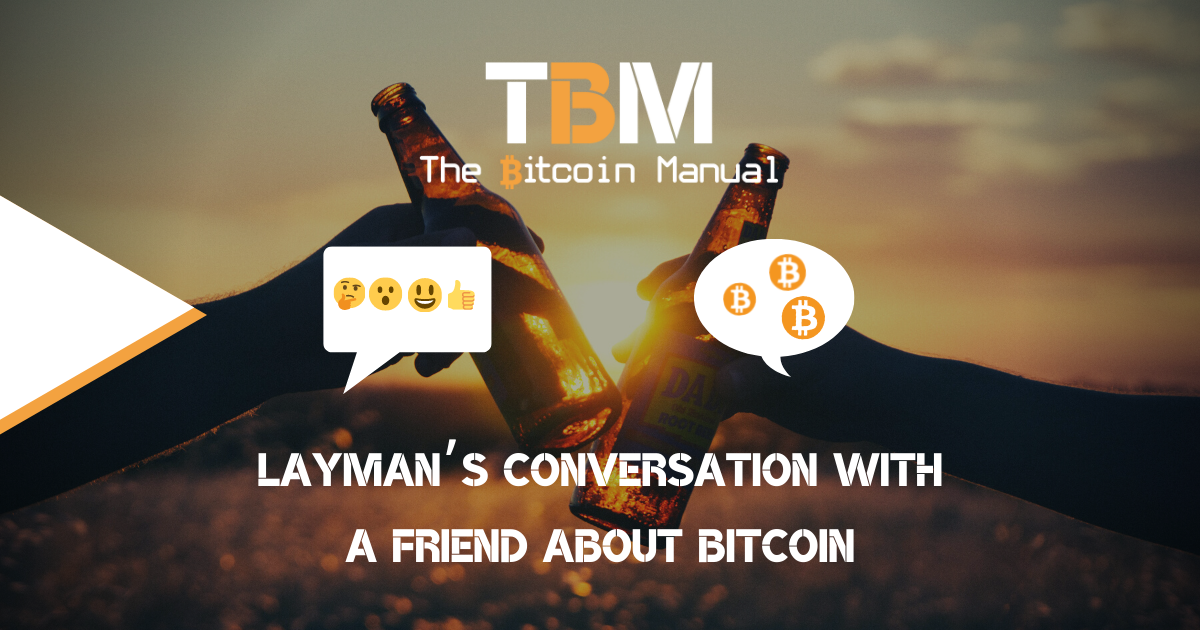 I was on the phone to one of my friends this weekend and we somehow segued in to talking about Bitcoin! If I remember rightly, the segue went something along the lines of:

“Yeah, can’t really get a house either so might as well pump money in to BTC!”
“Oh yeah? How is that going by the way? I was thinking of getting involved with it”

I can now talk about one of my favourite things (other than Liquid Drum & Bass music) – Bitcoin! I’ll float in and out of the conversation in this blog so you get an idea of how it went!

He had been keeping an eye on the price movement this year so saw how the price of BTC has gone up by about 40% in the last 5 weeks since PayPal announced they were looking into using it on their site as early as Q1 next year!

He mentioned he was thinking of buying a whole BTC when everything flash crashed in April due to the pandemic earlier this year and I said, “Yeah I tried to get what I could together to buy some more at those prices”… my friend didn’t unfortunately and he felt he had missed the boat as he wished he’d bought one! As of today (16th Nov 2020), the price of 1 BTC is £12,300 and my friends said he was put off buying at that price.

This was actually quite eye opening for me as I think there might be a general misconception that you have to buy 1 whole coin at a time, otherwise you can’t own any. This is NOT the case though unless you’re able to afford one!

Think of it like this – there’s 100 pence to a pound, 100 cents to a US Dollar etc. You have smaller denominations that make up BTC called “satoshis” or “sats” for short. There are 100 million sats to a BTC so you can buy as much or as little as you want! He did ask if he could buy just 1 satoshi but I said you’d probably have that eaten away by fees when you try to buy it so right now, there’s no point haha!

However, in terms of missing the boat, it really depends on if you believe the price will go higher or lower. He thinks it will go lower and is “hoping for a drop back to £6,000” but I can’t see that happening myself with the amount of institutional investment and smart money going in… it might pull back a bit but not to levels seen at the covid crash. And yes, I also ushered the same words to him as I write below to you, dear reader:

Don’t Understand The Technology Behind Bitcoin

As we were talking about this, I felt that the phrase “blockchain technology” would probably put him off to find out how to buy some BTC so wanted to keep things as relatable as possible. Thankfully, these days, BTC is a lot easier to buy and relate to as money for many, which lead nicely in to the final topic.

CeFi As A Bridge to Understanding Crypto

I started talking about the two apps I use called Celsius and Luno and compared them to his regular banking app because that’s effectively what these CeFi options are. This really helped to explain and move the conversation away from the underlying technology topic as it feels a lot more familiar to show people and help transition in to cryptocurrency in my opinion.

The next time we meet up, I’ll be showing these two apps to him so he can see the simplicity of it. You deposit your money (crypto) and it gains interest like any bank account for holding it in there. Of course, with the UK, the interest rate is 0.1% but if you hold some BTC then it’s 4.5%, a mere 45x more!

And that’s where we left the conversation! We were on the phone for a good 30 minutes talking about this but looking forward to the show and tell on the apps when we next meet up!

Have you managed to speak to non-crypto friends about BTC? How have your conversations gone with them? Or did they never speak to you again after?! Haha! Let me know in the comments below!

British bitcoin pleb falling down the rabbit hole and willing to share every bump, scratch and knock along the way
View more articles from this author
PrevPreviousDeep Dive Into UK Taxes & Crypto
NextWhat’s Your Crypto Story?Next