At What Point Do We Start Thinking In “Sats” Instead Of “Bitcoin”?

Home » Articles » At What Point Do We Start Thinking In “Sats” Instead Of “Bitcoin”? 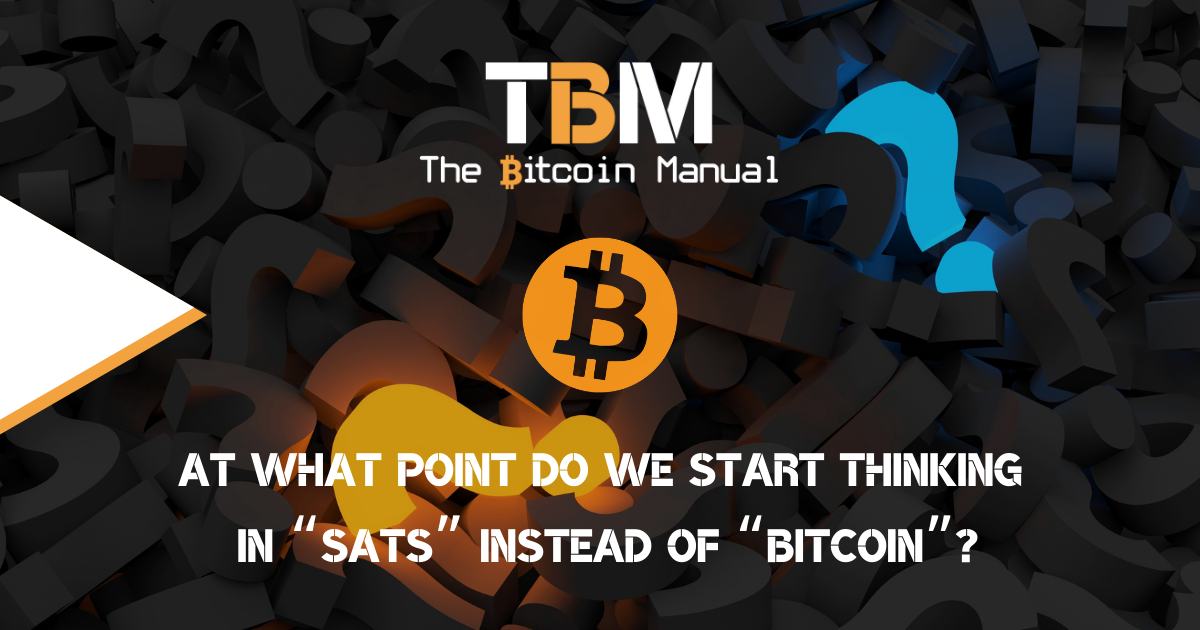 This question is something I’ve been thinking about recently as the price of 1 Bitcoin has gone up, we’re seeing more references to Bitcoin in mainstream media (although they are still very “FUD-dy”) and even in the last couple of weeks, I’ve got a couple more friends and family in to Bitcoin as they started talking about it!

However, as you’ll see quite often when your close ones start asking questions that we all asked when we first got our teeth in to crypto, they will need a lot of help to understand what they are actually buying. My friends have all said they have “missed the boat” as they “can’t afford to buy Bitcoin” so they then start to look at other tokens like DOGE and whatever else they think they’ve heard off and as someone who’s been in for a few years now, you’re like “NOOOOOOOOO” and then the gentle education begins.

Yes the price of 1 Bitcoin now is probably more than what most of us will be able to afford now but that’s not where the tale should end! To get 1 Bitcoin, you need to have 100 million satoshis (sats), which is the smaller denomination that makes up BTC, rather like 100 pence to £1. So you don’t need to splash out £35,000 to buy 1 Bitcoin, why don’t you spend a tenner to get about 28,000 sats instead (pricing at time of writing)?

When I explained this to my friends, the cogs started turning as they didn’t think of it like that – the thought of owning 28,000 of something became a lot more powerful than owning 0.00028 of something! If 1 Bitcoin reaches 6 figures, even 7 figures as some would predict, the price of the sat becomes even more relevant and those of us who check the news on Crypto News apps will know that payments in Bitcoin and other cryptocurrencies will be a thing (Mastercard, Visa, Uber, Tesla, PayPal, Bank of New York…), in some cases, it already is!

Obviously, there’ll be people saying, well, I’ll just use my fiat to pay for groceries – I’m just using this as an example for argument’s sake to show how it would work and the perception of numbers on pricing.

Anyway, this is where the support that we give our friends, family, colleagues etc is so much more important than just showing them where to buy. We’ve all got some experiences and time in the market to share with others, we’re the gurus they will be coming to to ask questions on crypto! It will take time but I’m starting to talk about sats with people rather than fractions of a BTC, even at £35k per BTC!

What about you? Are you thinking in sats these days? If not, at what point do you think you’ll start thinking in that way, if at all? Let me know in the comments below!

British bitcoin pleb falling down the rabbit hole and willing to share every bump, scratch and knock along the way
View more articles from this author
PrevPreviousIs Bitcoin A Hail Mary At The System?
NextCan Bitcoin Force Asset Repricing?Next