Home » Behind The Bitcoin » Nodes » Build A Node

The requirements to run a bitcoin node have purposefully been kept as low as possible, you could run it on any old laptop or desktop device, but it’s not always a practical solution for everyone. Ideally, you would like to have a smaller device that is mobile and energy-efficient that can be plugged in all the time and can run your preffered bitcoin node software. When you have a stand-alone device, you also have fewer attack vectors from other software on the device, and you can have more trust in the validity of the data you get from your node once you’ve set it up correctly.

Building your own node will require a few hardware parts and a little DIY, but it’s not complicated on purpose, so anyone can use it. In a bitcoin standard, individuals and businesses should run nodes. You don’t want to have to trust others validation of the chain’s data and verify it yourself. In addition, you want to contribute to the decentralisation of the network by having more copies of the ledger running. Bitcoin is about creating things for yourself and taking responsibility, so #Buidl your own bitcoin solutions. 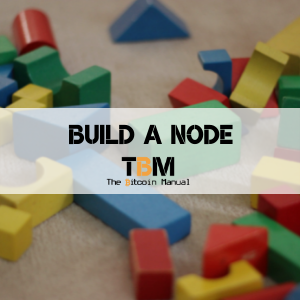 What are the requirements to run a node?

Bitcoin full nodes have certain requirements. Ideally, you want to get better hardware to run your system where possible, but if you cannot get access to hardware, then running a node on weak hardware may work—but you’ll likely spend more time dealing with issues.

If you want to run a node, you will need to meet the following requirements.

Why should your node remain online?

If possible, a Bitcoin node should always be online and maintain connections with other node operators. This will keep your node in sync with the rest of the network and ensure that you can always query your balances.

To allow a Bitcoin node to remain online at all times, it’s better to have a device that only does one thing rather than a computer that’s underutilising its resources.  Many Bitcoin users dedicate a device solely to operating their Bitcoin node.

This offers an additional security benefit if you are also storing funds in your node’s wallet or you are operating a Lightning node or Liquid node.

How to set up your bitcoin full node?

Possible issues with running a node

Bitcoin use is prohibited or restricted in some areas.

Some Internet plans will charge an additional amount for any excess upload bandwidth used that isn’t included in the plan. Worse, some providers may terminate your connection without warning because of overuse. We advise that you check whether your Internet connection is subjected to such limitations and monitor your bandwidth use so that you can stop Bitcoin Core before you reach your upload limit.

Bitcoin Core powers the Bitcoin peer-to-peer network, so people who want to disrupt the network may attack Bitcoin Core users in ways that will affect other things you do with your computer, such as an attack that limits your available download bandwidth.

Buy the parts for a DIY bitcoin node

If you’re looking to purchase the individual parts to put together a node, then check out these items as a base for what you need. You could purchase all these items and set up a node or substitute it for other similar products that you can acquire locally.

Once you have all the parts to assemble your node, you’ll need to select a software implementation you like best, here are some options below to get you started.